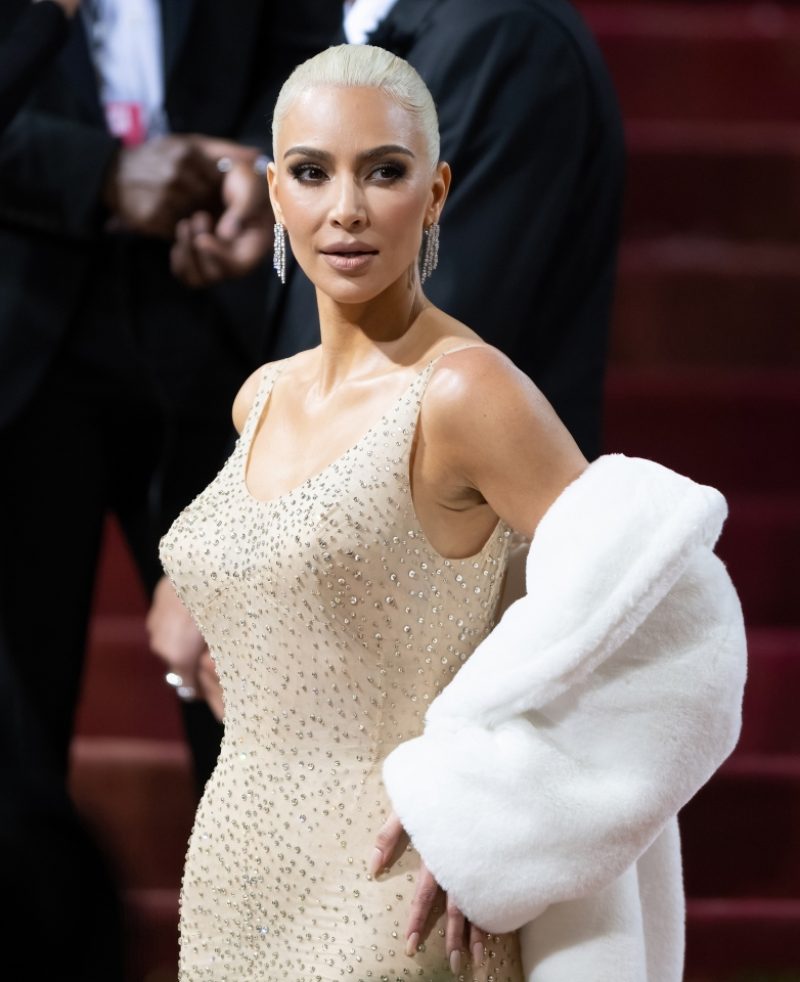 KIM Kardashian has revealed the new levels of desperation she reached in order wear Marilyn Monroe’s gown to the Met Gala.

The star confessed that Ripley’s, the museum housing the famous dress, did not want to allow her to try it on for a second time.

Ripley’s Believe It Or Not! Museum didn’t want to let her try it on again

During the most recent episode of The Kardashians, Kim, 42, told viewers that it wasn’t until her mom Kris Jenner made a phone call that she was able to try on the dress.

In a confessional, she said: “I was like ‘please mom, if you make this happen I’ll marry you!’ I would’ve done everything. After my mom’s conversation, they’ve agreed to let me try on the dress one last time.”

She flew down to Florida after making drastic changes to her diet and exercise routine in an effort to slim down.

Kim appeared topless with only shapewear on her lower half as she tried to slip into the dress, but it still wouldn’t fit over her butt.

Members of her team urged her to “push her a** in” as her assistant finally stepped in to help, repositioning her butt and shapewear to get the dress on.

Although it was on her body, the back wouldn’t close and had to be tied rather than zipped in order for her to wear it.

In spite of this, Kim wore the dress to the Met Gala, which she attended with her then-boyfriend Pete Davidson.

The Saturday Night Live comic didn’t appear in the episode following the couple’s unexpected split over the summer.

Kardashians viewers were shocked as they watched the new episode eager to see a glimpse of Kim and Pete’s romance.

The New York native was clearly edited out and it didn’t sit well with fans .

One scene from the fitting showed a portion of Pete’s body, which fans previously saw in a preview for the show teasing his appearance.

While two wardrobe stylists pin the back of the dress, a man, who dressed similarly and has the same body type as Pete, sits by watching.

Previous clips posted by Ripley’s Believe It or Not! Museum also proved Pete was at the fitting.

Screen grabs of Pete’s crop shots were posted to a popular Kardashian Reddit page, where fans sounded off.

One speculated: “This season had to be 100% reworked after they broke up. I can’t imagine they didn’t have him sign a release upfront. What happened!?”

Another wrote: “It’s a shame, i bet his commentary during this scene would’ve been fun.”

“Omg he was there for this. This may have been the beginning of the end. My husband would be mortified if I was acting like this about a dress that didn’t fit,” wrote another fan.

Kim’s attempts to fit into the gown stretched through the episode.

During a previous dress fitting, Kim looked close to tears as she realized that she was not then slim enough to fit into the historic piece, which was custom-made for Marilyn in 1962.

During a lunch with her sisters Kourtney and Khloe Kardashian, Kim revealed that Ripley’s Believe It Or Not! museum initially shelved plans for her to wear it.

“They just pulled the whole thing from me and I’m fuming,” she began.

“I had to try the prototype first and see if that fit, and once it fit they sent the original.

She walked the red carpet of The Met Gala wearing the original gown with her then-boyfriend Pete before she changed into a replica for the rest of the evening.

Kim continued losing weight in the weeks and months that followed.

HuluIn the end, a call from Kris Jenner led to her getting the second chance[/caption]