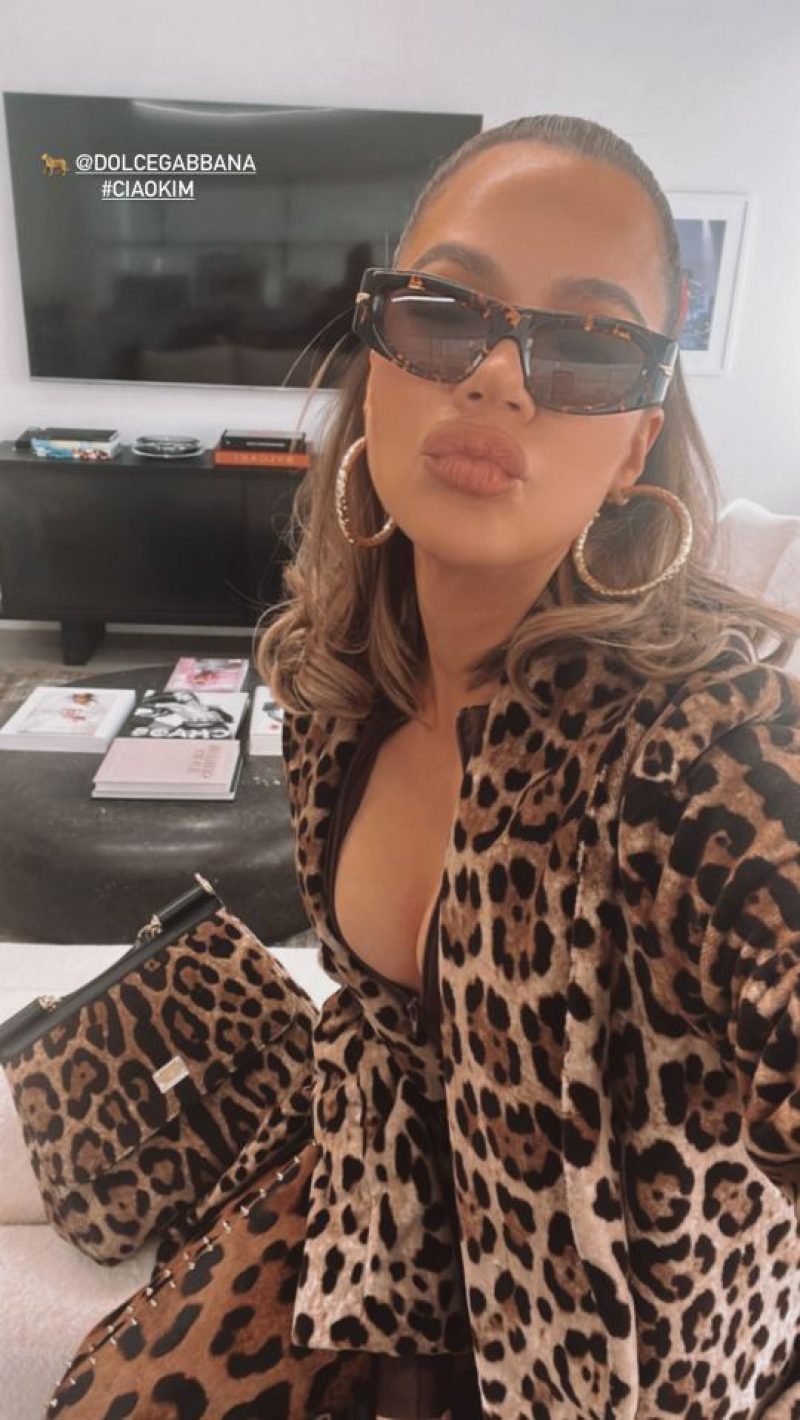 KHLOE Kardashian has flaunted major cleavage in a low-cut top amid claims she looks unrecognizable with a seriously plump pout.

The star posted both photos and videos showing off her look for the day and fans are buzzing.

The star posed in a leopard print jacket and brown low-cut one-piece.

She had sporty sunglasses on her face and large gold hoop earrings in her ears.

Her hair was styled in a half-up, half-down look but fans couldn’t focus on anything other than her plump lips, which seemed to be bigger than ever before.

Khloe gave fans a full glimpse at her outfit and accessories in a photo posted after the clip.

She appeared to be sitting on her knees, showing off even more leopard print.

A bag was sat next to her in a similar print and she puckered her lips at the camera.

It’s unclear what Khloe was doing, but it seems she was doing it along with her siblings.

The clips were filmed inside the Kylie Cosmetics offices.

Kourtney kicked her feet in the clip, holding a bottle of Lemme vitamins in one hand.

The siblings gave no indication as to what they were working on and it appears Kourtney and Khloe’s decision to rock animal print was merely a coincidence.

In Khloe’s video of her older sister, she could be heard saying: “The fact that we both showed up in leopard and I think it’s Dolce leopard? Meant to be.”

Fans have been focused on Khloe’s appearance as of late, with many worried about her weight.

She shocked fans as she showed off her thin frame during a recent episode of The Kardashians.

The Good American founder’s thin arms, tiny waist, and skinny legs were on display as she was measured for her Met Gala dress.

Kim Kardashian, 42, was present at the fitting, which was at her sister’s house.

Designer Jeremy Scott, 47, then chimed in: “Your measurements are smaller than the models that would do the show so you should know that that little waist is teensy itsy bitsy.”

She stood in the corset top of her gown sans pants, showing off her thin arms, shrinking waist, and stick-like legs.

Some fans have worried that Khloe’s weight loss is due to stress, noting that she seemed to really slim down amid news that Tristan Thompson had been unfaithful once more.

Khloe has been open about how difficult the drama has been for her.

PrevPreviousKim Kardashian’s baggy sweatpants struggle to stay on her thin frame as she wrestles with daughter North, 9, in new post
NextDylan Dreyer fans beg Today host ‘don’t apologize’ after she reveals hidden insight into her homelifeNext