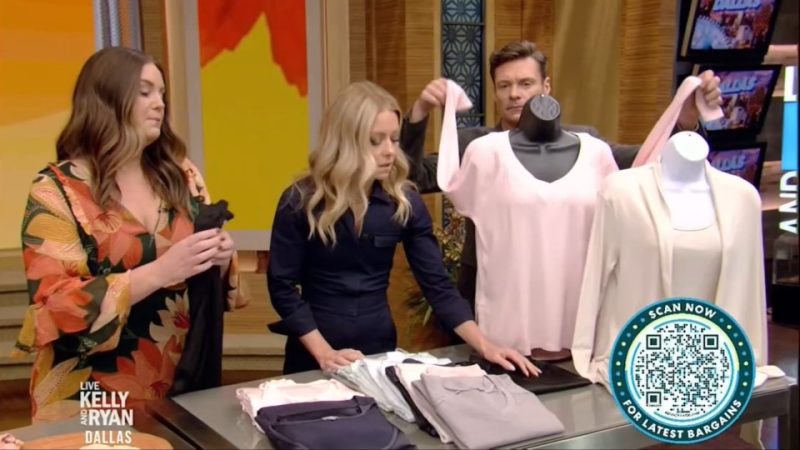 LIVE’S Kelly and Ryan have been teased by their guest for their strange actions on camera.

The talk show hosts were in a silly mood while showcasing bargain fashion items during Friday’s show.

The moment occurred while Kelly and Ryan were introducing their guest, Monica Mangin, for the Back 2 Back Bargains segments.

The duo – recording live from Dallas, Texas – playfully welcomed Monica by standing behind a set of headless mannequins.

Ryan first placed his chin on top of one mannequin dressed in a cream-colored tank and a matching sweater.

“Welcome back. All of our bargains today are at least 15 percent – the 47-year-old began before noticing Kelly struggling to reach her chin above the taller mannequin behind him.

“Here, you want this one?” he volunteered to his co-host, who then switched mannequins to finish their introduction.

“Are at least 15 perfect off,” Ryan continued, repositioning his chin over the taller mannequin while Kelly occupied the other.

“You can simply put your smartphone camera at the QR code at the corner of your screen!” the TV personality squealed, eliciting a laugh from the audience.

Kelly chimed in, saying, “right there, there it is!” pointing out the QR code at the bottom right of the screen.

“Let’s get shopping with Monica Mangin,” Ryan announced while flexing his right arm in front of the mannequin.

Monica awkwardly laughed at the co-host’s introduction, replying: “You guys are ridiculous.”

This wasn’t the first time a guest called out the Live With Kelly and Ryan hosts for their behavior on set this week.

On Monday, the pair welcomed The Talk’s Sara Gilbert, who appeared on the show to promote the new season of The Connors.

During a discussion about health and fitness, Ryan told the Roseanne star, “We have veganism in common!” although he admitted, “You’re probably more strict than I.”

Sara, 47, immediately hit back: “Right. Because you’re not a vegan.”

As the audience laughed, Ryan tried to explain: “When I eat plants… I’m a vegan! And when I cheat, I cheat.”

The actress decided to put this to the test, asking the American Idol host: “What’s in your cup?”

“My cup… this is H2O,” he said innocently as he leaned over to show Sara the contents.

“So you only drink water, you don’t eat food?” she clapped back sarcastically.

Ryan then decided to come clean about his diet, as he revealed: “I think the thing for me is, I try and eat a lot of plants, but I love everything. But for you, you are strict, right?”

Sara explained that she abstains from dairy, although she occasionally takes a “tiny bite” of home-baked cookies from her friend.

Elsewhere during the episode, Kelly had an uncomfortable moment with another guest, who she warned about discussing a particular topic.

Kelly and Ryan chatted with Richard Elliot, the local correspondent for WSB-TV in Atlanta, GA, where the hosts were filming from that day.

After Ryan asked Richard if there was “activity” happening in Georgia that day, the correspondent confirmed that there was due to it being the day before election day.

“Now, what can you tell us about fall in Atlanta? We’re not going to talk politics because Gelman gets upset when we do, so tell us about the fall,” she told him.

Richard nodded his head as Ryan cracked up.

“People who have been talking about politics for the past few months are probably pretty happy that we’re talking about something else,” Richard said.

He then went on to talk about the weather and what he loved about Atlanta.