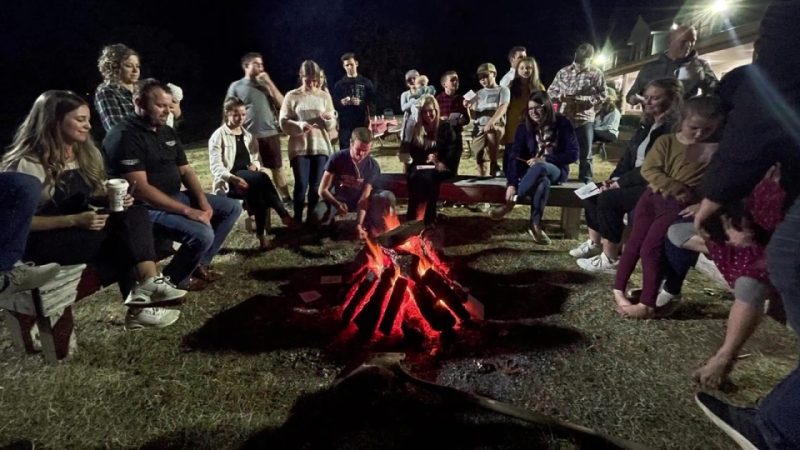 DUGGAR fans have become convinced that a key member of the famous family secretly welcomed a baby after spotting “proof.”

Rumors have been swirling about more private members of the TLC family expecting more children.

Toward the end of the clip, Jed and Katey seemingly shared proof that Josiah and Lauren and Joseph and Kendra welcomed new additions to their families.

Late in the clip, Jed and Katey switched from video to photo, sharing stills from the family fun day.

One of the photos – grabbed and shared on Reddit – captured several members of the massive family – including Josiah and Lauren – enjoying a hayride.

While John-David’s daughter Grace was seated in front of Lauren, she was situated in such a way that the small baby Lauren was holding – believed to be the second child she and Josiah were rumored to be expecting – was almost fully visible.

Over the summer a tumblr account began speculation that the couple had quietly welcomed another child.

In June, 20-year-old James Duggar shared a snap of himself cradling a newborn baby, who was unfamiliar to fans of the Counting On family.

In the image, James smiled in a parking lot while cradling the blue-eyed newborn, who was dressed in a blue-and-white striped babygrow.

Jim Bob and Michelle’s 13th child did not add any additional information to the post, leaving Duggar fanatics in a frenzy to try to detect who the new baby is.

On a Reddit thread, one user reshared the photo and asked if it was potentially the reclusive Duggar couple’s new addition.

One fan replied: “I think someone on Tumblr said Lauren’s baby had been born (there was a photo).”

Another user agreed: “He does resemble Josiah.”

However, the private couple has not confirmed any news of a second child.

Josiah and Lauren’s rumored baby is not the only potential Duggar youngster revealed in the video either.

The pair keep a low profile and have not joined the swaths of Duggar kids posting about pregnancies on social media as of late.

The video closed with another photo from the gathering that showed several family members hanging around a fire.

Eagle-eyed fans spotted what looked to be Kendra cradling a baby.

The picture was snapped in the dark, leaving the figure shrouded in darkness.

While it was difficult to tell if the figure was in fact Kendra, fans on Reddit seemed convinced.

“I watched the video all the way and it’s definitely Kendra!” one user wrote.

Some, however, speculated that it wasn’t her own child she was holding.

They, like Josiah and Lauren, have not addressed the pregnancy rumors.

Speculation began back in March after fans spotted a person that looked like a very pregnant Kendra at Jeremiah Duggar’s wedding.

One social media user grabbed a still image from the wedding clip, which appeared to show the Duggar wife moving about in her seat.

She looked to be standing up, chatting with other guests.

Kendra wore a blue dress that met all Duggar family modesty standards – covering her shoulders and knees – while also accentuating what appeared to be a growing bump.

Fans sounded off on the Reddit thread about the potential new Duggar family member.

“This poor girl is going to have 4 kids under 4 before she is even 24,” one commenter wrote.

Another added: “Joken’s 5th wedding anniversary is this year and by then Kendra will have spent 3 out of those 5 years pregnant… 60%.”

A third fan seemed worried, writing: “How old is their youngest? I thought they were just coming up on a year, but Kendra looks at least 6 months pregnant here.

“That would mean the spacing is even shorter than usual and that doesn’t bode well for the future.”

Another commenter wrote: “Oh god she doesn’t even turn 24 until mid-August, she will definitely have 4 kids under 3 at 23!!!”

Rumors had been swirling for a while at that point after photos of the couple made their way onto Reddit.

In the first of several snaps, Kendra had on a black and white striped shirt with a tan blazer over top as she posed with her in-laws.

In a second photo, Joseph hugged his mom as Kendra laughed beside them.

In both, the reality star appeared to have a growing bump hiding beneath her top.

Others rushed to the comments section to weigh in.

“She’s due to announce at any time, so I wouldn’t be surprised,” one wrote.

“At this point we should rather speculate if it is possible that she is NOT pregnant,” a second cracked.

“I like to assume the members of the fertility cult are pregnant unless they state otherwise,” a third added.

“I don’t like to speculate on a woman’s body but based solely on the fashion choice I have a hunch.”

“Uh, yeah. Considering her last baby was born in February of last year, I have no doubt. Poppin’ them out like Pez up in here!” a fifth joked.

A final fan noted: “That shirt is a maternity shirt, I have the same one in green and white, so probably.”

Refer to CaptionLauren and Josiah, for their part, are already parents to a two-year-old named Bella[/caption]