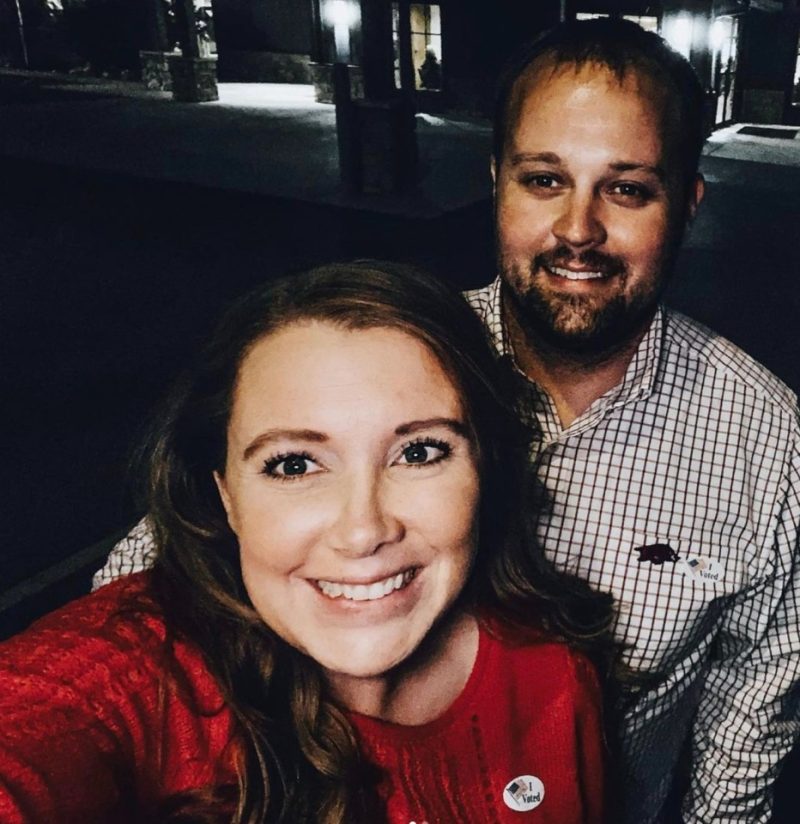 ANNA Duggar has defied her family’s strict dress code in a new photo while her husband remains in prison.

The reality star appeared to rebel against the Duggar’s guidelines while attending a family function.

Anna, 34, joined her extended family for the backyard get-together with her and Josh‘s seven children.

In a snap from the party circulating online, Anna was spotted standing alongside her siblings-in-law as they said a prayer.

While everyone else had their heads down during the prayer, Anna looked straight ahead while holding one of her kids.

She wore tight blue jeans, a green shirt, and a tan jacket to the outing – a different look than her usual long skirts and dresses.

The Duggar ladies are encouraged to dress modestly and not wear clothing in a revealing manner.

Since Josh’s prison sentence, Anna has tried to maintain a close relationship with her husband’s family.

However, The Ashley’s Reality Roundup recently reported that Anna and Josh’s relationship has been rocky amid her attempts to visit him frequently while he’s behind bars.

Josh, 34, was sentenced to more than 12 years behind bars for receiving child pornography in May of this year after being found guilty of the crime in December of 2021.

According to the outlet, Anna has made the six-hour trek from Arkansas to the Federal Correctional Institute in Seagoville, Texas, to visit her incarcerated husband every other weekend since his imprisonment.

Facing the reality of the situation and the weight of Josh’s over a-decade-long prison sentence, Anna has begun looking for places to relocate that would be close to Seagoville.

This decision reportedly has not gone over well with Josh, as he believes that his sentence will be overturned once his appeal is granted.

The Ashley’s “behind-the-bars” source revealed: “[Josh] thinks he is going to beat his appeal and feels his wife’s move is unnecessary. He tends to think they are going to reverse his case.”

They also divulged, “Josh and Anna had a dispute on the phone and Josh went two days without talking to her, which is big because he calls every day.”

The source has also claimed that Anna looks “tired, broken, and worn out” during her visits with her husband and that “his actions appear to have really affected her.”

As was previously reported by The U.S. Sun and according to Ashley’s Reality Roundup, Anna has recently purchased Josh faith-based books that she hopes will heal their relationship.

“She sent him the book Draw Close: A Devotional for Couples,” a source said.

According to its online description, the book aims to bring its “readers’ devotions to help them increase their intimacy with God and each other.”

Earlier this month, the U.S. Sun exclusively reported that Josh filed an appeal in his child pornography case from inside federal prison after requesting several extensions.

The court docket simply reads: “Appellant brief of Mr. Joshua James Duggar submitted for review. The time for filing the subsequent brief (if any) does not begin to run until the brief has been approved and filed.”

It appears he also filed an addendum to his appeal, which is also locked at this time.

He then said to Josh: “You have done some very bad things. But in your life as a whole, you’ve done good things. … The true test of a man’s character is what a man does when no one is watching.”

Josh was arrested in April 2021 and charged with two counts of child pornography.

Instagram/Anna DuggarAnna is considering moving to be closer to the prison, but Josh is convinced his sentence will be overturned[/caption]