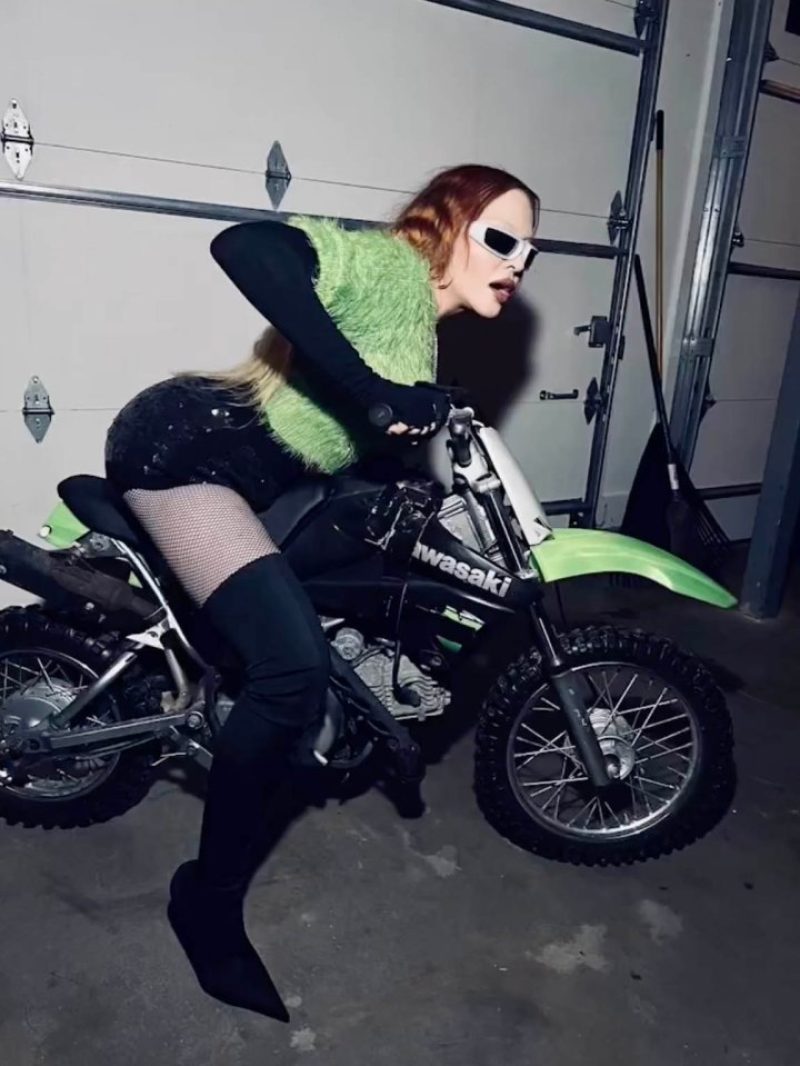 MADONNA has left fans “disgusted” after drinking water from a dog bowl in her latest bizarre video.

The singer, 64, posted a video showing her wearing a green sweater and hotpants and posing in sexually provocative ways.

Madonna teamed her sweater with tights and thigh-high boots as she posed alongside a motorcycle and a food pantry.

Things took a turn when she then began posing explicitly with a sriracha bottle.

The video ended with the Vogue hitmaker crouching on all fours and licking water from a bowl.

Critics flooded the comments to slam the “desperate” video and begged Madonna not to “ruin” her legacy.

One wrote: “Come on, that’s disgusting. Think about it, you got kids.”

Another added: “This is all screaming desperation to stay young or relevant. The last thing any of us would have expected from Madonna.”

A third posted: “After 40 years of being an artist, your form of visual art went down to licking a dog bowl !!

“If you’re creatively dried out..let it be… don’t ruin it for your lifetime fans who are used to getting the best out of you…”

Madonna’s new video comes one week after she showed off her “scary” new look with plaited red hair and bleached eyebrows.

She showed off her transformation while angrily lip-syncing to the song Vent by Kendrick Lamar and Baby Keem.

Madonna has been making headlines with her recent posts on social media.

Last month, the music legend made a bizarre ten-second video on TikTok in which she appeared to come out as gay.

Captioned “If I miss, I’m gay”, the clip shows Madonna throwing a pair of pink underwear at a bin — and missing.

Madonna has a long list of famous male exes, including Michael Jackson and rapper Tupac Shakur.

The singer ended her three-year relationship with 28-year-old dancer Ahlamalik Williams in April.

The Cherish singer sported a pair of fancy shades while appearing to have dyed or shaved off her eyebrows.

The pop icon rocked purple streaks mixed in with her blonde hair.

She showed off her sharp acrylic nails with gold bracelets embellishing her wrists.

In the following post, the hitmaker shared a closeup of her face as she removed her shades.

Madonna still wore the leather jacket with more jewelry around her neck as she captioned this post, “Also Top.”

PrevPreviousToday’s Carson Daly forced to sit in the corner as he’s snubbed on live TV during group segment with co-hosts
NextWho is Travis Scott dating?Next