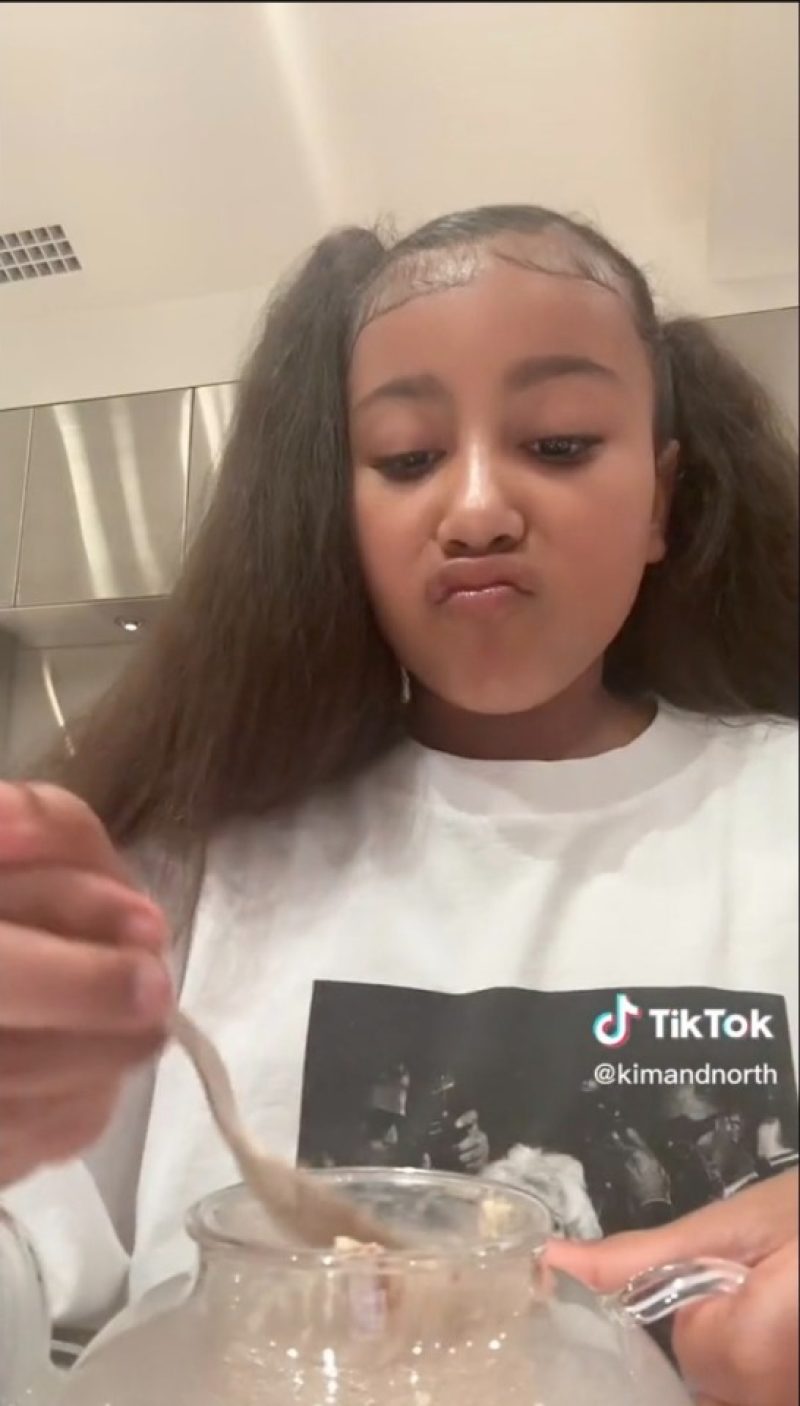 KIM and Kourtney Kardashian’s daughters North and Penelope have made a disaster out of the kitchen in a new TikTok video.

The cousins have been very active on the social media platform as of late, posting several videos over the course of the week.

Posted to North, nine, and Kim‘s shared TikTok account, the video shows the nine-year-old and her cousin, Penelope, 10, making a tasty, Fall-time treat.

The recording starts with North announcing, “Make a hot chocolate with me and Penelope!”

North’s sped-up voiceover proceeds, over background audio of TLC’s No Scrubs, as the girls prepare their chocolatey beverages.

Kim’s daughter explains, “We’re just going to pour the milk and have it spin, spin, spin,” as the video shows the girls adding milk to a Nespresso frother and dropping chocolate bombs into “really cute” miniature glass teapots.

The TikTok shows North and Penelope impatiently waiting for the almond milk to finish frothing before pouring the steaming dairy substitute into the prepped teapots.

“Now we’re going to mix it up,” announces the nine-year-old as the video depicts her doing just that.

North is shown wearing a t-shirt that has a photo of her mom, surrounded by photographers, printed on the front.

The video then cuts to the hot chocolate being poured into a glass mug and the teapot’s lid soon tumbles in after it.

In the video’s closing moments, TikTokers can hear North screaming “and it’s so good. Delicious!” as she records herself making a mess of the dishes in the sink before cutting back to the finished product.

Fans were shocked at how grown up both Penelope, and North appear when they posted a video from their sleepover earlier this week.

The slumber party video was again posted to Kim, 42, and her daughter’s shared TikTok account.

The recording shows the cousins singing along to Katy Perry‘s 2010 hit song California Girls inside a darkened room.

North shows shades of dad Kanye West‘s mastery of the stage as she lipsyncs the lyrics while wearing an oversized hoodie and rocking braided pigtails.

Just like mom Kourtney, 43, Penelope gives a much more reserved and subdued performance as she belts out the words.

The pair recently posted another TikTok, this time shared on Kourtney and Penelope’s joint account.

The video shows North and Penelope, accompanied by the Poosh founder, walking into and then out of the frame.

The TikTok begins with 10-year-old Penelope giving the camera a thumbs up before moving forward and allowing North to step into the shot.

Penelope, who fans have expressed looks “grown up,” wears a black-and-white baseball cap over her long red hair with a matching band tee shirt.

The text on the video reads, “Please don’t tell anyone. OK, we won’t.”

On theme with the caption, North shushes the camera as she follows after her elder cousin.

She’s shown wearing an oversized shirt with her hair slicked back into a ponytail.

Finally, Kourtney saunters into the frame, the Keeping Up With the Kardashians alum also holds her index finger up to her lips as she struts in and out of view.

The video was reposted on a popular Kardashians-dedicated online forum.

One person wrote: “Aw, this reminds me of when me and my cousins used to take random videos on my pink cannon digital camera.”

While a second fan commented: “This is so cute lol.”

Kim shared the video of her busting a move along with her daughter on the pair’s shared account.

The recording shows Kim and North dancing along to a Katy Perry, 38, performance playing on their TV.

The Hulu star wears a baggy tracksuit as he jumps, twists, and spins with the beat of the music.

Her platinum blonde locks bounce from side to side as she nearly disappears inside the oversized jacket.

The pants appear to swallow up Kim’s thin legs as the bottoms hang loosely at the grooving reality star’s waist.

North played camerawoman but also got in on the fun too, as she cut a rug while wearing red pajamas.