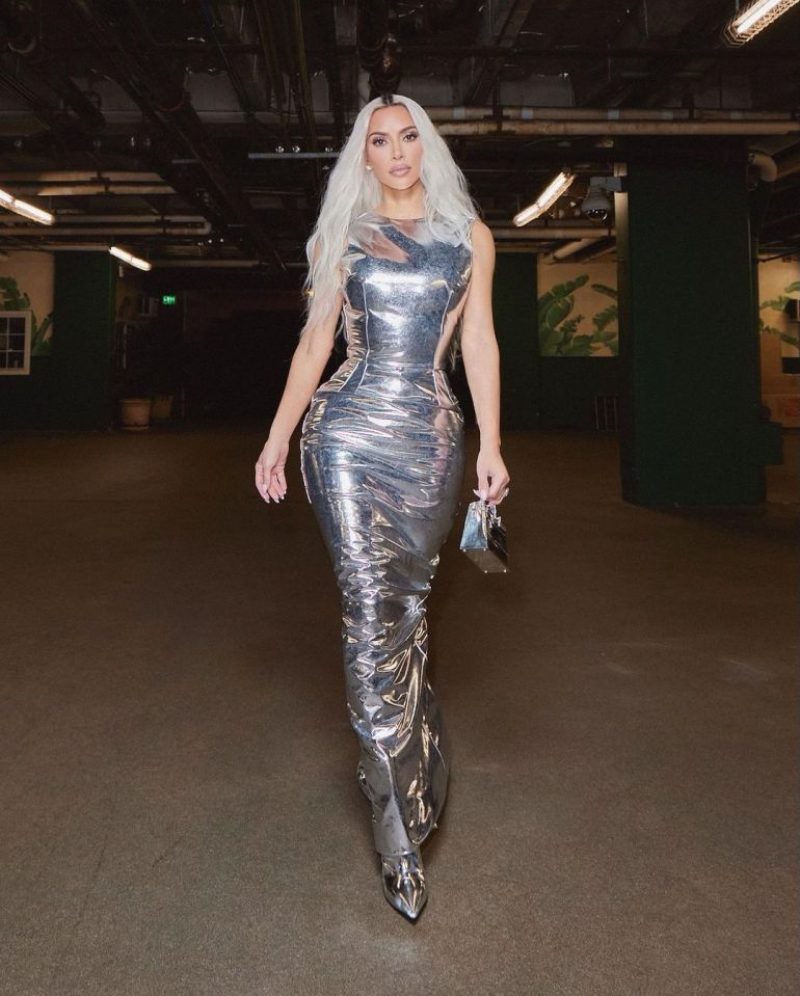 KIM Kardashian has continued to show off her shrinking frame, in various social media photos.

In her latest Instagram post, Kim, 42, dons a silver bodycon dress that hugs her body enough to show her tiny waistline.

The Skims founder shows herself walking in a parking garage, on her way to an event, strutting her stuff in a long metallic gown.

In one shot, the blonde bombshell throws up peace signs and puckers her lips at the camera.

Kim captured the series of photos: “just happy to be here.”

One wrote: “And here I was wondering where all my foil goes, now I know!!”

“Girl PLEASE wear something normal for once,” begged another fan.

Another questioned: “Just happy to be there…in a car park…?”

Kim recently raised eyebrows after revealing the drastic way she went about losing extra pounds in order to fit in Marilyn Monroe’s dress for the Met Gala.

Episode eight of The Kardashians shows mom-of-four Kim getting ready for the 2022 Met Ball.

Kim was determined to wear the jeweled gown and went to drastic lengths to shed the pounds.

Halfway through the latest installment of the reality TV show, Kim was seen heading into her home gym and putting on a black baggy sauna suit.

Speaking to the camera as part of her confessional, Kim said: “So I fit into the dress but I’m not going to stop working out.

“I have this sauna suit and I put it on and it makes you just sweat, even if it’s just water weight, it will help,” she added.

Viewers then got a glimpse at Kim on the treadmill as her petite frame drowned in the unflattering workout suit.

As she conducted her power walk on the machine, Kim told the cameras: “This feels exhausting but it feels like a movie role, you know, how like an actor will lose weight, gain weight for roles.

“It feels like my role is Marilyn Monroe. I’m determined,” she added.

Fans are well aware that Kim did in fact wear the vintage dress to attend the 2022 Met Ball in May after losing 16 pounds in three weeks.

Last month, The Sun exclusively revealed that she “loves how skinny she is” and planned to drop two more pounds so that she could be under her goal weight.

The insider said at the time: “Kim does not want to put on weight as she thinks she has never looked better than now.

The source added that Kim – who lost 21 pounds over the summer – had sugar for the first time in weeks at her 42nd birthday party in October.

“She calls it that but it’s basically just chia seeds mixed in with her nutritional powders and 1/2 liter of water – because it fills her up and has no calories.