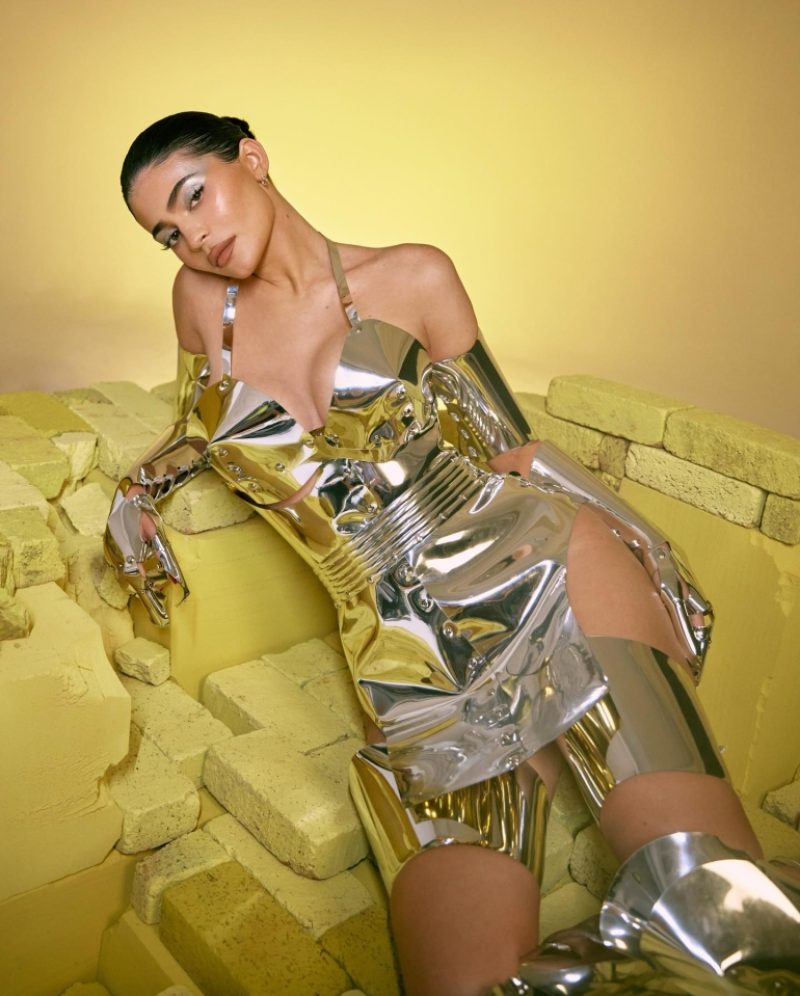 KARDASHIAN fans have mocked Kylie Jenner after she shared a promotional image for her makeup brand on Instagram.

Kylie Cosmetics’ latest collection pays homage to the 1939 movie The Wizard of Oz, and Kylie decided to channel her inner Tin Man.

In the sexy shot, Kylie flashed the flesh in a metallic silver mini dress which featured a cone-style bust and a cinched-in waist.

The Kardashians star teamed it with matching gloves and shin-pads as well as a pair of silver heels.

Kylie wore her dark hair pulled back in a sleek bun and modelled a silver eyeshadow from her new makeup palette.

As she pulled her best smouldering look for the camera, Kylie balanced precariously on a pile of yellow blocks that had been made to look like bricks.

The post was captioned: “Follow the yellow brick road. Our Wizard of Oz exclusive collection just launched on KylieCosmetics.com!”

Kylie Cosmetics fans were divided with the new promotional images and commented in their droves.

“in love with wizard of oz and in love with kylie so i have to buy it,” one person admitted.

Another said: “Wooooow,” while a third person added: “FAV COLLECTION EVER.”

Someone else commented: “Love this so much,” while a different person posted: “SOOOOO AMAZING WOW.”

However, when one person shared the images on Reddit, other fans were less complimentary about Kylie’s look.

“Yellow bricks not on the street just look like weird blocks of cheese,” one person mocked as someone else replied: “I thought she was sitting on sponges lol.”

Another person commented: “I literally thought this might be a new SpongeBob collab.”

A third person wrote: “Why did I think this was a huge pile of cheese blocks, sheesh thank goodness for the caption is all I’m saying.”

Someone else commented: “this is quite literally not a makeup ad. it’s an excuse for kylie to play dress up.”

However, a few others praised Kyle and said: “Damnnn Kylie! She looks f**king great, and I love that dress / look so much,” while another simply wrote: “This serve.”

The new collection comes days after The U.S. Sun exclusively revealed that Kylie has revived her Kylie Swim trademarks after they were “dismissed” on July 11, 2022.

Kylie was originally scheduled to reactivate her trademarks on July 25; however, the applications didn’t process until October 24.

However, Kylie Swim may potentially be rebranding, as her trademarks are now submitted under the shortened name “KSWM.”

Although the brand is still listed as “Kylie Swim” on the star’s Instagram bio.

Kylie Swim’s website has still been active during her downtime on her project, although most of the styles are sold out.

Some of the brightly colored styles are still available for purchase with the pieces ranging from $40 – $60.

When Kylie was first launching her swimwear line back in September 2021, she had just announced she was pregnant with her second child.

Now, after his birth in February 2022, fans still do not know the baby boy’s name.

Kylie has been giving her full attention to her newborn child and Kylie Cosmetics as Kylie Swim has slipped through the cracks.