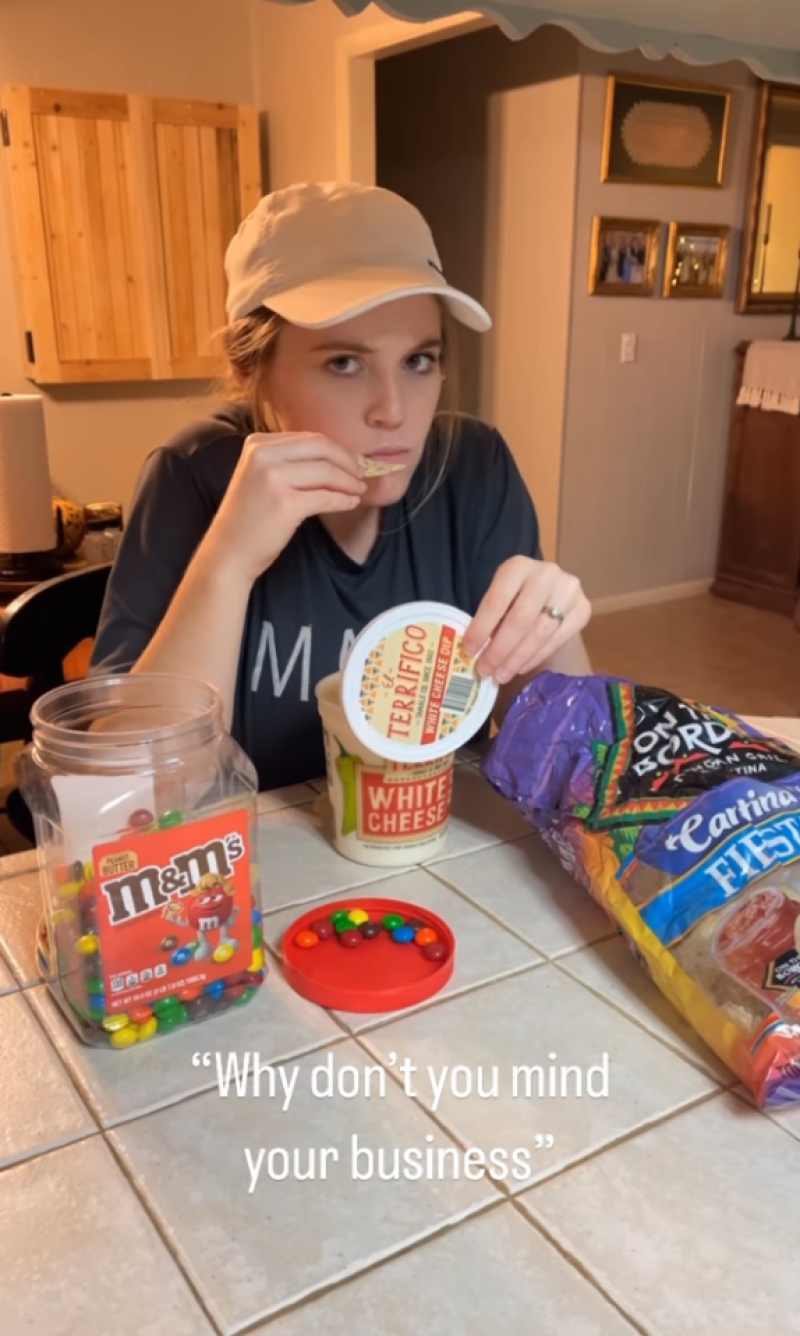 JOY-ANNA Duggar has been accused of faking eating chips in a video she posted about her pregnancy cravings.

The Counting On alum, 25, tucked into a huge spread of snacks in a new clip on Instagram on Thursday.

InstagramFans noticed that there was no dip on her chip[/caption]

Joy-Anna was seen sitting at her kitchen table with a huge bag of chips, a tub of white cheese dip and a giant tub of M&Ms in front of her.

The reality star – who is 12 weeks pregnant with her third child – wore an oversized gray T-shirt and cap in the clip.

She was seen swirling a chip in the dip while text in the video read: “This pregnant mom at 10pm.”

The video was set to someone saying: “If I don’t have a snack soon I might die.”

Another person asked, “Why don’t you wait till breakfast?”

The first person replied, “Why don’t you mind your business,” as Joy-Anna looked up from her snack and gave evils to the camera.

She captioned the video: “This pregnant mama every night after the kids go to bed!”

The TLC alum’s critics couldn’t help but point out that her chip didn’t appear to have any dip on it.

One commented: “That chip had no queso on it lol.”

Another added in a since-deleted comment: “You can literally see her swirling the chip in the air ABOVE the tub.”

Joy-Anna and her husband  Austin Forsyth, 28, announced her pregnancy last month after weeks of dropping clues.

The reality star shared a photo of them kissing while showing off ultrasound photos.

In a second snap, Joy-Anna posed with Austin and their two children, Gideon, four, and Evelyn, two.

The TLC alum captioned the post: “Baby #3 is on the way! Full Video Is On YouTube Now!”

The couple then shared an emotional video of the moment they found out they were expecting.

The clip kicked off with Joy-Anna alone in the bathroom during a trip to Alaska.

“I think I might be pregnant. We’ve been trying and I’m really excited if we are. If we’re not, that’s fine too,” she said to the camera.

The reality star was then joined by Austin in the bathroom, where they discussed their desire to have another child.

Holding the test in her hands, covered in the wrapper, she said: “Ok here’s the pregnancy test. I feel like I should wait to open it. I don’t know why. How do you tell if it’s time?”

She handed it to Austin, who pulled the test out and kept a straight face as he looked at it, before giving it back to her.

Upon seeing the result, she started to sob and hugged Austin.

She added: “Man these tests are good because I’m like four days early and that is incredible.”