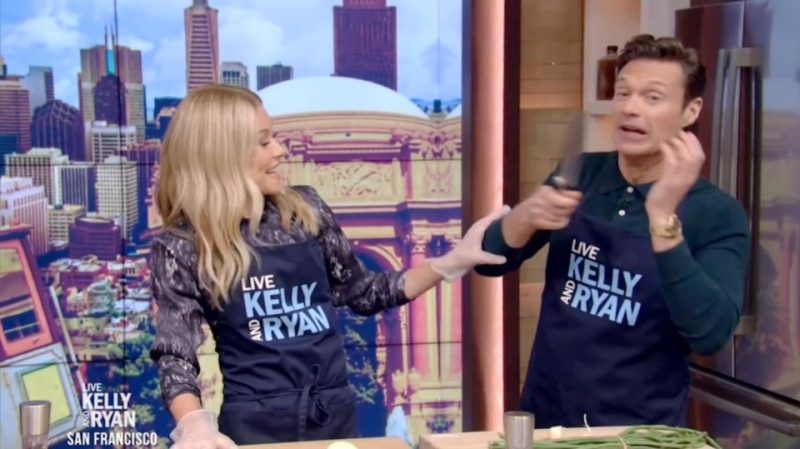 LIVE With Kelly and Ryan host Kelly Ripa shouted at her co-host, Ryan Seacrest this morning after he waved a knife around on set.

Ryan talked and had the knife incredibly close to his face during a cooking segment on the show.

As they came back from a commercial break, the Live hosts stood behind the counter and welcomed Francis to their show.

Ryan was seen holding a sharp knife with the blade up in his hands.

He bounced it on the counter as Kelly smiled at the camera.

After a photo of Alcatraz Prison was shown, he told Kelly: “I took a tour of that with the cassette tape. You walk around with the headphones on-.”

As he put his hands up to his ears to mimic the headphones, Ryan still had the knife in his hand, coming very close to slicing his ear.

“Careful with the knife,” she said, as she touched his arm.

Ryan took his hands off his head and waved it around before saying: “Welcome back!”

Kelly laughed and Ryan moved the knife down to his side.

“Our next guest was brave enough to open-,” she said.

Ryan interrupted her with a “yes” as he pointed the knife at the camera.

“Abaca restaurant during the pandemic,” she finished.

Ryan continued to hold the sharp knife as he cut up the ingredients like an expert.

This is not the first time Kelly yelled at Ryan during a cooking segment.

Last month, the hosts made a special form of pancakes and Ryan sprayed whipped cream all over his co-host.

Kelly warned the American Idol host that she would get her revenge on him.

Ryan took charge and mixed up all of the ingredients.

When he was done, Kelly poured it into the skillet and they put it back in the oven.

The chef went over to one that was already done and told them to start adding their toppings, which was apple butter and whipped cream.

Once they found it, Ryan picked it up, shook it, and sprayed it into Kelly’s mouth.

However, it didn’t come out properly and it got all over mouth.

“He doesn’t know how whipped cream works,” she said as she took the container from Ryan.

Kelly looked at him and said: “I will get my revenge.”

“I’m so patient that I will get my revenge later on. I am a very patient person.”

Ryan joked that it was going to happen on December 22nd and told everyone to tune in.

Aside from starring on Live and hosting American Idol, Ryan also works on radio shows and produces movies and television.

But, he’s apparently looking to add another line to his resume.

Back in August, he revealed he’s hoping to turn his Instagram videos into a major career move.

He posted a video of himself whipping up some tacos and shared in the caption: “What better way to celebrate #TacoTuesday than with @snoopdogg’s ‘Tha Soft Touch Tacos’?

“This was so flavorful and simple to make, that it made me realize I don’t make a basic taco enough. Now, what should I make next?”

In the comments, fans started begging him for not only more social media videos but to also have his own cooking show.

Apparently, he’s already one step ahead of his followers.

One commenter said: “Love this and you, Ryan said it before, you need a foodie show!!”

Ryan admitted he “would love nothing more.”

Then, to another fan who asked about the host getting his own “foodie segment/show,” Ryan teased that everyone should “stay tuned.”

He went on to add a fingers crossed emoji, further teasing that he’s working on something behind the scenes and trying to make having his own cooking show a reality.

However, nearly three months later, no announcement about a cooking show has been made.

ABCAt the beginning of the segment, Ryan had the knife pointed up as he bounced it on the table[/caption]