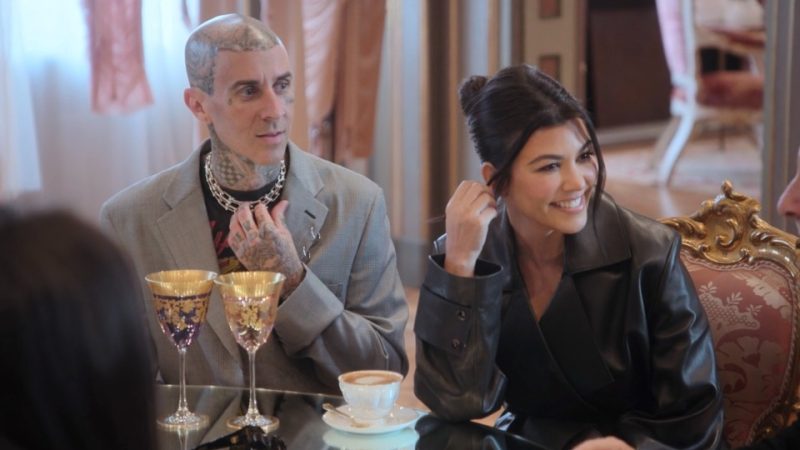 KOURTNEY Kardashian has been labeled a diva by her wedding dress designer in an awkward onscreen moment.

The Keeping Up With the Kardashians star has been accused of “losing her identity” amid her marriage to Travis Barker.

HuluDomenico Dolce called her a ‘diva’ in an awkward moment[/caption]

Now she’s been called a “diva” by Domenico Dolce of Dolce & Gabbana in an awkward scene portrayed in The Kardashians on Hulu.

Kourtney, 43, visited Milan, Italy in Wednesday’s episode to prepare for her wedding to the rocker which took place in May.

The reality star was filmed arriving at Dolce & Gabbana headquarters while on the trip to try on her couture wedding gowns created by the fashion house.

But things got a little awkward during the TV personality’s meeting with Dolce, who she claimed was a longtime friend.

“I have known Domenico Dolce for years now. We’ve vacationed at their home for years in Portofino, he was at my 40th birthday party, and so we’re super excited to be working with him,” she explained in a confessional.

Cameras then switched to Kourtney, Travis, Domenico, and the entire team sitting at a table to discuss wedding plans.

“This has been so amazing,” she gushed, and one of her friends agreed: “If this is the fitting, what is the wedding?”

“Yeah we were like, we should just get married here when we walked in and the piano was playing,” the Poosh founder gushed.

Domenico replied: “I wanna book the guy cause he’s simple, not too much diva, cause I think the diva is here,” pointing at Kourtney and Travis.

The entire room paused before breaking into an awkward fit of laughter.

Kourtney then tried to change the subject as they directed their attention back to wedding plans.

Domenico’s “diva” statement came amid rampant claims that the TV star has changed her personality and identity since marrying Travis.

Earlier this week, she even admitted changing her style to match her newfound husband.

Also on the latest episode of The Kardashians, Kourtney and Travis, 46, attended a fitting for their Met Gala outfits.

The pair attended the star-studded bash just weeks before their Portofino wedding and had decided to wear matching black and white looks on the red carpet.

Thom Browne designed both the Poosh founder’s and the rocker’s outfits.

Travis wore a sharply tailored tuxedo jacket with a skirt, while Kourtney rocked a deconstructed look with a cropped shirt and jacket.

In a confessional, Kourtney explained the logic behind their matching styles.

“Our looks work together, which is how we feel in this stage in our lives,” she said.

As the pair showed off their looks to the fitting team, Kourtney insisted: “We’re not taking solo pics.”

Travis seemed to agree with the sentiment as he added: “It needs to look like the two together. Without it, I would be like, ‘I don’t know.’

However, Kourtney didn’t always dress in her current style.

Before meeting Travis, she was in a long-term relationship with Scott Disick, and throughout most of her adult life opted for colorful and preppy outfits.

Kardashian fans online have shared their opinions on Kourtney’s new look as she embraces her life as Mrs. Barker.

“It’s great she’s happy, but it’s so weird that she’s completely changed her look,” wrote one previously on social media.

Another asked: “Why has she suddenly changed her style? It’s weird. Does she decide what she wears now?”

“Love will make you change your entire identity,” a third suggested.