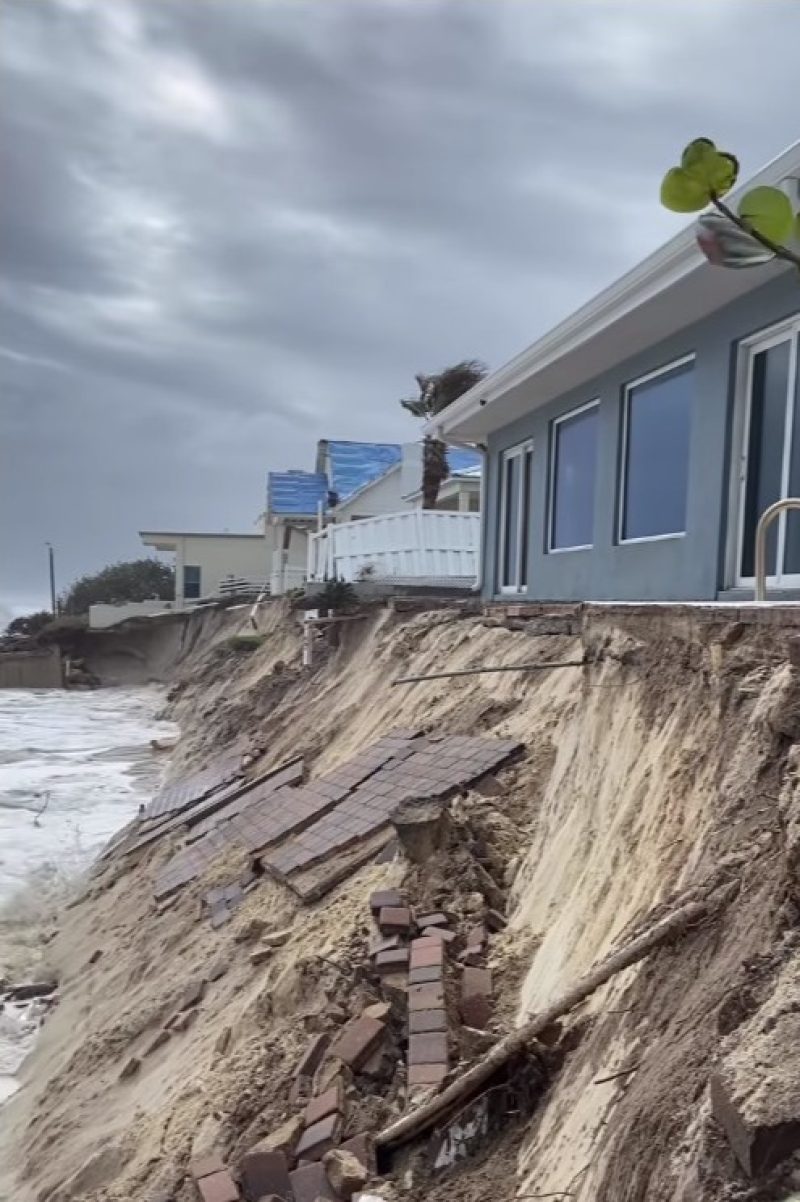 GINGER Zee has been covering Hurricane Nicole from a windy beach in Florida already devastated by crashing waves leading to concern.

The beloved GMA meteorologist is reporting on the rare November storm, the first hurricane in this month in 37 years, that was severe enough to warrant evacuations in Florida – a state still recovering from the destruction brought on by Hurricane Ian.

APFlorida is still recovering from the effects of Hurricane Ian[/caption]

Zee posted a video while reporting from Daytona Beach that sparked concern among fans.

The Instagram post showed the meteorologist standing inside a home close to Daytona Beach that was wrecked by previous storms.

“Can you imagine being in your home and then your sliding glass door used to have 30 feet yesterday, but now?” she said while showing off a steep incline right off the edge of a home on the coast.

“And that’s the erosion AHEAD of Nicole.”

Fans lept to the comments to wish Zee good luck as she continues to brave the impending storm.

Good Morning America coworker Cleopatra Andreadis told Zee to “[be] safe!” to which she responded: “always.”

Someone else commented: “Be careful Ginger!! Thx for all you do!”

Most read in Uncategorized

“Daytona is one of the most beautiful beaches. This is so sad,” another fan wrote.

Residents are bracing for the storm to hit Florida coasts which have only faced a hurricane this late in the season twice since recordkeeping began in 1953.

According to officials, Hurricane Nicole is expected to reach the states Wednesday evening.

Before heading down to Florida to cover the tropical storm-turned-hurricane, chief meteorologist Zee opened up to her fans and supporters, revealing one key thing she won’t do in order to be there for her family.

Zee opened a Q&A session on her Instagram Stories right before heading to the sunshine state.

“How do you[r] boys handle your travel schedule? Loved the Halloween costumes btw,” one follower asked.

“Thank you. It’s getting harder as they get older for sure,” Zee responded, before insisting that her family always comes before her work.

“However, I’ve communicated to them that they are my priority — if they have an event at school or anything they want me at, I won’t miss it no matter what.”

Zee responded with a photo of her son, Adrian, at a recent school performance.

“I cherish every moment,” she said.

The two share two sons together, Adrian and Miles.

Zee has worked as GMA’s chief meteorologist since 2013.

She regularly opens up about her personal and family life on social media, even sharing how she gets ready to appear on television while working in the field.

Last week, Zee claimed on Instagram that she was in an area with “no power” and had to do her makeup “in the dark.”

However, that didn’t prove to be much of an issue as her team had a spray bottle of water and a handheld fan.

“Look at this magic!” Zee said.

The chief meteorologist has also used social media to open up about more difficult topics, like mental health.

On October 11 – World Mental Health Day – Zee revealed she has been living with Borderline Personality Disorder for the past 11 years.

“It’s also important to know that I have found healing and that you deserve to too,” she wrote at the time.

Zee also noted that she has been working through depression, PTSD, and an eating disorder every day.

In her post, the meteorologist said she hopes it will help those facing similar battles.

“I hope this post can help you accept yours. It’s the only way to heal. And you DESERVE to heal,” Zee added.