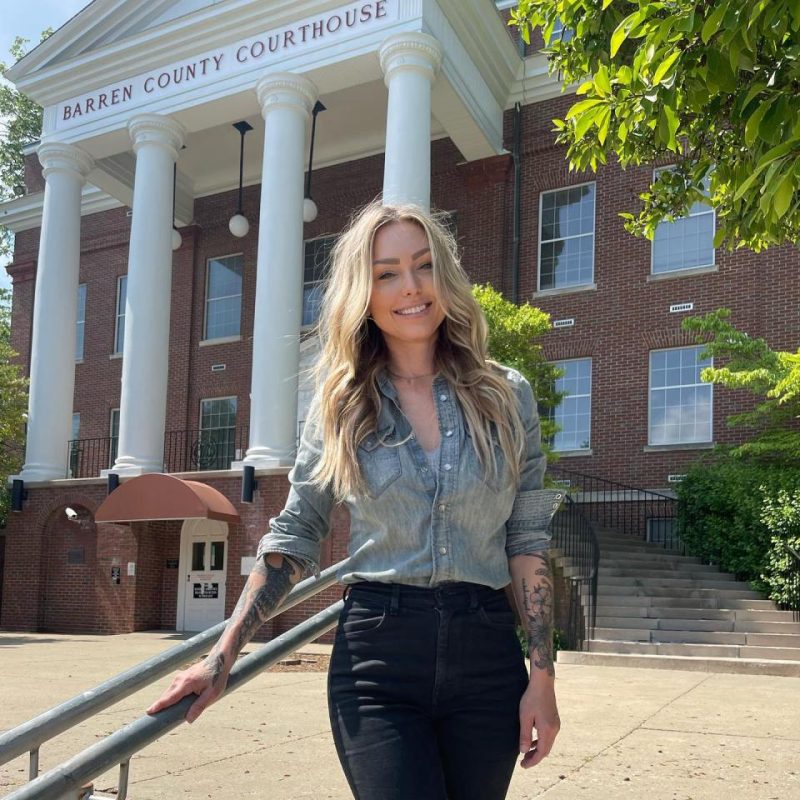 Leticia, 43, announced she was running for Mayor of her “hometown, Cave City, Kentucky in May 2022.

Instagram/@leticiaclineMike Wolfe’s girlfriend Leticia Cline announced her run for Mayor of Cave City, Kentucky in May of this year[/caption]

The Beauty And The Geek alum took to her Instagram Stories to reveal to her followers that she lost the mayoral election while also thanking those who voted in her favor for their support.

The message, which was written over a photo of an airplane ticket to Laguardia Airport, read “I just want to thank the people who believed in me and a vision of what this city could be.”

She continued, “Though it’s not easy to lose, I lost by only 50 votes which says a lot… A woman like me who didn’t have the typical political background.”

The former Playboy model added, “At the end of the day if I inspired someone to do something they never thought they could then I’ve won.”

“That’s all I wanted to do anyway…give the people their voices back.”

Leticia concluded by stating that she or someone like her will “pummel it to the ground,” then wished her hometown the “best of luck.”

Last month, The American Pickers star, Mike Wolfe, 58, joined the campaign for his girlfriend Leticia, when he helped with her run for Cave City Mayor.

The journalist posted a photo of her and her reality star boyfriend to her InstaStory while they canvassed the neighborhood for votes.

She and two other friends wore Cline for Cave City Mayor shirts in the photo.

The former TNA Wrestling interviewer captioned the post: “Today’s canvassing crew! We’re out knocking as many doors as we can. Only 15 days away till election!”

While Mike wasn’t wearing an official shirt, he was holding a campaign flier that read “Vote Cline.”

Mike has said he is “so proud” of Leticia after she shared her ambition to be the “voice” for the citizens of Cave City.

The couple’s romance began shortly after his ex-wife Jodi Faeth filed for divorce in November 2020 after they were married for a decade.

One year later, Mike finalized their split. He shares his daughter Charlie with Jodi.

Meanwhile, Mike has been dealing with a lot of stress from his TV show.

After months of plummeting ratings, American Pickers hasn’t aired a new episode in weeks, and as cast and crew members take on other projects, there are growing clues the show will soon be canceled.

The original premise of American Pickers followed Frank and his former best friend Mike as they traveled across the country looking for rare artifacts and antiques for their shops.

But Frank was fired from the reality series in July 2021 after taking time away to recover from a brutal back surgery that left him with 185 stitches and two rods in his spine.

A year later, the 57-year-old suffered a devastating stroke that he is still recovering from.

Mike’s brother, Robbie, was brought in to replace Frank, but viewers have been vocal in their dislike of the direction of the show, putting its future in doubt.

Robbie Wolfe, 62, helped to shed some light on the show’s production hiatus when he shared a photo of the film crew on his Instagram Wednesday.

The post was captioned, “On the road with the best crew out there, getting new episodes of @americanpickers filmed!”

The photo shows Robbie and four members of the crew forming a chain of human chairs as each member allows another to use their leg for a seat.

Recently, American Pickers fans have asked if the show will ever return with new episodes as the History Channel series has struggled with low ratings.

The official Instagram account for American Pickers shared an image of star Mike Wolfe’s brother Robbie inspecting a boat on the most recent season of the show.

The post’s caption read, “Wow! What a cool pick! Would you ride in that boat? Let us know in the comments below!”

However, many fans saw this as an opportunity to ask if the show would soon be returning for new episodes.

The series hasn’t aired any new episodes since mid-September.

Another asked: “When will we get new episodes?”

The American Pickers account replied: “We’re not sure yet, but you can catch up online while you wait. Thanks for being a fan!”