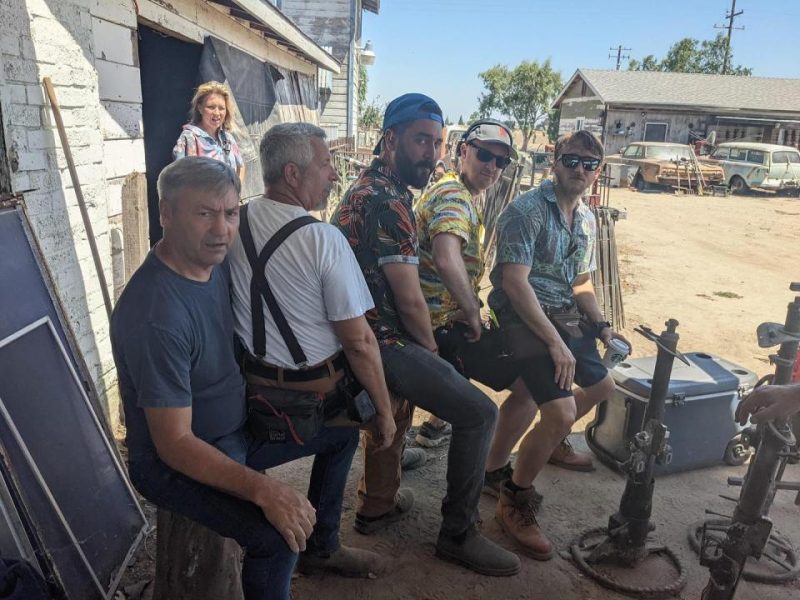 Fans of the series have wondered if, and when, the long-running reality series will return to the air.

Robbie Wolfe, 62, helped to shed some light on the show’s production hiatus when he shared a photo of the film crew on his Instagram Wednesday.

The post was captioned, “On the road with the best crew out there, getting new episodes of @americanpickers filmed!”

The photo shows Robbie and four members of the crew forming a chain of human chairs as each member allows another to use their leg for a seat.

Recently, American Pickers fans have asked if the show will ever return with new episodes as the History Channel series has struggled with low ratings.

The official Instagram account for American Pickers shared an image of star Mike Wolfe’s brother Robbie inspecting a boat on the most recent season of the show.

The post’s caption read, “Wow! What a cool pick! Would you ride in that boat? Let us know in the comments below!”

However, many fans saw this as an opportunity to ask if the show would soon be returning for new episodes.

The series hasn’t aired any new episodes since mid-September.

Another asked: “When will we get new episodes?”

The American Pickers account replied: “We’re not sure yet, but you can catch up online while you wait. Thanks for being a fan!”

But the uncertainty over a new season comes after recent episodes suffered low ratings.

The show, which was racking up as many as 5.3m viewers during its 2010 heyday, achieved ratings as low as 804k for the March 19 episode.

In August, the show experienced a drop in viewership after new episodes moved to 8pm instead of the usual 9pm slot.

Meanwhile, many fans decided to boycott the new series after original star Frank Fritz, 57, was dropped from the show.

However, it’s unlikely that Frank will be returning to American Pickers anytime soon.

The former TV personality is currently under conservatorship after he suffered a stroke in July.

Since September 6, he’s been living at a rehabilitation center.

Frank previously spoke about his feud with co-star Mike Wolfe, 58, claiming in a 2021 interview with The U.S. Sun that they hadn’t spoken for two years.

However, Mike appears to have offered an olive branch in light of his former picking buddy’s stroke, asking fans for their “prayers.”

Meanwhile, Danielle Colby, 46, is currently out of action too after undergoing major surgery.

However, the burlesque performer has assured fans that she is “recovering well.”

Earlier this week, Mike looked unrecognizable in a new photo with his brother Robbie as the co-star brothers spent a night celebrating Mike’s birthday.

Robbie posted the tribute to his brother on his Instagram page.

The brothers have their arms around each other and smile wide, looking relaxed and unshaven.

The reality star host seemed to have recently changed up his look in a new photo.

The History Channel star seemed “very deep in thought” as he posed with glasses on his face in the pic.

The caption stated: “Thinking of what to pick next!”

In the comments section, eagle-eyed fans noticed the reality star seemed different and claimed he had “removed the greys from his old hair” in the image.

One fan said: “Do you mean what hair color to pick next?”

“What did you do to your hair?!” one viewer asked.

A fourth person joked: “He’s wondering what color to dye his hair next,” along with a happy face emoji.

“It sure looks blonde. Could be the lighting?” added another.