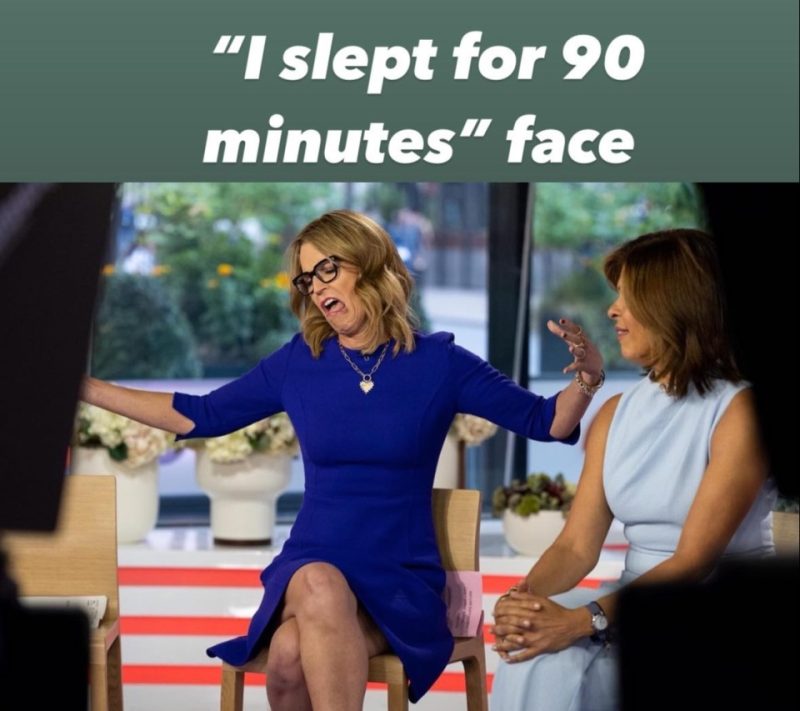 TODAY host Savannah Guthrie has sparked concern after sharing a photo of herself looking rather exhausted on Wednesday.

Savannah, 50, confirmed she had only slept for 90 minutes after hosting overnight coverage of the 2022 midterm elections.

The mom-of-two was dressed in a cobalt blue dress as she joined Hoda Kotb on Today.

In one shot, Savannah looked absolutely spent as she pulled a funny face and threw her arms up in the air as Hoda looked on.

But despite her lack of sleep, Savannah still managed to smile as she talked politics with Hoda as well as Craig Melvin and Chuck Todd.

Savannah captioned her post: “the day after,” and her one million followers quickly commented on the pictures.

“You are an inspiration!” one person wrote, while another said: “All the coffee needed. Great job! “

A third person commented: “The last picture is my favorite. Keep being you!!” while a fourth added: “You are fantastic Savannah!”

Someone else praised Savannah and said: “you worked hard last night! You were great!”

As Wednesday’s edition of Today began, Savannah told viewers tuning in at home: “It is nice to have you with us on this Wednesday morning, the morning after election night!”

Hoda then counted the cups on the desk next to Savannah and said: “One, two, three cups of coffee and one more for you!” as she handed her another cup.

“Long night, but election results still coming in now,” she continued as Savannah informed viewers of the latest updates.

Savannah’s all nighter comes after some people accused her of faking a recent segment on the live morning show.

Fans have been speculating that her beer-chugging with guest Ashton Kutcher last Friday wasn’t real.

During Monday’s episode of the Today show, Savannah brought up the rumors that have been circulating.

The topic came up after host Carson Daly brought up during their pop culture segment that Ashton ran in the NYC Marathon over the weekend.

At the end, The Voice personality joked: “We think that is highly attributed to the beer chugging he did with Savannah.”

After showing a clip of the duo downing their drinks from Friday’s show, Savannah told everyone: “It was a real beer!”

She added: “Some people are like, ‘That wasn’t beer.’ It was beer.”

Hoda had her back and insisted: “It was real beer!”

Dylan Dreyer jumped in to add: “Carson’s not bringing out fake beer,” to which he chimed in to confirm, “It was real.”

Savannah admitted to drinking numerous cups of coffee throughout the nightInstagram/ savannahguthrieNot known, clear with picture deskSavannah and Hoda were joined by Chuck Todd and Craig Melvin as they followed the latest updates[/caption]