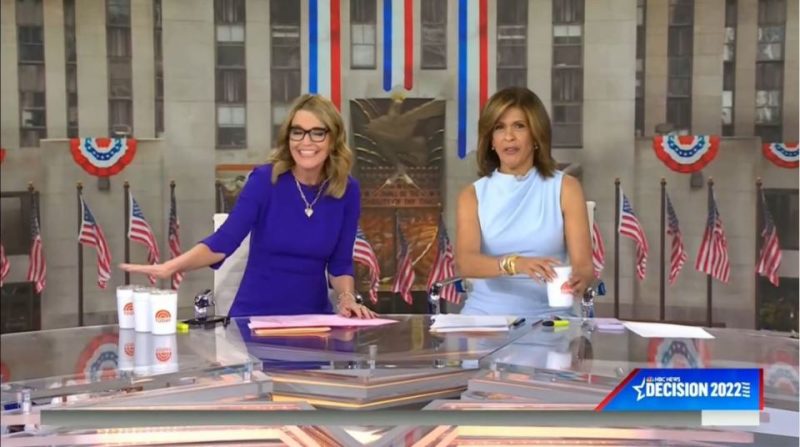 THE TODAY Show host Savannah Guthrie has confused her fans after she posted about her morning ritual.

She stayed up late to cover the midterm elections and had three mugs of coffee to keep her going.

Instagram/savannahguthrieShe shared that her morning ritual was having coffee, but it was three mugs full on Wednesday[/caption]

On Wednesday morning, Savannah posted a photo of three coffee mugs to her Instagram story.

“One mug is NOT enough,” she captioned the picture.

She then went on to reveal that she only slept for 90 minutes, due to election coverage, and therefore, needed more coffee.

The TODAY Show host talked about her morning ritual with her co-host, Hoda Kotb, on Wednesday’s broadcast.

The women gave their normal opening greeting and then Hoda chuckled as she offered Savannah her mug of coffee, along with the three that were already there.

“It is nice to have you with us on a Wednesday morning. The morning after election night,” Savannah said and then looked at Hoda.

“One, two, three cups of coffee. And one more for you,” Hoda said, as she slid hers over.

“You had a long night, but election results are still coming in right now.”

The women usually have one or two mugs sitting on their desk during the broadcast.

When Craig Melvin, who has been off for most of this week, joined the women at the desk, he talked about the coffee as well.

“And now this morning-.”

“We’re waking up together too!” Savannah interjected.

“Fresh as a daisy,” Craig joked.

Hoda then pointed out: “But she only has one, two, three cups… and I’m donating mine.”

Craig erupted into a fit of laughter as Savannah said one of the mugs was “jet-fueled.”

This isn’t the first time Savannah has posted about being exhausted.

Back in August, the host took a week-long break from the show as she spent the last days of Summer with her family.

Savannah posted the snapshots on her Instagram story, where her children, Valerie Guthrie Feldman and Charles Max Feldman, could be seen enjoying the waterpark.

She also shared a picture of the kids laid out and tired from the sun.