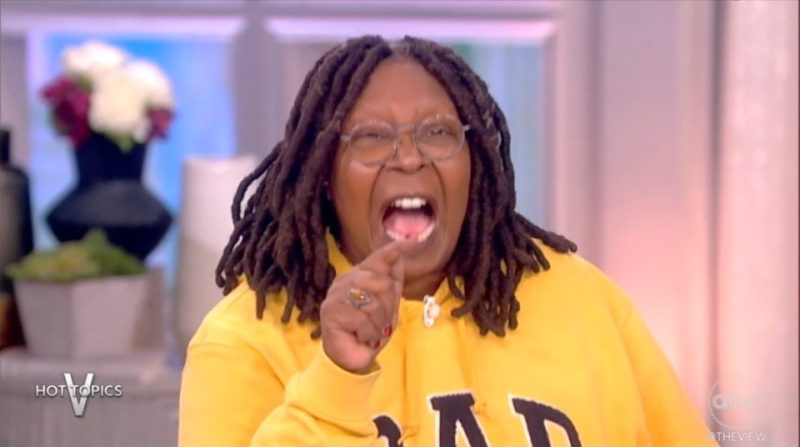 THE VIEW host Whoopi Goldberg has snapped at her co-host, Sunny Hostin, during a shocking live show moment.

While discussing politics, the host shouted at Sunny as she went on a rant.

ABCWhoopi Goldberg snapped at her co-host, Sunny Hostin, during a heated discussion on live TV[/caption]

ABCSunny Hostin got her point across, but Whoopi still interrupted her towards the end[/caption]

On Wednesday’s show, Whoopi talked about the Republicans possibly taking control of the house.

She asked if they would be able to work alongside the Democrats and then turned to her co-hosts to discuss.

As the co-hosts discussed possible candidates for the next Presidential election, Whoopi went into a heated rant.

“This election proves that the people are saying to all the Republicans out there, ‘Do your job. Do your job!” she yelled.

While the 66-year-old wrapped up her point, Sunny spoke up and said: “Can I say one more thing about Biden?”

Whoopi pointed to her and snapped: “YES!”

“Thank you,” Sunny said quietly before she continued to speak.

Whoopi then went on to interrupt Sunny to get her point across.

Even during her outro to commercial break, Whoopi was fired up.

Whoopi’s co-host shouldn’t have been shocked by her outburst though, as she tends to go on heated rants a lot on The View.

Earlier this week, she told the panel a story about a man who posted on Reddit about being rejected at work.

“This is something I like to call ‘the boo hoo of it all’,” Whoopi began.

“A woman tried to let a coworker down easy after he asked her out several times, took to Reddit after she finally told him she was just not attracted to him.”

With a sarcastic tone, she continued: “He took it really hard, told their manager to reassign him so he didn’t have to see her anymore, and said that she should have lied to him, rather than say she didn’t find him attractive.

“Now she said, ‘no I don’t want to go out with you’ twice, probably would have smiled coz she seems like a nice woman, now you pushed her and she told you the truth and you mad!”

Sounding irate, Whoopi added: “So if you can’t take a hint, what is she supposed to do? I pose that question to y’all!”

Sunny replied: “I think a little white lie, in this case, would be okay.

“I think there’s a few things you could say. You could say ‘I just don’t feel chemistry’, that has worked for me, but you’re not talking about looks.

And then you could say, ‘I’ve always been taught that dating at work is professional suicide. So thank you so much but I can’t do it’,” Sunny continued.

But Whoopi was having none of it and fired back: “Why does no not work?”

Staying calm, Sunny then said: “See how nice that sounded? It sounded nice.”

Ana Navarro then got involved in the debate and asked: “What I wanna know is, why isn’t this sexual harassment and toxic workplace?”

She then fumed: “We say it all the time, no is no. you should not make it worse. If she or he says no, just find somebody else, but to move and be all dramatic, grow up!”

Also this week, Whoopi called out Sunny again as she checked her phone during a discussion.

On Tuesday’s episode of The View, Whoopi and her panelists got into a heated debate about the midterm elections.

During the intense discussion, she was in the middle of making a serious point, before she suddenly stopped.

“Girl, put that phone down!” she yelled, as the camera showed Sunny, 54, lifting her phone up off the desk.

“God bless you!” added Whoopi, while the lawyer looked guilty.

“It’s my son,” she explained, while the audience and Alyssa, 33, laughed.

However, this is the second time this week that a host has been caught with their phone during the show.

On Monday, Sara Haines, 45, interrupted the program as her phone pinged during an interview with former co-host Nicolle Wallace.

“Oooops, you had a call,” said the guest as she laughed awkwardly.

The rest of the panel laughed as they made light of the situation.

ABCThe View panel discussed the Midterm Elections, but no one got as fired up as Whoopi[/caption]

ABCEarlier this week, Sunny’s phone chimed during a discussion and Whoopi snapped at her[/caption]