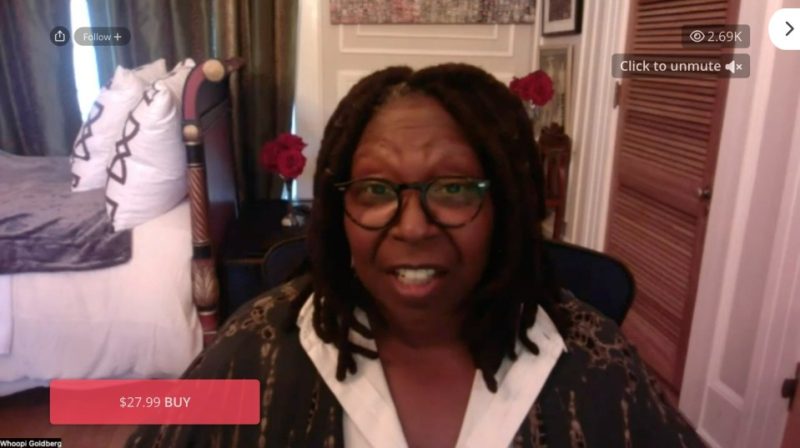 WHOOPI Goldberg has claimed that older people are having more sex than anybody in an NSFW interview about her new book.

The View star has shocked fans with her risqué commentary in recent months.

Now Whoopi, 66, has seemingly come clean about her sex life during an interview with TalkShopLive.

The actress spoke about her brand new book Two Old Broads which she co-wrote with author M.E. Hecht.

The story is a comedic look at aging and “growing older with no apologies.”

In her chat with the online talk show, Whoopi explained: “The beauty of this book is that it’s for anyone who is tired of people telling them what they should be.

She continued: “You should be proud of how old you are. Think of all the people who didn’t make it to where you got to.

“It’s a book of celebration, go out and do stuff. You know, have sex! Nobody wants to talk about older people having sex but old people have sex all the time!

Whoopi’s shocking sex confession followed her dropping another NSFW comment during a recent discussion on The View.

The comedian called out one of her least favorite aspects of pornographic videos.

During a late October episode, the hosts had Sigourney Weaver and Elizabeth Banks as guests to discuss their new movie, Call Jane.

Along with chatting about the film, the hosts and the actresses also found themselves discussing a wide range of topics, as well as going off on tangents.

One such conversation led to the topic of pornographic films and their place in society.

They were discussing sex and tearing down stigmas, with Elizabeth saying: “We need to teach young people.

“Give them as much information as possible, so that they’re empowered to make positive decisions about their relationships going forward.”

Getting heated on the topic, the moderator shocked viewers as she continued: “That’s not how it really goes! Nobody can take that much pounding!”

The audience clapped and laughed in response, as did most everyone sitting with Whoopi at the hosting panel.

Fans at home took to social media to share their surprise, with one just writing: “Whoopi!,” along with crying-laughing emojis.

Whoopi has been married three times and shares her daughter Alex, 49, with her ex Alvin Martin.

Earlier last month, the TV personality left fans disgusted after admitting to still sharing an NSFW habit with her daughter.

She claimed that despite her only child’s mature age, they still “talk about poop.”

In an October episode, John Stamos was the guest and he talked about being a parent.

He has one son, a four-year-old named Billy.

“In regard to this role (Big Shot) you’re playing, I know you said it was easier to play a doctor, but this role is not improving your basketball skills, but you did say it was making you a better father,” host Sara Haines said.

John said that everything makes him more emotional now and he had gone through a lot more experiences and life since having his son.

Sara asked him if it was what he thought it would be as a dad and he told a funny story to the hosts.

“It’s beautiful and so much better. He says poop a lot for some reason,” the actor admitted, to which the hosts laughed.

Whoopi smiled and said: “That’s my kind of guy.”

John told a story about his son where he said told him he loved him and his son replied: “I love you poopy.”

But fans were disgusted by the confession.