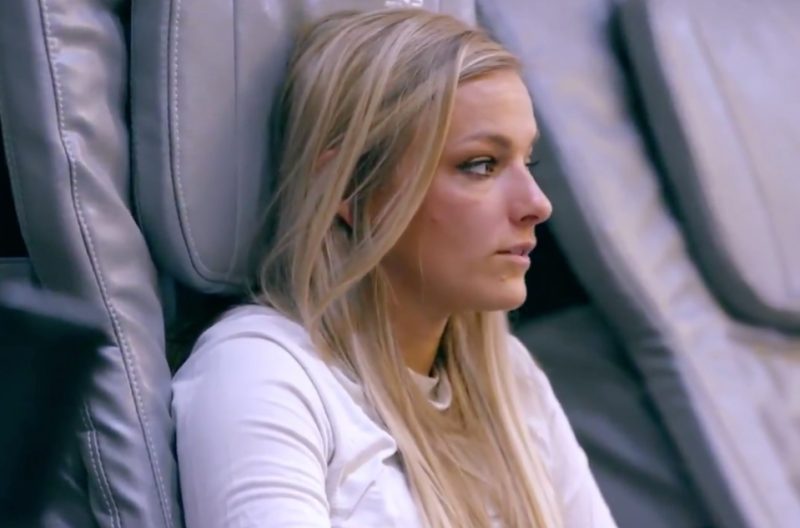 TEEN Mom Mackenzie McKee’s ex-husband Josh has revealed his new girlfriend in the first photos of the couple together.

Instagram/ halienlowJosh’s girlfriend, Halie, posted a photo of herself and the Teen Mom OG alum enjoying a date night[/caption]

Halie, posted a pair of photos of herself with Josh, 29, on her Instagram Monday.

The photos showed the ball cap and hoodie-wearing 29-year-old cuddled against his dolled-up girlfriend as they enjoyed a night out.

Teen Mom fans reposted the photo of the new couple on a popular Instagram fan page.

The post explained, “#JoshMcKee new girlfriend, Halie. Josh and Halie have a total of 5 kids collectively when the whole crew gets together because she has 2 beautiful daughters of her own.”

Fans weighed in on the new romance in the comment section, with one person writing “He has a type.”

While a fourth person stated, “color me surprised he’s already moved on.”

Josh wasted no time in showing that he was back on market, as he ditched his wedding ring and flaunted his abs in a shirtless selfie soon after his split from ex-wife Mackenzie McKee, 28.

Josh took to Instagram to flex his muscles in a shirtless mirror selfie.

He captioned his post: “The pain is worth the growth!”

Along with the shirtless photo, fans noticed Josh was not wearing his wedding band.

One fan commented, “Oooo, no wedding ring?” while another said, “So handsome.”

Back in September, Mackenzie hard-launched her new boyfriend only two months after splitting with Josh.

The ex-MTV star sparked new romance rumors after giving a mystery man a hair makeover in a TikTok video.

Mackenzie resurfaced with the same guy, a man named Dimitri, in a second video.

The reality star’s new beau took to his own platform to share an update after Hurricane Ian passed through Sarasota, Florida.

He stood in Mackenzie’s kitchen and danced to a country song as she cleaned the dishes.

Halfway through, the TV personality turned around to face the camera, giving fans a soft smile before grinding on Dimitri.

The TV personality’s new love interest smiled brightly at the camera before it cut out.

He captioned his post: “We survived Ian,” with the cowboy emoji.

Mackenzie has quickly moved on from her ex-husband Josh despite their split only two months ago.

The mother of three previously raised new relationship speculation after sharing a flirtatious video with Dimitri.

During an Instagram Live session, the MTV star appeared to be braiding the hair of her new man.

She told the camera: “We had fun. We’ll show them how we danced.”

Dimitri said: “I’ll show you guys how I picked her up at the club while dancing to real booty-shaking music.”

MacKenzie stuck out her tongue as she shook her hips at the camera.

She claimed to have gone to another club with her male friend, who waited outside for her.

He said: “I let her do her thing,” as Mackenzie replied, “I was twerking!”

Last month, Mackenzie responded to fan rumors that she hooked up with Dimitri.

The former MTV star tweeted: “When the guy who likes you posts a 10-second clip on the Tok that went viral and now he’s TikTok famous, and everyone thinks you’re a couple when you are indeed SINGLE!”

On an online thread, however, fans were quick to hop on the comments section to mock Mackenzie’s response to rumors she’s in a relationship.

One person said: “I came here to say this. ‘The guy who likes you.’ Like we’re in middle school giggling about who likes who.”

Another fan mentioned: “Damn! You way friend-zoned his a**.”

“She’s got a special way of making things awkward,” one user claimed.

A fourth person chimed in: “There was no reason for her to add ‘the guy who likes me.’”