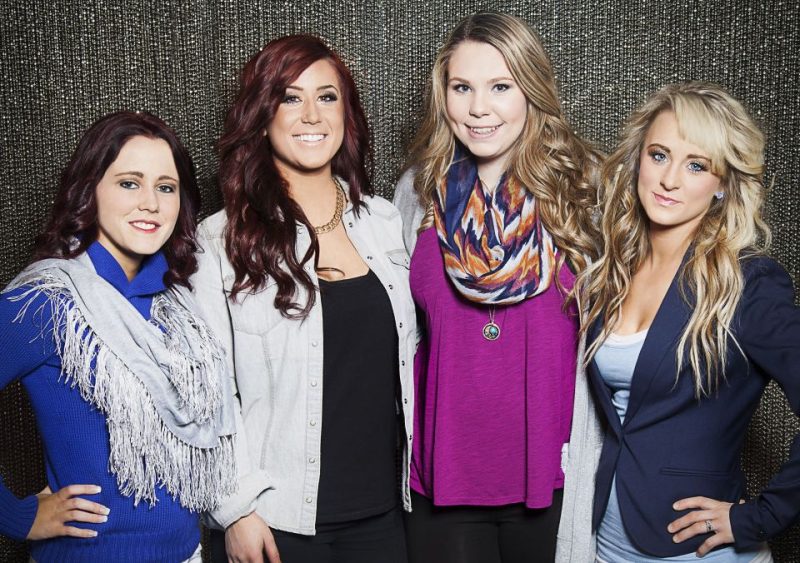 A FORMER Teen Mom cast member has appeared in the franchise’s spinoff series, shocking fans with her return.

Viewers got a special surprise during Tuesday night’s episode of Girls’ Night In when a familiar face arrived.

At the beginning of the episode, Teen Mom 2 stars Jade Cline, Briana DeJesus, and her sister, Brittany, were seen settling on the couch together.

The girls donned matching baby pink silk pajamas as they cozied under a blanket in front of the TV.

In an unexpected moment, their ex-co-star, Jenelle Evans, walked into the room sporting the same sleepwear and joined the ladies on the couch.

The 30-year-old chatted with the ladies, at one point commenting that she nearly didn’t show up to filming.

Jenelle stayed throughout the episode, adding commentary on what she thought about the show.

Earlier Tuesday night, Briana teased her ex-co-star’s return by sharing a snap of the four girls on her Instagram Stories.

She tagged her gal pals, including Jenelle, to promote her comeback.

On Wednesday, Jenelle posted another photo from the evening, calling the experience “so refreshing.”

Her caption read: “Now I don’t have to hide this pic anymore Hanging with girls that get along was so refreshing. This time filming was actually fun and I can say safely you guys can go check out last night’s episode of @TeenMom : Girls Night In on @MTV because I approve.”

Briana and Brittany’s mother, Roxanne, commented with a slew of red heart emojis, while many other fans voiced their excitement for seeing Jenelle on-screen again.

“Just watched this. Was awesome seeing you on there. You looked happy with the girls,” one person remarked.

“Hope you are coming back to tv!! We want to see the next chapter!” begged another.

“I loved you guys hanging out,” one more said.

MTV hinted that Jenelle would appear in the spinoff series after releasing a teaser last month.

Also in the preview was Jenelle’s mother, Barbara, who will appear in a later episode.

Jenelle was fired from MTV in 2019, but fans think that the teaser is a clue that she and her husband, David Eason, 34, may be coming back to the show next season.

Fans on a popular online thread titled, “Do we think this is a sign of Jenelle coming back?” sounded off on the possibility.

One wrote: “As much as I would love to have cameras in Jenelle’s house so we can see what’s really going on. The thought of funding her abuse and neglect is not something I’m happy with.

“Babs can come back anytime tho.”

Another wrote: “I love Babs. I really hope Jenelle isn’t coming back. They’d have to be pretty desperate to bring her back.”

“I wish they would bring back only Barb just purely to piss off Jenelle and David,” said another.

“If MTV brings her back, it means they’re absolutely desperate to keep this dying franchise alive,” scathed another.

One supported the idea, writing: “I’m sorry, but I have and will always love Barbara Evans. I’m cool with Jenelle coming back too.”

Jenelle returned to the show briefly in a recent episode that caused backlash from fans.

In the episode, the mom of three joined Briana, 28, and Jade, 25, for a post-lawsuit party, celebrating the former’s court victory against their ex-co-star, Kailyn Lowry, 30.

As soon as Jenelle arrived at the party, hosted at an AirBnB in Orlando, Twitter erupted with reactions.

While some were thrilled to see the controversial TV star back on screen, many thought the drama was too deep to overlook.

“MTV is f**ked up for having a racist and homophobe back,” one outraged critic commented.

Others were focused on what appeared to be potential drama between Jenelle and Jade.

“So Jade was worried about Jenelle but is gonna do her hair?” one viewer tweeted.

Someone else simply focused on a silly comment from Jade, who made it clear she didn’t want any drama: “‘I got a straightener.’”