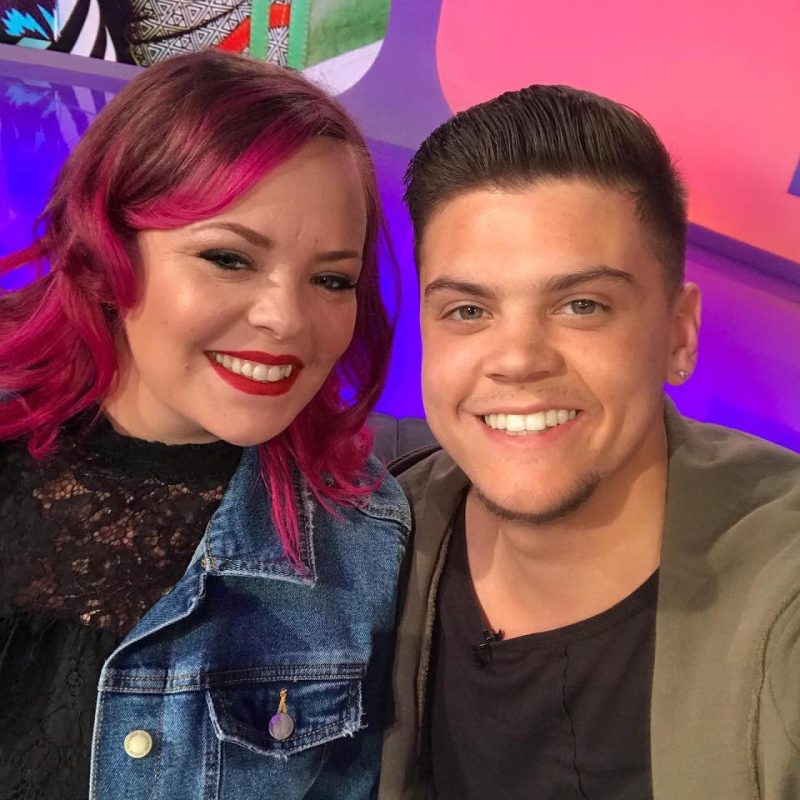 Tyler, 30, shared the adorable clip on Wednesday on his Instagram Stories.

The MTV dad recorded his youngest child standing in the living room of the family’s $220K Michigan home.

The 14-month-old was sporting pink and white animal print pajamas, leaning against the couch as she struggled to keep her eyes open.

The little one appeared to be focused on the TV screen behind her father while she tried to refrain from dozing off.

Tyler teased the tot’s behavior in his caption: “someone is teepy [sic],” with numerous emojis.

Last month Catelynn, 30, shared a sweet video of Rya standing on her own while rocking a cute patterned onesie.

The Teen Mom OG star could be heard off-camera squealing, “What are you doing? What?” as her child balanced on her legs.

The mom-of-four added in a high-pitched voice: “Oh my! Hi!”

Rya smiled at her mom and hesitantly replied: “Hi!”

Catelynn captioned the video: “Look at her my baby.”

Rya is Catelynn and Tyler’s fourth biological child together.

They are also parents to daughters, Novalee, seven, Vaeda, three, and Carly, 12, who they placed for adoption when she was born.

On a recent episode of Teen Mom: The Next Chapter, fans were heartbroken after Nova questioned her parent’s decision to place her sister for adoption.

In the scene, Nova admitted she was “sad about missing Carly,” which prompted her mother to ask, “What makes you sad about it?”

Nova answered, “I felt like that’s my sister, and I can’t see her that much.”

Their daughter continued, “Like, imagine getting split up from your sister or your brother.”

The Teen Mom stars agreed that getting split up “would be sad.”

All the talk about Carly triggered Nova to ask her mother, “How old were you guys when you were pregnant.”

As fans of the long-running series are well aware, Catelynn replied that she “was sixteen.”

A shocked Nova stated: “That is not a grown-up,” before explaining, “You should be like forty or something.”

Laughing to himself, Tyler agreed: “Forty is a great age. That’s perfect.”

Still curious, Nova questioned: “Why were you thinking about having a baby that early?”

Catelynn responds: “We weren’t thinking,” with Tyler adding, “We made bad choices.”

The TV personality then proceeded to list all the reasons why she and Tyler weren’t prepared to have a child.

Nova then stated: “You should have asked God for a baby later,” which forced Tyler to awkwardly tip-toe around how babies are made, a conversation the 30-year-old didn’t appear ready to have.

Catelynn and Tyler have been open about not wanting more children since their youngest daughter was born.

In May, Catelynn shared a funny TikTok video of her husband, alluding that he underwent a vasectomy.

InstagramThe couple are also biological parents to daughters, Novalee, Vaeda, and Carly, who they placed for adoption when she was born[/caption]

InstagramThe pair explained their decision to place Carly for adoption to Nova in a recent episode of Teen Mom: The Next Chapter[/caption]