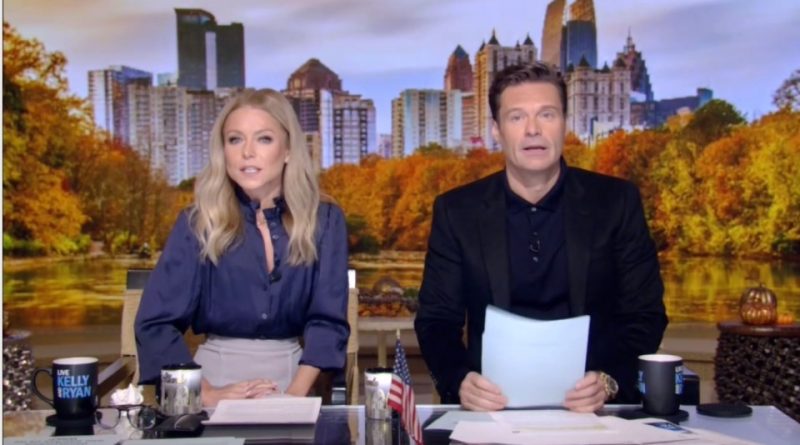 A graphic froze on TV during the trivia segment, making everyone laugh.

ABCThe graphic for the prize, a Live holiday mug, got frozen on the screen[/caption]

On Monday’s show, Kelly and her co-host, Ryan Seacrest tried their best at Great Days trivia.

They welcomed Liana Lang from White Haven, PA, who called into the show.

Ryan told Liana that if she stumped them and they got the answer wrong she would win the “sought-after” Live holiday mug.

But as the graphic came up on the screen, it froze and only showed the side of the mug.

It then turned into a double exposure with the hosts frozen behind it before going back to normal.

“It was so hot, our graphic froze,” Kelly joked.

She raised her eyebrows to the camera as Ryan read off the statements.

Another awkward moment happened during the trivia segment back in September.

Kelly suffered a wardrobe malfunction during the show after her microphone fell off of her.

After they introduced their segment, Ryan asked if anyone could hear his co-host.

He laughed and asked a crew member: “I don’t know. Did they hear anything?”

“We just realized her mic had fallen,” Ryan told the crowd.

Ryan laughed again and then moved on. “Anyway.”

She then asked if the music could be shut off and said: “Don’t worry about my sound. Worry about the other sound.”

Kelly isn’t the only one who calls people out during the show.

Guest Sara Gilbert called out Ryan for being a “fake vegan.”

Kelly and Ryan welcomed The Talk’s Sara, 47, as she promoted the new season of The Conners.

During a discussion about health and fitness, Ryan, also 47, told his guest: “We have veganism in common!” although he admitted, “You’re probably more strict than I.”

Sara immediately hit back: “Right. Because you’re not a vegan.”

As the audience laughed, Ryan tried to explain: “When I eat plants… I’m a vegan! And when I cheat, I cheat.”

The actress decided to put this to the test, asking the American Idol host: “What’s in your cup?”

“My cup… this is H2O,” he said, innocently, as he leaned over to show Sara the contents.

“So you only drink water, you don’t eat food?” she clapped back, sarcastically.

Ryan then decided to come clean about his diet, as he revealed: “I think the thing for me is, I try and eat a lot of plants but I love everything. But for you, you are strict right?”

Sara explained that she abstains from dairy, although she will occasionally take a “tiny bite” of home baked cookies from her friend.

ABCBack in September, Kelly suffered a wardrobe malfunction when her microphone was not attached to her properly[/caption]