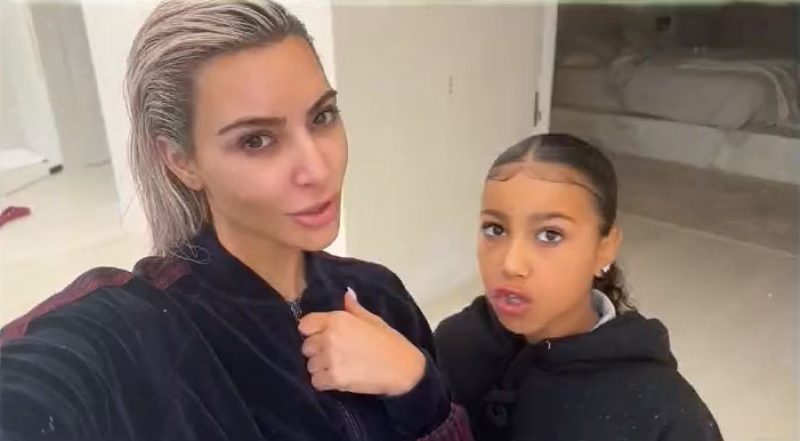 KIM Kardashian has shown off her natural skin texture in a new unedited home video inside her $60M Los Angeles mansion.

The Hulu star shared the screen with her daughter North, nine, for the TikTok video.

Posted on their shared account, the recording shows Kim, 42, and her nine-year-old daughter lipsyncing to audio pulled from Fox’s The Cleveland Show.

The Keeping Up With the Kardashians alum appeared to be fresh out of the shower as her wet hair was still slicked back and drying on her head.

North looked more than prepared for the day as she rocked a middle part and already had her lipgloss applied.

Speaking in time with the show’s dialogue, both Kim and North mouthed “I’m sorry I just need one minute to make sure I look good, do you think I look good Mr. Armstrong?”

The reality star’s SKKN by Kim skincare line seems to be doing its job, as even without makeup the LA native’s skin looked impeccable.

Kim recently shared a clip on her Instagram to promote the line’s skincare products.

In the clip, the TV personality demonstrated the gentle way she applies the products to her face.

She looked directly at the camera with her platinum locks flowing down while donning tan lingerie from her shapewear brand, SKIMS.

The clip was a rare glimpse of the former E! star sans glam as she usually rocked a full makeup face.

Kim was recently shown without makeup but with dark circles under her eyes in an unedited clip from The Kardashians.

Last week’s episode of the Hulu series showed Kim trying on Marilyn Monroe’s $5m dress, which she wore at the Met Gala in May.

The mom-of-four was filmed naked as a room of dress handlers tried to help her into Marilyn’s outfit.

Cameras caught the reality star fresh-faced and with dark under-eye circles as she attempted to make the dress fit.

She looked nervous as she covered her bare breasts with her hand while a worker attempted to lift the fabric over her hips.

Another angle flashed her bare butt as a handler wearing gloves failed to pull the dress over her hips.

Kim looked close to tears as she realized that she was not then slim enough to fit into the historic piece, which was custom-made for Marilyn in 1962.

During a lunch with her sisters Kourtney, 43, and Khloe Kardashian, 38, Kim revealed that Ripley’s Believe It Or Not! museum, which owns the dress, originally shelved plans for her to wear it.

“They just pulled the whole thing from me, and I’m fuming,” she began.

“I had to try the prototype first and see if that fit, and once it fit, they sent the original.

As she expressed her fears over potentially not being able to lose the weight, Kim revealed that she was going to skip the Met Gala altogether if she couldn’t wear Marilyn’s dress.

“I was so prepared to go in my head that it’s gonna make me so sad to not,” she said in the most recent episode of The Kardashians.

“Oh, are you not?” asked Kourtney, who was going to the Gala too, along with Khloe.

“Not if they don’t let me wear the dress, no,” she said sadly.

Kim also revealed that Ripley’s required her to have insurance to wear the garment.

She walked the red carpet of The Met Gala wearing the original gown with her then-boyfriend Pete Davidson before she changed into a replica for the rest of the evening.

In June, she revealed that she had lost a further five pounds.

“I’m not trying to lose any more weight, but I have more energy than ever,” she shared on Today.