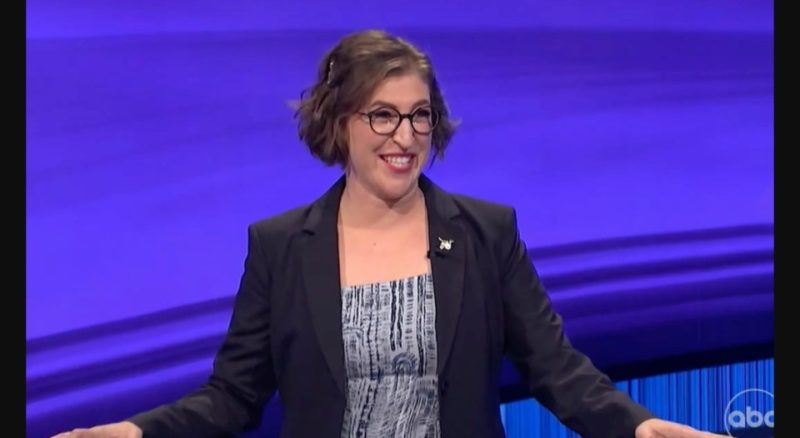 Host Mayim Bialik, viewers at home, nor the contestants were prepared for what ensued.

All three came to play on the weekly spinoff, instead of acting out on stage as per previous episodes, and Joel won with $18.6K.

But it was the treasured Johnny who won over everyone with the “Number 1 hits” category.

The game show enlisted the voice behind “This is Jeopardy!” since 1984 to recite them, and he did, without a beat of hesitation.

The first clue he read went: “Hot night, wind was blowing, where you think you’re going baby? Hey I just met you and this is crazy.”

Joel nervously buzzed in and correctly responded: “What is… Call Me Maybe?” by Carly Rae Jepsen.

The second read: “Why Men Great till they gotta be great? Don’t text it tell me straight to my face.”

None of the three contestants buzzed in, perhaps so taken aback by Johnny’s booming voice reciting Lizzo’s “Truth Hurts” that they were speechless.

Again, no one could even get to the point of buzzing in and Mayim, 46 laughed exclaiming: “Um, What is ‘Savage!?’” by Megan thee Stallion.

Another clue was the lyrics to “One Week” by Barenaked Ladies and in the end, the category went 1/5 as the crowd just lost their cool.

The clip instantly went viral as Jeopardy! didn’t have to make Johnny dish out the hits, but everyone was so glad they did.

One fan tweeted: “I never, and I mean, NEVER thought I’d see the day where I heard Johnny Gilbert reading Megan Thee Stallion”

A third posted: “The way Johnny Gilbert is reciting lyrics is cracking me up.”

A fifth loved it as well: “Johnny Gilbert reciting the lyrics to Lizzo & Megan Thee Stallion is something wonderful I never knew I needed.”

Johnny would have surely made the late Alex Trebek – who passed away two years ago yesterday – proud as he once recited rap lyrics like “Panda” with no backing music, or pause, either.

Johnny – who began on the show with Alex – recently said on-stage at a special Jeopardy! event that his voice is not going anywhere.

“38 years later Jeopardy! is bigger and better than ever,” the 94-year-old declared.

“I’m older than God but I’m still here. For as long as the good lord will let me I’m going to keep introducing your names and other names to millions of people and I will do it with great pride.”

Johnny, who also announces each contestant’s name and has for decades, now records his voiceovers from home and is the only original staffer.

Joel will face Wil Wheaton and John Michael Higgins in the second semi-finals game of Celebrity Jeopardy! – the winner of that will advance to the finals with Ike Bareholtz.

The tournament-based spinoff is worth $1M for the charity of the winner’s choosing.

Over the summer, GOAT contestant Ken Jennings, 48, and actress Mayim were officially announced as the permanent replacements for the late, great Alex.

Celebrity Jeopardy! airs on Sundays at 8 pm ET on the ABC network and each episode is available to stream on Hulu one day after it airs.