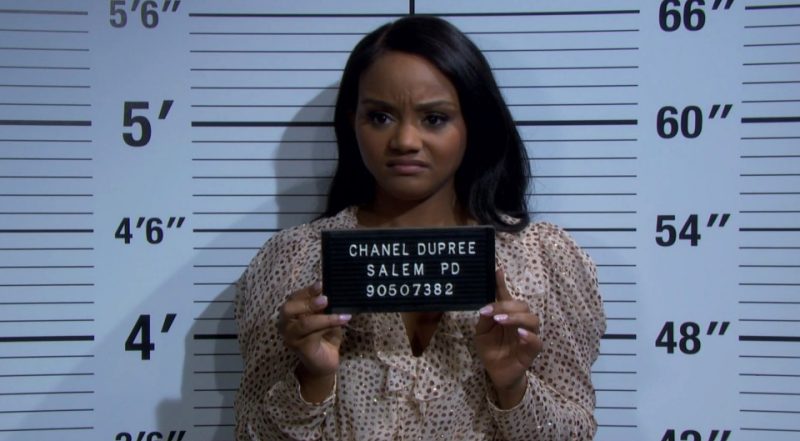 DAYS of Our Lives fans have slammed the show for dragging out Chanel Dupree’s mysterious storyline.

The character, portrayed by Raven Bowens, has been arrested for murder in the latest episode, but viewers are still being left in the dark about the details.

During Wednesday’s new episode, Days of Our Lives fans watched as Chanel was booked on murder charges.

She had a mugshot taken and was interrogated over the crime, though the specifics about the crime were not revealed to those watching at home.

The soap has been teasing Chanel’s secret for weeks, and fans have had enough of being out of the loop.

One angry viewer tweeted: “#days is so annoying! When are we going to find out what Chanel did? Talk about drag-a**ing a story!”

From murder mayhem to doomed romances: Who else is coming & going on DAYS?

Another insisted: “Watching today’s #Days, this better be one heck of a secret, Chanel’s hiding!”

A third sarcastically wrote: “Of course Paulina tells Abe what Chanel did off camera, so the audience still doesn’t know!”

“I hate being left in the dark, so at this point…,” the user continued, along with a gif that read, “You know what, I don’t care!”

The fan then wondered: “So who did Chanel supposedly murder? There has to be more to this than meets the eye, was it an accident, self-defense?

“I need answers, cause my patience is running out!”

Another viewer agreed, writing: “This is the main problem with this SL because they dragged it out, I don’t care what the reason is.”

It’s been about two months since Days of Our Lives made the move from NBC to its streaming platform, Peacock.

While many fans were originally furious about this historic change, some have started to come around to the advantages of the move.

For one, there are fewer commercials distracting from the actual program.

One DOOL fan explained to others: “Days Of Our Lives was 37 minutes on NBC but it was stretched out longer due to commercial ads.

“On Peacock you get one or two ads then back to episode.”

A second shared: “You only get SEVEN minutes of ads on Peacock!

“So unlike with NBC, you don’t even have to sit through 20 minutes of ads to get back to the drama!”

Another positive, fans said, was that the show will no longer be disrupted by breaking news reports, as it sometimes was on NBC during its daytime slot.

“Just watched @DaysPeacock on @peacockTV and it was great,” one viewer tweeted. “No fast forwarding thru commercials or news interruptions!!!”

Another positive for fans was not having to wait until the afternoon to watch it air, or until after work to watch it recorded, as they could instead watch it just as their day begins.

One happy fan admitted: “I love it that the show is up before I go to work. Now I can watch and have a full day to discuss.”

Another shared: “I enjoyed waking up to watch @DaysPeacock #DaysofourLives #DAYS #DOOL on @peacockTV.

“Starting my day off with Days is a good thing.”

A third gushed: “Watching a new #DAYS first thing in the morning feels so right.”

Another said that they made sure to watch “first thing” in the morning because they have no plans on “giving up on Days after watching for 5 decades.”

It was revealed in August that DOOL would be leaving NBC and heading to its streaming platform, Peacock.

The show officially became a Peacock exclusive on September 12.