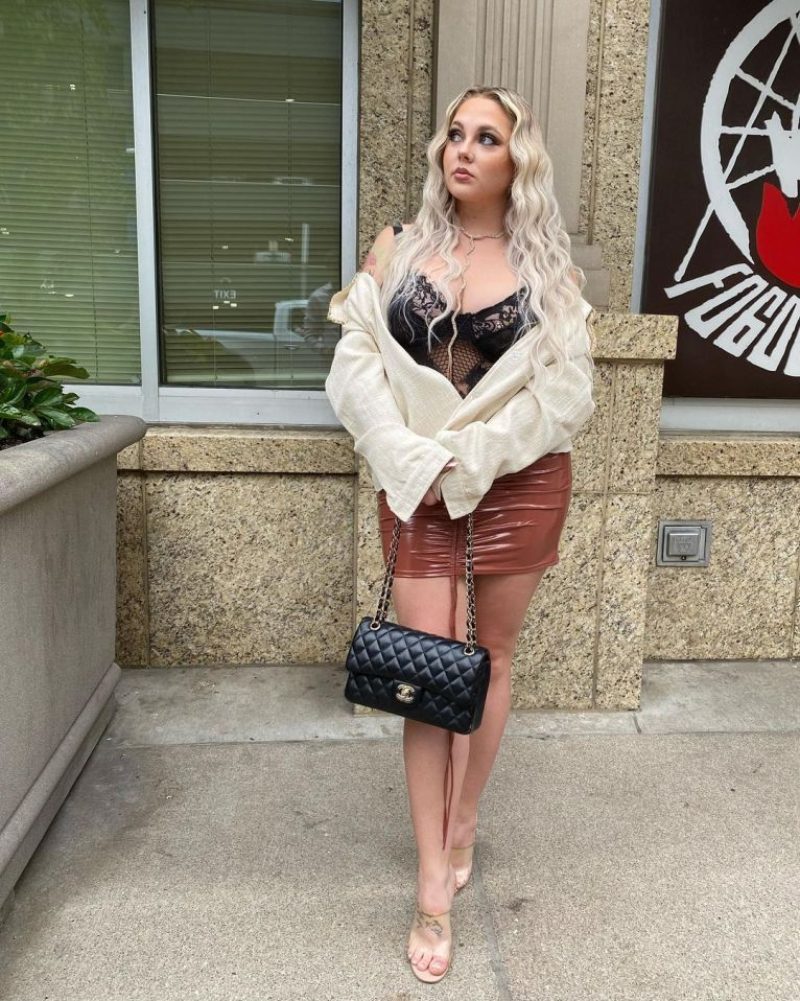 JADE Cline nearly popped out of her top, while posing for an impromptu photo shoot.

The Teen Mom star shared a pair of pics on Instagram, while standing in front of a Brazilian Steakhouse in Indianapolis.

Both snaps were apparently taken by her baby daddy Sean Austin, as Jade added the caption: “Photo creds to my bby ily @sean.luc.austin.”

In the first photo, the 25-year-old clutched her pricey Chanel purse – valued at nearly $9,000, while crossing her legs and staring off into space.

Her tan shirt was open and draped around her shoulders, exposing her black lace bra.

She finished the look with a tight brown, leather-looking miniskirt.

In the second photo, the shirt has dropped lower, and more of the hairstylists breasts are exposed.

Jade continues her off-camera stare, this time twirling her hair as she appears distracted.

The reality star, who just turned 25 last Friday, shares four-year-old daughter Kloie, with her photographer boyfriend Sean, but their relationship has been turbulent at times.

Sean entered rehab in 2021 for drug addiction and for clarity on mental health.

Along with rehab, Jade revealed he received counseling and therapy, which helped him get sober.

In an Instagram Q&A, the Teen Mom stated that she is so proud of Sean and that he’s doing amazing.

“So much has changed in our lives and I’m very happy,” she continued.

During an Instagram Live chat with his followers, the MTV star told fans that rehab showed him he “needed to find” himself.

He explained: “That’s who I need to find at the end of the day was myself and come to terms with things that I haven’t came to terms with and get s**t of my chest that I didn’t know I needed to get off my chest and unbury everything that I’ve had buried for so long.”

After completing rehab, Sean’s relationship with Jade has gotten better as the couple recently enjoyed a trip to Las Vegas.

Jade teased a possible marriage between the two while answering a fan’s question on social media.

A follower asked: “Are you and Sean going to get married?”

The reality star responded: “I mean…we were just in Vegas…who said we didn’t already?”

She added the “Shhh” emoji and an emoji covering its eyes.