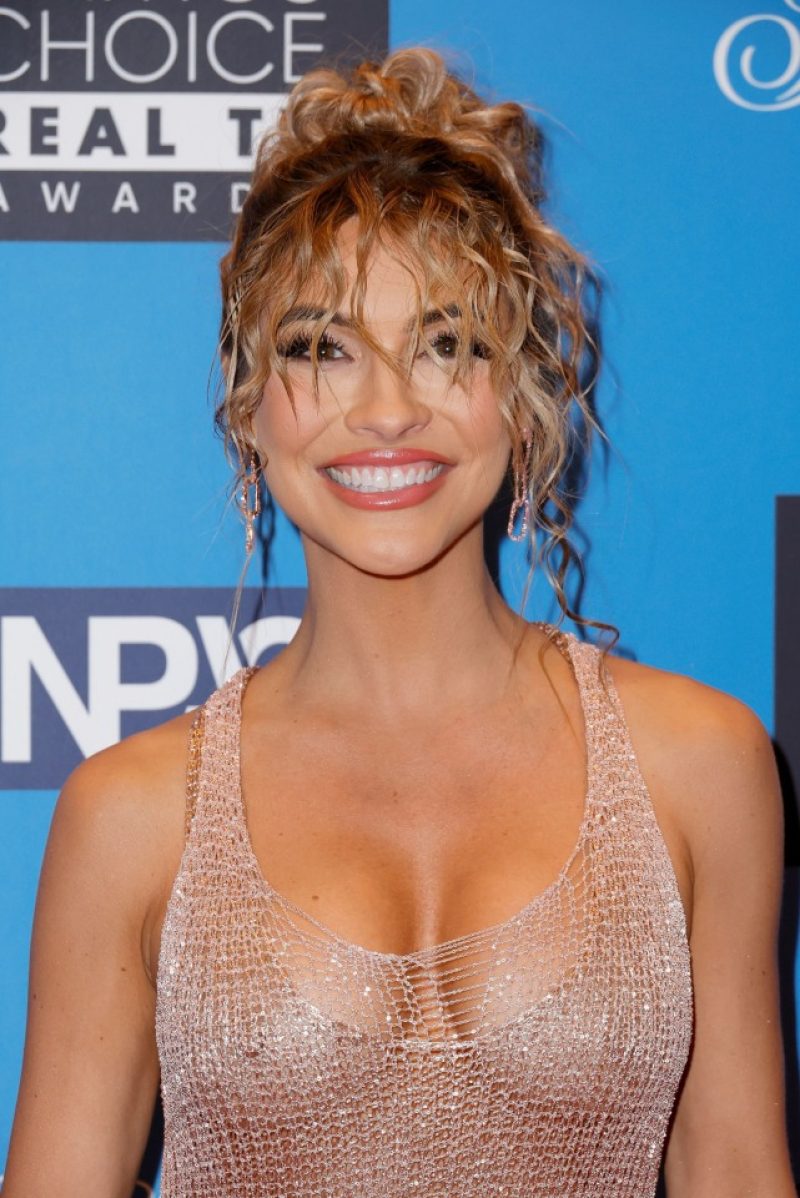 The look appeared to have a second slightly less sheer layer beneath it, though it still left little to the imagination.

Chrishell covered her bottoms with a tiny pair of briefs and accessorized with a clutch she held in one hand.

She was all smiles as she posed, showing off a new hairstyle.

The Netflix star wore her hair up with her fringe curled in front of her face.

Her eyes were barely visible and a long pair of earrings just peaked out from beneath her loose pieces of hair.

The daring new style comes after another major change in Chrishell’s life.

Chrishell revealed the romance during the Selling Sunset reunion.

Confirmation of her new love came amid rife speculation from fans.

The estate agent was pictured holding hands with G Flip after the pair addended a concert together.

While talking about her love life during the Season 5 reunion show, Chrishell revealed: “I recently have been spending a lot of time with someone that’s very important to me.”

She went on: “Their name is G Flip.

“They’re non-binary, so they go by they/them and they are an extremely talented musician.”

Chrishell was joined at the reunion by her ex and costar Jason, 45, who also happens to be her boss at The Oppenheim Group, a high-profile real estate brokerage.

Commenting on her dating experiences, the actress added: “You don’t get to choose where you meet someone.

“You don’t get to choose when you meet someone in their life.”

The confirmation from the Selling Sunset star follows fan speculation about her relationship with G Flip.

The two first met when the artist asked Chrishell to appear in one of her music videos.

Fans on Reddit sparked rumors after a photo surfaced which showed the pair holding hands while at a concert in Denver, Colorado.

Another image posted to Chrishell’s Instagram Stories showed them on what appeared to be a “date night” before the season five premiere of Selling Sunset.

The newly confirmed lovebirds were pictured last night packing on the PDA at a nightclub close to The Oppenheim Group’s office.

The revelation comes after fans watched the demise of the agent’s relationship with broker Jason.

The former couple was first linked in the summer 2021 and dated for five months before calling it quits.

They were divided by a decision on whether to start a family or not, as Chrishell was keen to have a baby.

Opening up post-breakup, she told her Instagram followers: “Jason was and is my best friend, and other than our ideas for a family ultimately not being aligned, the amount of respect and love we have for each other will not change going forward.”

At the reunion, Jason appeared to be happy for his ex, saying that G Flip “seems bada**”.

Prior to her relationship with the Oppenheim Group founder, Chrishell previously dated her Dancing With the Stars partner Keo Motsepe, and was married to actor Justin Hartley before divorcing in January 2021.

The This is Us star is currently married to Sofia Pernas, whom he met while working on The Young and the Restless.