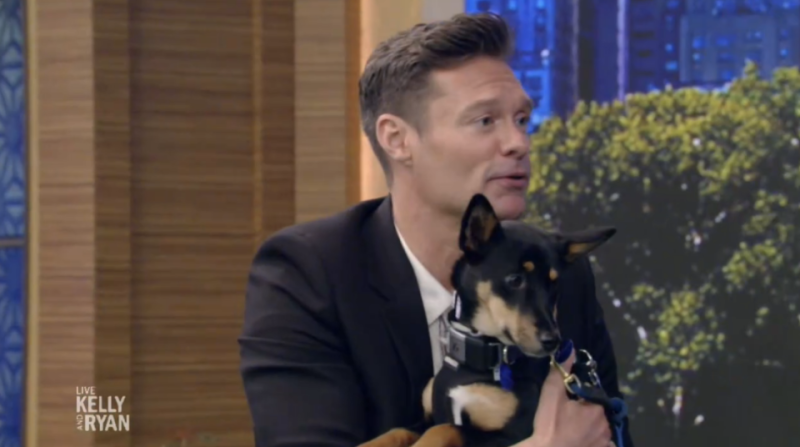 RYAN Seacrest has suffered a major blunder during the live broadcast of his talk show with co-host Kelly Ripa on Monday.

The 47-year-old has had a few mishaps on TV lately, including a wardrobe malfunction during the American Idol finale a few weeks ago.

During Monday’s broadcast of Live with Kelly and Ryan, the hosting duo had some fun on set with a few dogs.

They were joined by training expert Andrea Arden, who was teaching them some tricks.

Unfortunately, Ryan wasn’t able to learn the lessons quickly enough, as he had troubles with the pups.

At one point, he found himself on the ground, trying to get a dog to come back to him.

The expert had to come in and trade dogs with him in order to help out.

That didn’t help for long, though, as this next pup soon ran away from Ryan, as well.

This time, he had to run off set and behind the stage to chase after the animal, before carrying the pup back to front and center a short while later.

Meanwhile, Kelly and Andrea worked to keep the rest of the segment going and on topic.

“I’m trying to stay focused,” the latter said, as she briefly turned her head to watch Ryan running all over the set.

Kelly decided: “This dog is afraid of Ryan!”

She then jokingly asked him: “Ryan, what cologne did you wear today?”

Earlier in the episode, he’d showed off a copy of a photo he’d posted to his Instagram on Sunday.

In the shot, the 47-year-old showed off his bulging muscles in a tiny T-shirt he’d rolled up to reveal his bare arms.

He tended to the grill in the picture, but fans were more focused on his strong triceps.

On Instagram, one lusted after the American Idol host, commenting: “Ryan and the gun show! Hope those are registered.”

Another asked: “Where’s the beach Ryan?”

“Is this really about the food tho,” grilled a third fan, along with a flex emoji.

A fourth similarly wrote, “Aka let me show off my huge arm muscles lmao.”

Now that American Idol has wrapped, the host has seemingly found time to share more of his workout transformation.

“The only good curls I got this morning,” he captioned another Instagram mirror pic at the gym earlier this month.

Ryan sweatily smized for the selfie as Katy Perry commented, “omg is this a thirst trap?”

The new and improved Ryan is an encouraging sign for fans who have been worried about the endlessly busy TV personality.

During American Idol’s expansive three-hour finale on May 22nd – Ryan’s eye was twitching and drooped multiple times during the big broadcast, and fans noticed.

One viewer chimed in, “Am I the only one noticing Ryan Seacrest’s eye again? What’s happening?”

Another asked, “What’s going on with Ryan Seacrest’s eye?? #AmericanIdol”

While Ryan didn’t mention any health issues on his talk show, he did reveal the morning after the Idol finale that he’d had a wardrobe malfunction during the broadcast.

NBCAt one point, he had to chase a dog all throughout the set[/caption]

Instagram / Ryan SeacrestEarlier in the broadcast, Ryan shared a photo of himself grilling, showing off his arm muscles[/caption]