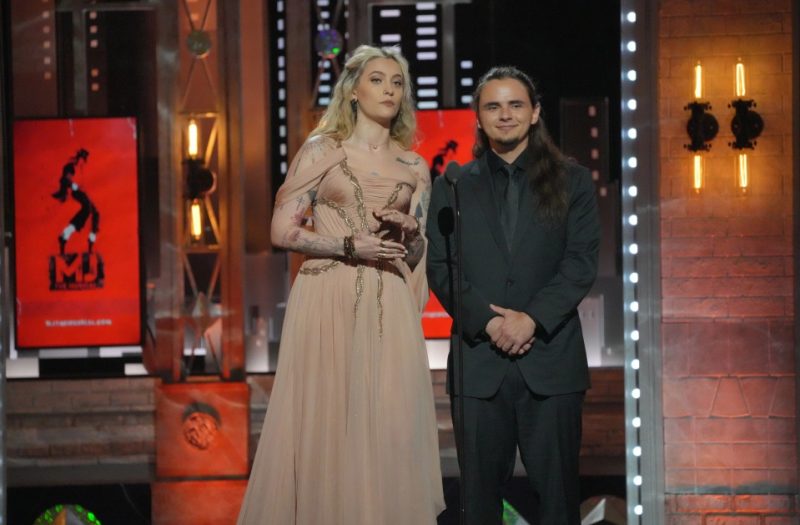 FANS of Michael Jackson can’t get over how grown up his children looked, as Paris and Prince appeared together at the Tony Awards.

MJ’s kids, now 24 and 25 respectively, honored their father by introducing a performance from MJ: The Musical, which was nominated for the top prize.

Walking out together on stage, Prince, in an all-black suit, shirt and tie combo, addressed the cheering crowd.

“A lot of people seem to think our dad Michael Jackson changed popular music forever,” he said. “And who are we to disagree?

“But what people may not know is he loved musicals, on film and on the stage.

“That’s why we are so incredibly honored to introduce the night’s first nominee for best musical, ‘MJ,’ which, using many of his iconic hits, looks at the complexities and brilliance of our father’s process.”

Paris, nervously holding her hands while dressed in a pink sleeveless gown, continued.

“This number showcases that creative process, as he builds a dance routine step by unforgettable step to one of his best love hits.”

“MJ: The Musical” which follows the singer’s life during his “Dangerous” tour, was  nominated for 10 Tony Awards including Best Musical and Actor.

Earlier in the show, it won the Tony award for Best Choreography.

But on Twitter, fans could only focus on the pop superstar’s offspring

“Oh my gosh Prince and Paris Jackson are all grown up?!?” one person tweeted. “I still think of them as little kids.”

Another added: “Michael Jackson’s kids have grown up so much. Paris is beautiful!”

Before the show, Paris and Prince walked the red carpet, showing how tight the brother and sister are together.

Also spotted on the carpet by The Sun were fellow Broadway legends and nominees Phylicia Rashad, Andrew Garfield and Jessica Chastain.

Last month, Paris opened up about her childhood in an interview with PopSugar after she was announced as the new face of KVD Beauty.

Discussing her upbringing in the entertainment world, she revealed that it gave her a complicated relationship with beauty: “It wasn’t until the last couple of years that I’ve started feeling really good about myself and my body.”

“Those moments of self-love aren’t 24/7, but the bad moments are fewer and further between.”

She added that her dad Michael’s philosophy helped her keep an open mind as she embarked on a career as a model.

“I was raised by a free-love, hippie-type dude, so we were taught that beauty comes from the inside — and to this day, I still believe that.”

While Paris is known for her love of piercings and tattoos, many of which have no particular meaning, she has begun to appreciate the power of makeup after years in the fashion industry.

“All of the experiences that I’ve had in the last few years have gotten me to that point,” she said.

“I appreciate the artistry behind it.”

Meanwhile, Prince looked decidedly different from just a few months ago, when he and his girlfriend celebrated their fifth anniversary.

At the time, Prince sported a beard and long hair, and even one visible arm tattoo.

He also has a tattoo of his iconic father on his leg.

By his side for the photos was his long-term girlfriend, Molly Schirmang.

The young romantic used heart emojis as he captioned the pics: “5 years together.

“Lots of trips, miles, smiles, meals, desserts, and all kinds of adventures in between.

Michael passed away in 2009 at the age of 50 following combined drug intoxication.

He left behind three kids, Prince, Paris, and Blanket, 20.

Both Paris and Prince are the children of Michael and his second ex-wife, Debbie Rowe.

Blanket was born in 2002 via an anonymous surrogate mother.

AP:Associated PressParis and Prince stand together during the memorial service for their father in 2009[/caption]