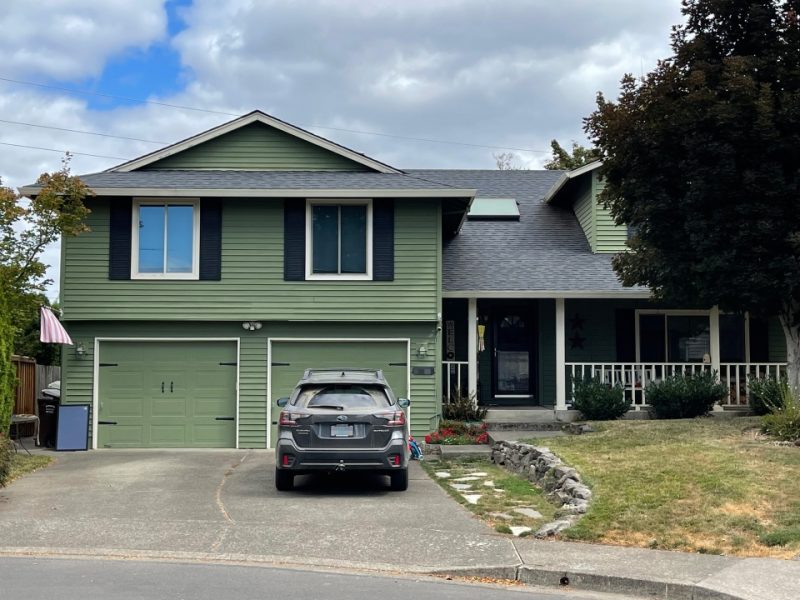 LITTLE People, Big World’s Zach and Tori Roloff have sold their Oregon starter home for $30K above the asking price after they moved into their $1M mansion.

The Sun can exclusively reveal the couple officially sold their six-bed, two-and-half bathroom home as they moved to Washington.

The Sun can exclusively share Tori, 31, and Zach, 32, listed their property back in October for $700K and sold the home in December.

They pocketed the extra $30K as the Portland home sold for $730K.

The pair’s old home features a two-car garage down the driveway of the mint-green colored home.

All of the walls are white and the floor is a light wood throughout the 2,636 square foot home.

read more on the roloffs

Tori and Zach’s two-story house boasts a skylight and a rustic chandelier in the entryway.

The LPBW stars’ kitchen is clean and minimalistic with plenty of cabinet storage space.

Their living room is complete with an exposed brick fireplace and sits off of the dining room which has just enough space to fit a long table.

The master bedroom is also decorated in a minimalistic style, with a closet and a bathroom with his-and-her sinks attached.

Tori and Zach’s old home also had enough rooms for their nursery, children’s rooms, and office.

The family has left behind a personable backyard patio which includes a grill and a hand-built baby swing.

Although now, Tori and Zach have left the Oregon home behind to make new memories in Washington with their children Jackson, five, Lilah, two, and their newborn Josiah.

On a recent episode of the TLC series, the two welcomed cameras as they gave Zach’s mom, Amy, and her new husband Chris Marek a tour of the property, which they moved into last October.

“The kitchen is a dream kitchen. And it’s move-in ready and new,” Amy gushed about the open floor plan. “I’m excited about everything on the inside.  I just love it.”

Zach is also high on the kitchen feel, especially considering that unlike their last house, the new one has no high cabinets.

“My thing about the old house was anything up high, I just left on the counter,” Zach said, as Tori interrupted: “Which was totally acceptable because that’s life. But now there is no excuse as to why you can’t put everything way.”

Zach was equally excited to show off the backyard possibilities.

“I have a lot of ideas for this property,” Zach exclaimed in the episode, which was filmed just two weeks after they moved in.

The reality star says he has plans for an outdoor play area for his kids, along with an area for landscaping.

Jackson was excited to show off the chicken coop that came with the house and the chickens he has been promised to adopt.

Although the family appears to be excited about their fresh start, fans have had other opinions.

Fans have ripped Tori and Zach’s new home as “ugly” after spotting an “eyesore” yard on the show.

In the episode, viewers were quick to spot a massive construction zone next to the house, with tons of heavy equipment, a huge pile of dirt, and unkempt trees surrounding the area.

As Amy and Chris, the latter who is a realtor, drive up to the home, Chris says: “First impressions aren’t all that great from a realtor’s standpoint.”

“It’s not an attractive flag lot,” he adds.

The camera pans to more overgrown shrubbery and a random broken down trampoline with a horse standing next to it in the backyard.

Amy jumps in and says: “You’re definitely looking at it from a realtor’s standpoint.”

Fans on Reddit were critical of the yard, with one saying: “Housing market is crap right now but if I’m dropping a million on a new house I don’t wanna see everyones junk right outside my window, let alone what seems to be old abandoned homes.”

Fans have also called out their home as “messy” as beds were unmade and toys were strewn across the floors.

Meanwhile, Zach’s twin brother Jeremy and his wife Audrey have moved into a $1.5M farm just minutes down the road from Roloff Farms, which is also for sale.

They are the parents of three children: Ember, four; Bode, two; and newborn baby Radley.

It boasts a vast living room with exposed brick and wood paneling.

The stars can enjoy breathtaking views of the surrounding forest and mountains as they unwind in the evenings.

As well as four bedrooms and another reception room, there is also a games room which is large enough to accommodate a snooker table.

Outside, an expansive patio offers an incredible view of the trestle bridge, where Jeremy and Audrey got engaged back in 2015.

TLCZach’s mom Amy, her husband Chris Marek, and fans had their doubts about the new property[/caption]