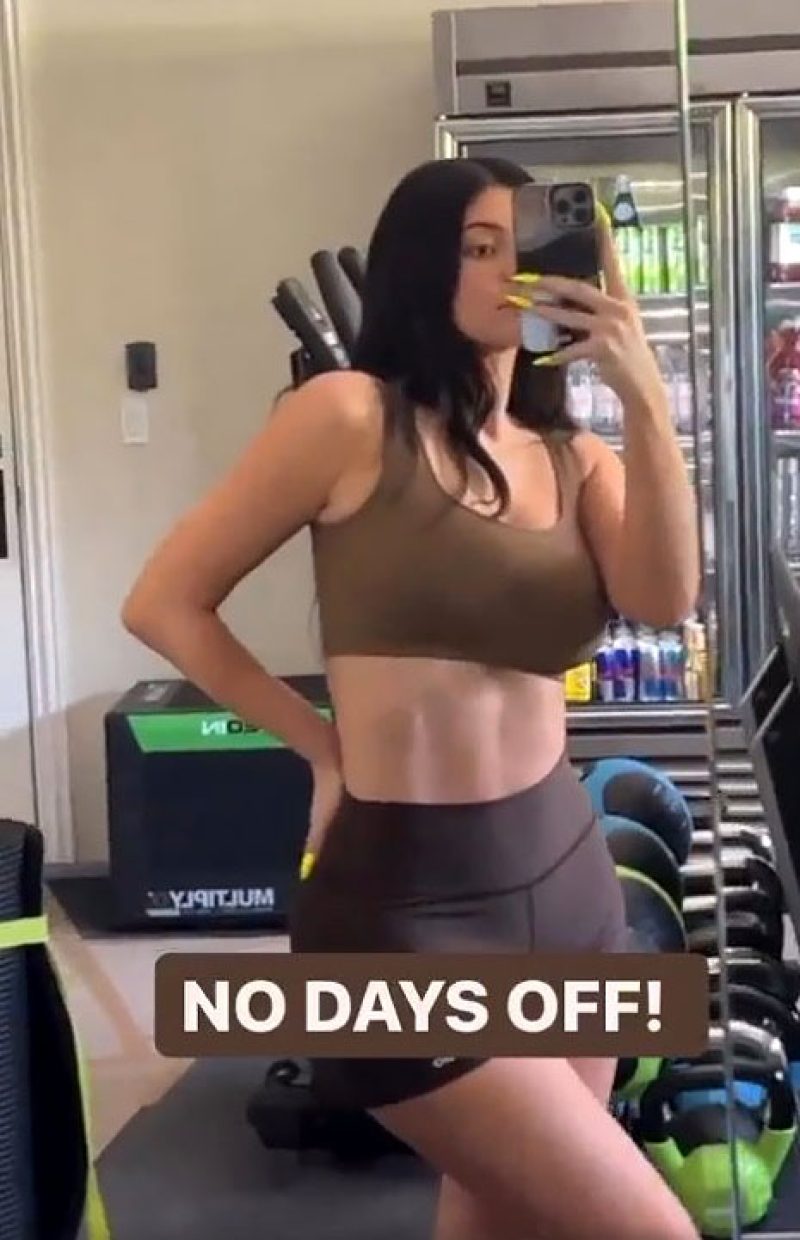 KYLIE Jenner has posted another honest body update, as she continues to work herself back into shape after giving birth in February.

The Kardashians star showed off her post-baby curves while snapping a selfie in front of her gym mirror.

Not known, clear with picture deskKylie is working to lose her baby weight[/caption]

She rocked her hips back and forth in a boomerang, and added the caption: “No days off!”

In another shot, Kylie filmed herself walking on a treadmill. She was much more open and revealing about her progress in the caption.

“4 months postpartum,” she shared. “I have been dealing with tons of back and knee pain this time so it slows down my workouts.

“But I am on a mission to get strong again.”

Kylie has been praised before for showing her true self on social media.

The makeup-free video resurfaced on Reddit as fans praised the star for looking refreshed.

One said: “She looks different and more natural. Love it,” as another added, “Nothing beats Kylie wearing a natural makeup look.”

A fan chimed in: “I love seeing Kylie like this. As natural as possible, no filters, etc. I think she’s just such a goddess.”

Another wrote: “Love a minimalist Kylie,” and one commented, “This Kylie is a whole vibe.”

The mom of two has also been praised by fans for showing off her “stretch marks and extra weight” on her postpartum body.

The Keeping Up With the Kardashians alum was lauded for “normalizing normal bodies” when she shared a photo of her stomach with her baby son’s feet resting on it.

Kylie posted the snap of just the bottom of her baby’s feet on her tummy, taking the photo from above.

Her fans flocked to a Kardashian Reddit thread to praise her for sharing the reality of postpartum bodies.

One wrote: “As a mommy, I love the rawness of this picture. The stretched skin, the postpartum tummy, the little extra weight. I just love it.”

Another added: “I love that she posted this. Normalizing normal bodies.”

“For women who have such big platforms, this is the type of content we need from them! I love this so much!” a third posted.

Another fan declared: “Honestly, this is probably the most beautiful picture she’s ever posted.”

Not known, clear with picture deskThe model documented her pregnancy and postpartum journey[/caption]