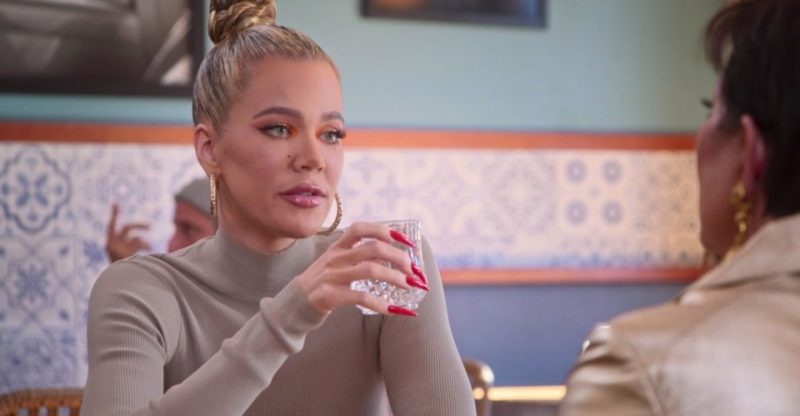 Eagle-eyed fans who watch the The Kardashians Hulu show were quick to notice something odd with her fingers.

On the latest episode, Khloe, 37, is having lunch with her mom Kris Jenner, 66,  at a restaurant.

As she picks up a clear glass of water, her pinky finger looks to bend in a very peculiar way.

A KUWTK fan posted a video on TikTok, which now has more than 4M views, pointing out the oddity.

The caption reading, “Did anyone else notice the fake fingertips?!”

Fans were quick to respond, with one writing, “They’re like the nails I used to wear trick or treating.”

Another reasoning, “She prob didn’t have her nails done and knew she’d be shooting the show so she put those on.”

Others stood up for the reality star: “Girl what? That’s her finger just pushed against the glass.”

Another relating to the Kardashian sister saying, “My fingers do that too haha she just has long fingers.”

Fans have noticed a lot of changes for the Hulu star, and frequent photoshopping.

Back in April, during an interview on ABC, Khloe opened up about getting plastic surgery.

The Good American co-founder admitted that she “loves” the look of her nose.

Khloe confessed to host Robin Roberts about how she was hesitant to go under the knife at first.

She said: “I never felt like the pretty sister, and I’ve always had a love/hate relationship with fashion because, at my heaviest, I was a size 12/14, which is a no-no in most stores.”

Back in June 2021, Khloe confirmed she had previously gotten a nose job.

During the KUWTK reunion special, the mother of one spoke to host Andy Cohen about her past plastic surgeries.

Khloe said: “For me, everyone says, ‘Oh my gosh, she’s had her third face transplant!’

She revealed: “Everyone gets so upset, like, why don’t I talk about it? No one’s ever asked me!

“You’re the first person that’s ever asked me in an interview about my nose.

The model and entrepreneur has been seemingly altering her digital look for years.

In May 2020, she stunned fans with a drastic change to her appearance after she darkened her blonde hair.