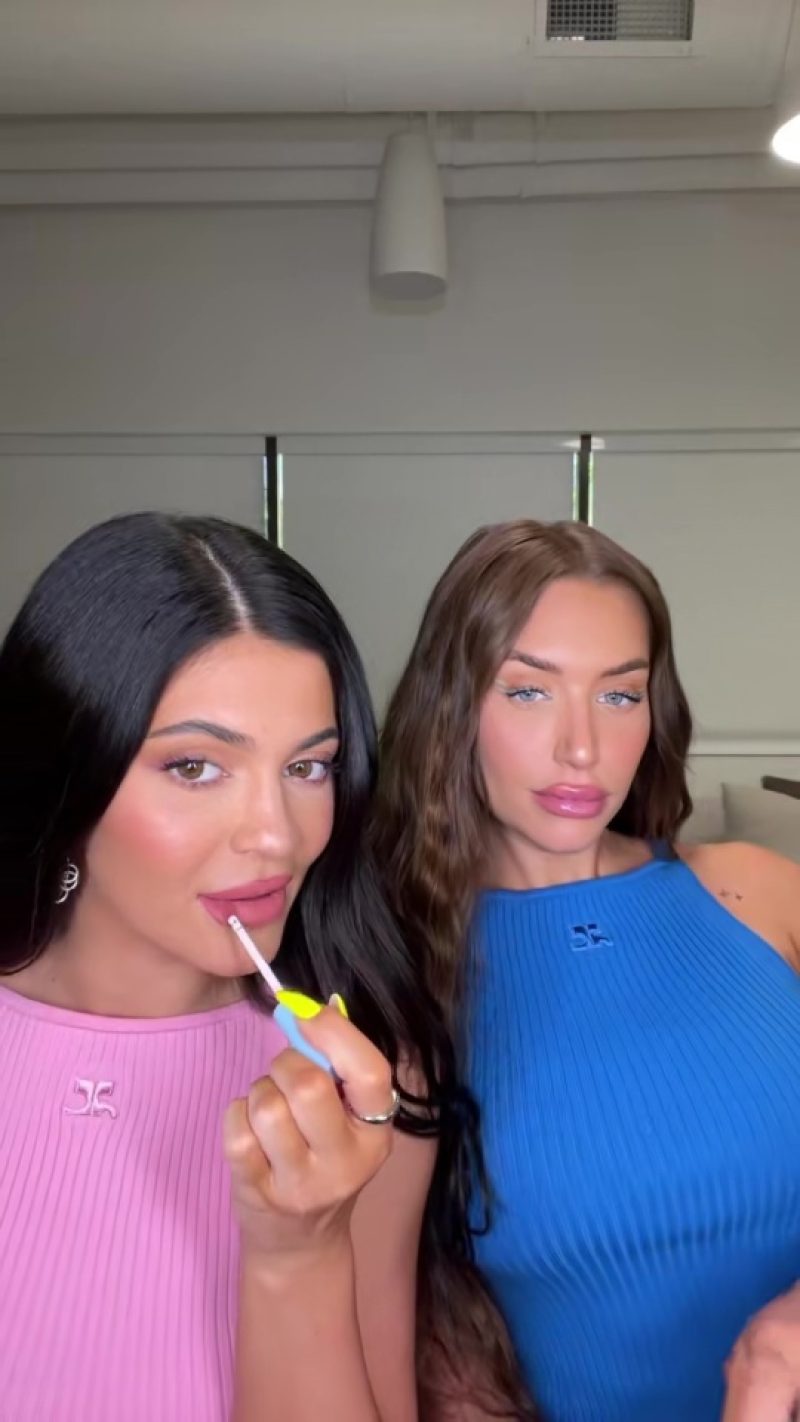 Stassie and Kylie shared a video to TikTok of the two models applying lip gloss, ahead of the release today of their stas x kylie mini cosmetics collection on KylieCosmetics.com.

“Stassie what did you do??” one worried fan asked, while another followed, “Stassie???? She changed her face??”

A third noted: “Stassie don’t even look like Stassie anymore.”

Others said her history of plastic surgery has only served to age her.

Many felt with her enhanced lips and eyes, she looked like the doppelgänger of her parents – both of them.

“Stassie looks like she can be Kylie’s mom,” said one follower, as another countered: “Help! I thought that was her dad for a minute.”

In April, Kylie’s bestie admitted to past “botched” procedures and boldly listed what parts she’s had done – and “redone.”

Appearing on the April 13th episode of the Call Her Daddy podcast, Stassie gave a shocking an revealing interview.

She spoke in-depth on “beauty standards,” how fans will say the “nastiest sh**” and her plastic surgery journey filled with “mistakes” before finding her current “natural” happy medium.

“I wanted to feel good about my ti**ies so I did them, and other things too,” she boldly began.

When asked about her “first procedure,” Stassie replied: “Lip filler.”

The brunette beauty added that the facility was “Not at a good place. Do your research.”

“I didn’t do it good – I looked like [she pouted her lips]. I looked not cute, I had to dissolve it all and get it all redone.”

Stassie boldly spoke further about her lips since: “I literally got my lips tattooed yesterday because when you get lip filler it ruins the color of your lip naturally.

“My lips were so pink and when you get lip fillers I swear they turned a white color.

Her BFF Kylie famous first got her lip fillers in 2015 and her pout is part of her brand.

“I have this thing where I talk out of one side of my mouth, one side sits higher; I tried to correct it with lip filler so many times that it started looking worse.”

“Someone gets work done and it doesn’t look good –  do you really think that’s how they wanted it to turn out?” she bravely continued.

“They’re trying to fix an insecurity.”

Last week, Kylie  took to her Instagram profile to share a full glam photo alongside her best friend.

In the image, the TV personality and her pal posed in identical latex bodysuits, one in pink and one in blue.

The thong outfits came with matching latex gloves, and Kylie sported a pink wig to match her look while Stassi rocked a blue wig to complete her own.

Both girls wore full glam makeup as they modeled their collaboration collection together.

The Hulu star captioned her post: “AHHHH FINALLY !! @staskaranikolaou and I started dreaming of this collab a few years ago and we finally made it happen.

“Our mini collection includes a gloss duo, a special Stassie lip kit, a highlighter in Stas’s perfect shade, and two fun liquid eyeliner pens. it was so special creating this with my best friend.”

Call Her DaddyStassie shared her surgery history on a podcast[/caption]