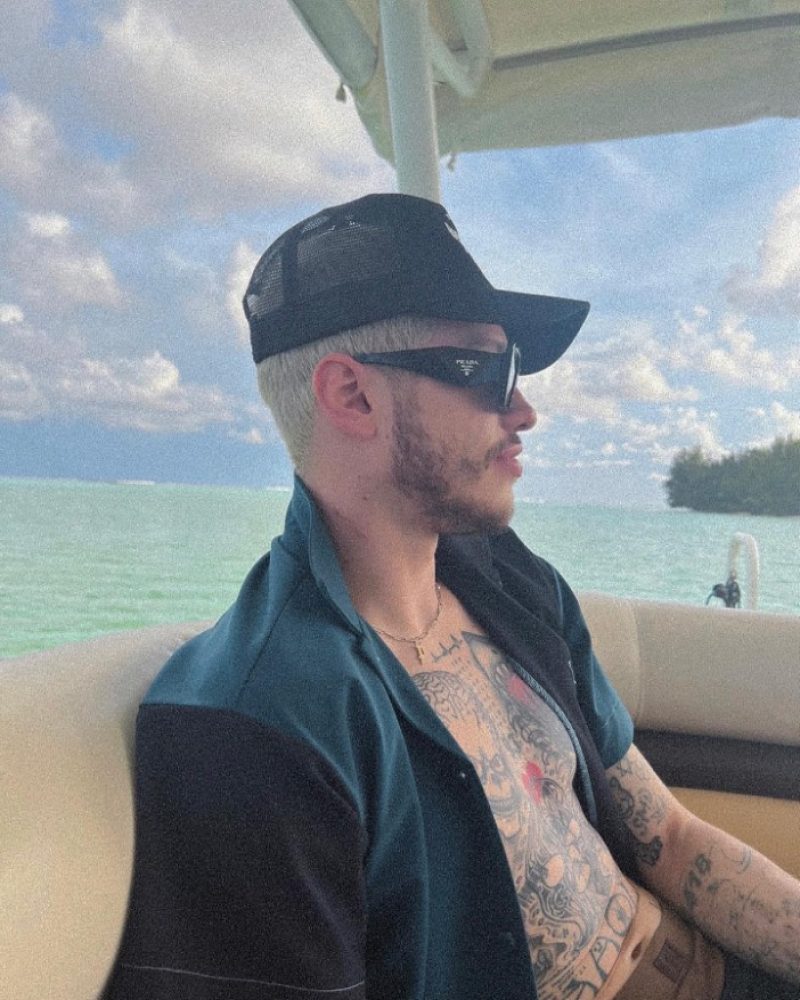 Kim, 41, shared a variety of photos of videos wearing a tiny black string bikini while on a secluded sexy getaway with her boyfriend Pete, 28.

One of the photos in the series posted to Instagram shows a close-up of Pete on a boat, wearing black collared shirt, black Prada sunglasses and a hat.

Fans scrutinizing the picture noticed a recent tattoo on his neck has been photoshopped out.

A few months ago, the initials of Kim and Kanye’s four kids seemed to appear on his neck.

He was spotted with the shocking ink shortly before his Met Gala debut with Kim at the beginning of May.

The tattoo simply read: “KNSCP” – the first initial standing for his famous girlfriend and is near his collarbone.

The order of the children’s initials then goes from the oldest to youngest – and while fans immediately ripped it as “weird.”

One fan posted: “KNSCP – Kim, north, saint, Chicago, Psalm?!? He cannot tattoo the West kids’ initials when those are not his kids!!! Major red flags!! Kim is freakin crazy herself to allow him to do that!!”

Others his ink is a publicity stunt cooked up by momager Kris with the fan writing, “Pete seems like the type to not care about tattoos and just tattoo whatever on himself, so I could imagine him tattooing and ‘branding’ himself is a plot baked up by Kim and Kris.”

Fans on Reddit were quick to notice the omission in the vacation pictures.

One fan said, “Good, because that’s one of the stupidest things he’s ever done, plus creepy.”

Another Redditor asked, “Are we sure the collar isn’t covering that area of his neck?”

It isn’t the only tattoo he has seemed to get for Kim.

Kim posted a black-and-white close-up shot of another Pete tattoo recently, which in giant black letters, reads how his “girl” happened to be a “lawyer.”

The E! star had previously failed the bar exam numerous times before finally passing the test.

Pete also has a neck “BRAND” which reads “Kim.”

Kim and Pete recently vacationed on a beach in a secluded sexy getaway.

She posted Instagram photos of her and Pete together standing knee-deep in the crystal blue water kissing, with her hand around his waist.

The two are also seen in the middle of the ocean on a canoe together.

Pete seems to take hold of the camera for one shot, with Kim leaning back with her sensational figure on display, as viewers see part of his feet touching hers on the boat.

One photo shows Kim gazing down the beach adjusting her bikini bottom, trying to avoid a wardrobe malfunction before stepping into the crystal water.

Pete joins her in the water, shirtless with his other tattoos visible, wearing matching black swim trunks.