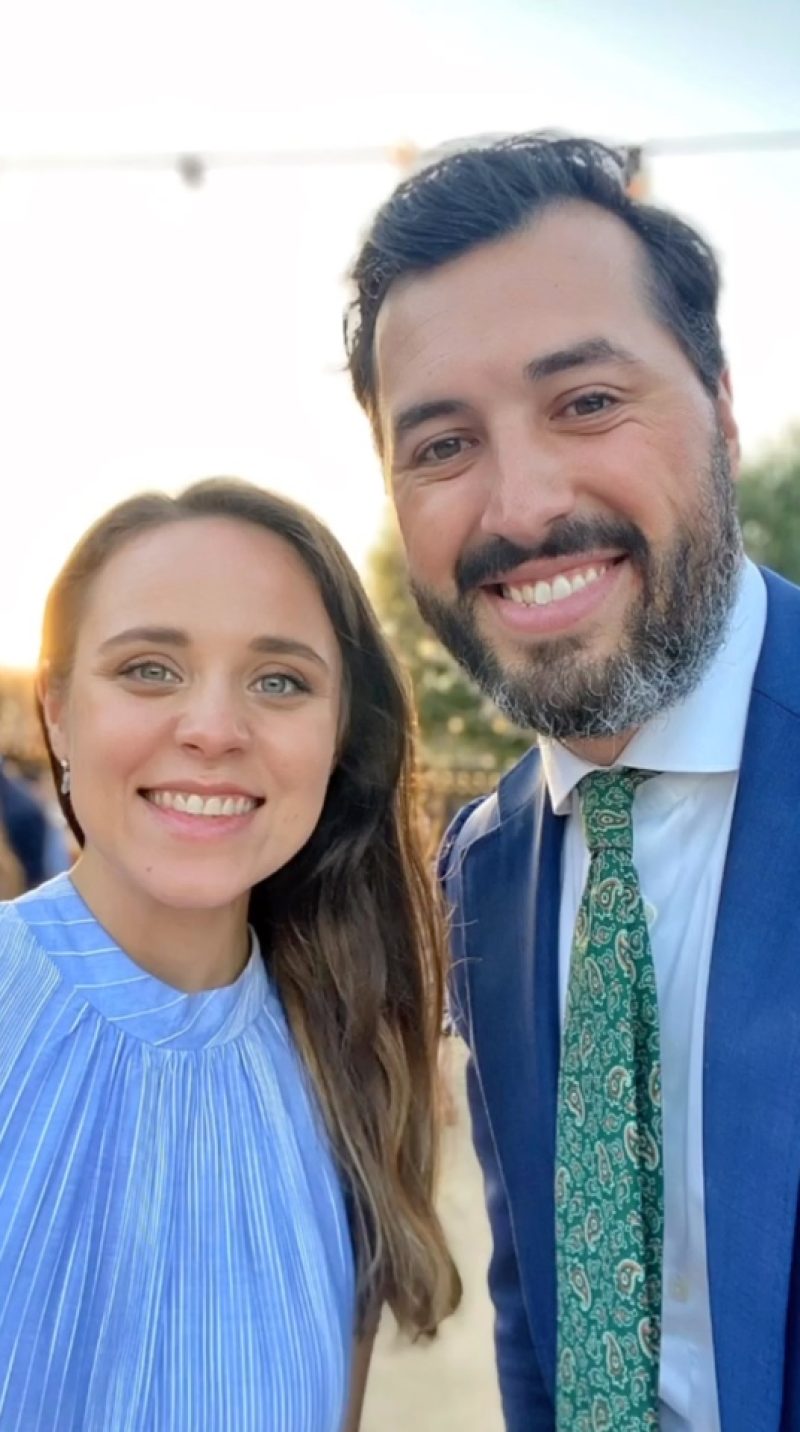 She attended a wedding with her husband, Jeremy Vuolo, and their young children.

In the photo, they were both smiling and wearing blue outfits, as they attended a friend’s wedding.

Jeremy wore a blue suit with a white shirt and a green patterned tie.

Meanwhile, Jinger wore a blue dress that came up to her neck but was sleeveless.

The dress clearly defied her father’s strict rules of women covering up and not showing any skin.

Jinger reposted the photo to her Instagram Story and even made a snap of herself in the blue dress her profile picture.

Jeremy posted a photo of the family earlier that weekend that showed off his wife’s full outfit.

They all matched in blue as their daughters were flower girls at the wedding.

Jeremy shared a rare photo of the entire family as they attended a wedding over the weekend.

All four of them stood with their backs to the camera and their daughters’ faces were completely turned away from the camera.

The couple share daughters Felicity, three, and Evangeline, one.

Jeremy completed his outfit with cream pants while Jinger wore a short, blue dress that came above her knees and showed off her arms.

“Summer is wedding season. It’s also swimming season. Here’s me and Jinger at our friend’s wedding last night making sure the flower girls didn’t swan dive into the fountain,” the dad of two captioned the photo.

The rare picture came after they revealed they wanted to give their children “more privacy.”

Counting On alum Jinger also took a snapshot of Felicity while on the run.

Back in April 2021, Jinger revealed that the pair chooses to keep their kids off of social media and the reason why.

The revelation came as the former TV star answered questions from her fans on social media.

“I think I have an idea but why no pictures of your girls? Not being judgemental just asking,” a follower asked.

To which Jinger responded, “The girls are doing great! Felicity is absolutely smitten by her little sister and Evy adores Felicity.

“You haven’t seen much of them simply because we are wanting to give them a bit more privacy while they’re so young.”

She added: “We appreciate how much you love and support our family. It means so much to us! Thanks for asking.”

Earlier in June, Jinger and Jeremy attended the Masters’ Seminary, which trains men for pastoral ministry.

She defied the rules once again by wearing a short, red floral dress to the event.

The stunning dress was cut just before her knees.

Jinger showed off her long, bare legs as she strutted across the red carpet in beige high heels.

Jeremy looked dapper as he wore a gray suit for the red carpet event.

He graduated from the Masters’ Seminary in May after completing their Master of Divinity program.

The Duggar family observed a strict dress code that usually only permitted women to dress modestly and to wear dresses.

Jinger and her siblings have continuously defied their parent’s rules by wearing short dresses, shorts, and pants.