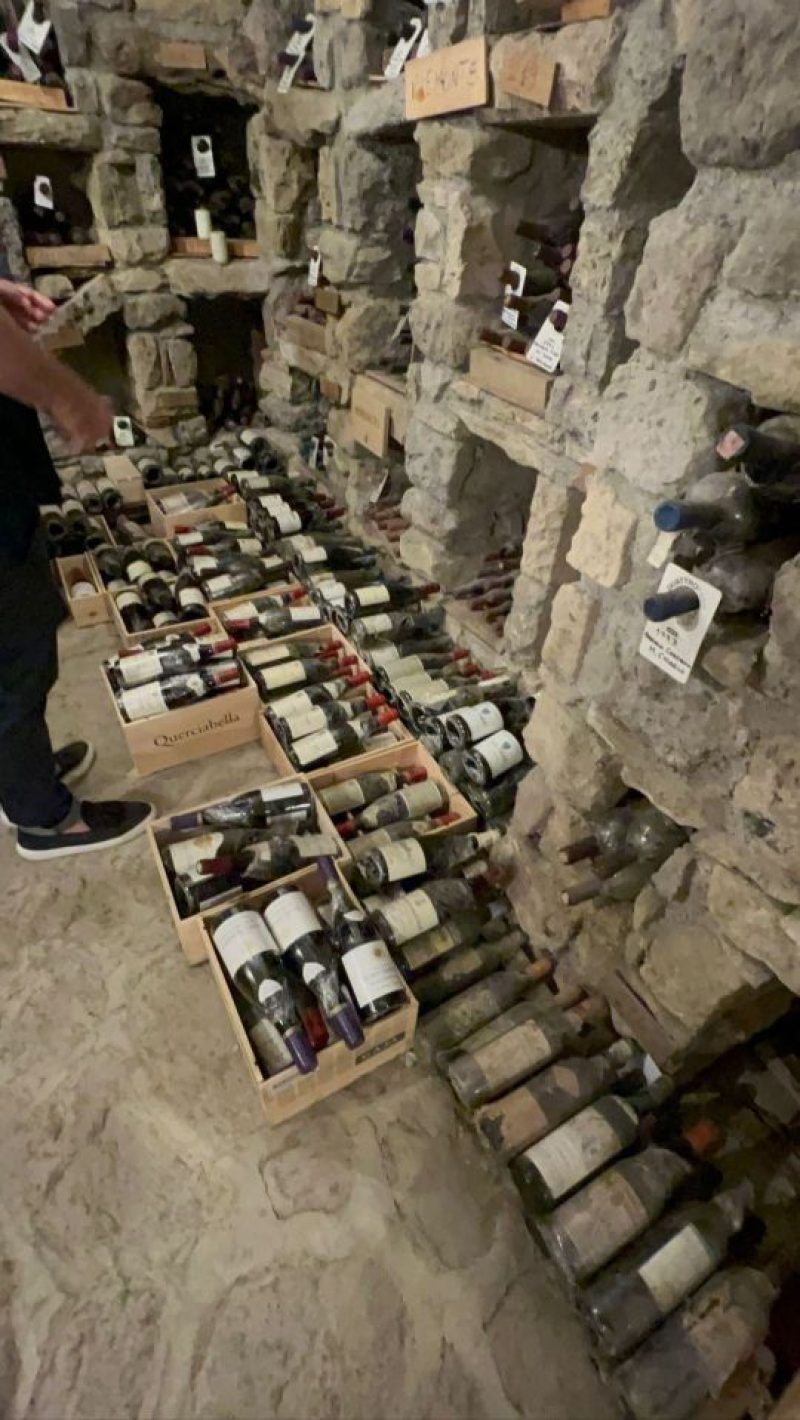 INSIDE Kris Jenner’s Italian getaway with boyfriend Corey Gamble that included dancing on a $45million yacht and exploring an underground wine cave.

Kris, 66, and Corey, 41, were rumored to have split after the boyfriend was missing from daughter Kourtney Kardashian’s wedding to rockstar drummer Travis Barker.

The momager has posted several photos and videos to her Instagram from her and Corey’s scenic vacation along the Amalfi Coast.

And also why the former road manager danced his way down the aisle of a private jet on route to the Italian vacation.

Kris posted the first, of what would be many photographs, to her Instagram.

WHAT HAPPENS AT SEA…

In it, both she and Corey stand on the deck of a $45millon yacht with the blue ocean waters and sprawling coastline behind them.

Kris, wearing a pink patterned dress with a matching head scarf, holds onto the railing as Cory, sporting a similarly-colored pastel cabana shirt and matching shorts, holds onto her.

Kris captioned the post: “Beautiful week sailing the Amalfi Coast with @coreygamble followed by a bevy of heart emojis.”

The next post showcases a seaside dinner at the coastal beach resort La Scogliera.

Kris shows love to her’s and Corey’s traveling mates, one of which she thanked previously for her designer sandals, in the caption of the post.

“An amazing trip to the Mediterranean with our besties and partners in crime @thomasjhilfiger @mrshilfiger! Thank you Tommy and Dee for the heavenly week full of fun and laughter we treasure your friendship and love you dearly. love you @coreygamble.”

A video of the sun setting into the Mediterranean, a photo of a lobster dinner, and a group picture with fashion designer Tommy Hilfiger, his wife – former fashion model and current financier – Dee OCleppo, Corey, and the restaurant’s chef round out the remainder of the post.

Kris then filled her Instagram story with highlights from the trip.

The momager writes, “He’s in heaven”, on a photo of Corey surrounded by the ceiling-high shelves of wine.

Another photo shows Tommy in the midst of a table-wide toast and is followed by a picture of his wife posing, ballerina-like, back on the deck of their yacht.

INSTAGRAM/krisjennerKris captioned this photo of her boyfriend Corey Gamble, ‘He’s in heaven’, as any wine lover would when visting this cellar[/caption]

Kris captions this one: “She’s a dancer.”

The story continues with a video of lights dotting the coastline in the distance and another brightly lit two-story yacht sailing close by.

It finishes with another shoutout to the couples chef, Tonino, and more photos of the lovebirds and the Hilfigers relaxing together.

Speculation began when Corey was nowhere to be seen in all of Kourtney’s wedding photos.

Although fans could come up with a reasonable explanation for the others’ absences, Corey’s disappearance set fans’ radars buzzing.

Kardashian followers immediately took to Reddit as one began a thread by posting a photo of Corey and Kris arm-in-arm.

They captioned it: “What is going on?”

Another replied: “We know that on May 15th they were having dinner at Giorgio Baldi’s.”

The fan continued to speculate: “Did they suddenly break up? Corey loves to have fun, he would never skip the wedding.”

A third asked: “Where is Corey?”

Yet a fourth replied and contributed to the theories: “You have to be boosted to go to Italy, so maybe he’s not vaccinated?”

A fifth fan reasoned through other Kardashian men’s absences: “Pete. We know he was busy.

“Travis [Scott]. I think he prefers his relationship only with Kylie and that he doesn’t want to get involved in family things.

The same fan demanded: “But Corey? What happened? I have to know!”

Any rumors of a break-up have been put to rest after Kris and Corey’s Italian getaway.

Kris confirmed that her relationship is still going strong after she was pictured enjoying the Sardinian coast with Corey.

INSTAGRAM/krisjennerKris, Corey, Tommy, and Dee are photographed with their chef Tonino[/caption]

The momager looked glamorous in a colorful dress, large gold necklace, and straw sunhat, while her man dressed in a mustard yellow shirt, linen shorts, and a gold chain.

Corey moved throughout the boat holding a glass of red wine before the four departed on their journey.

Later Corey was caught showing his affection for the momager as he grabbed her booty during their yacht ride together.

Kris flashed her famous, if not devious, smile at the gesture.

The PDA-filled moment was shocking to fans as the longtime couple usually keeps that side of their relationship private.

One surprised Redditor commented on the move: “I’ve never seen Corey grabs Kris’ a** before.”

Another agreed with the statement, pointing out their public location: “In the middle of Italy.”

Kris gushed about their getaway on Instagram as she shared a pic of the pair on the boat.

Corey shared a different snap of them kissing with the gorgeous view in the background.