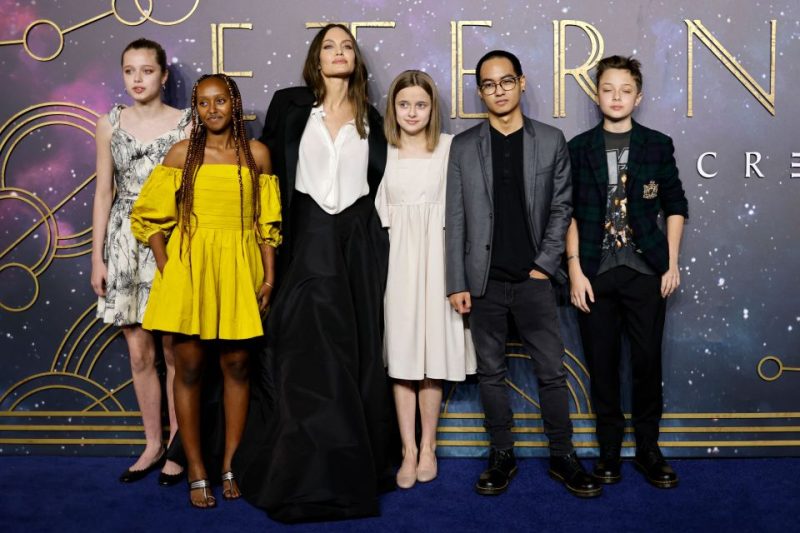 NOT only do actors dream of achieving huge stardom, some dream of having huge families.

Let’s take a look at the celebrities who have achieved their ambitions of a supersized clan as we go inside Hollywood’s biggest families.

AFPWith six children, Angelina Jolie has one of the biggest clans in showbiz[/caption]

In 2006, the couple welcomed their first biological child, a daughter named Shiloh, who is now 16.

They went on to have two twins, a boy Knox and a girl Vivienne who were born in 2008 in France.

INSTAGRAM/nickcannonNick Cannon is soon expecting his eighth, or possibly even ninth child[/caption]

Mariah Carey, whom he was married to from 2008 to 2016, is the mom to their twins Monroe and Moroccan.

The Masked Singer host then went on to have two more twins with his then-partner Abby de la Rosa.

Zion and Zillion, born June 2021, made kids number five and six for Nick.

Alyssa Scott, who appeared as a model on Nick’s music game show Wild ’n Out, gave birth later that month to Zen.

However, Zen passed away five months later from a malignant brain tumor.

Most recently, model Bre Tiesi revealed that she is expecting Nick’s eighth child, while he also hinted that baby number nine could be on the way.

64-year-old Alec Baldwin comes from a big family, so it’s no wonder that he went on to have a lot of children himself.

His most famous kid is Ireland Baldwin, who is a 28-year-old model and his only child with Kim Basinger, 68.

But the Beetlejuice star has six other children with his second wife Hilaria, 38.

Together they share daughters Carmen, eight, and Maria, one, and sons Rafael, six, Leonardo, five, Romeo, four, and Eduardo, one.

In March this year, Hilaria announced she is expecting her seventh child with Alec.

61-year-old Eddie Murphy has 10 children with a huge span of age ranges.

His eldest children, sons Eric and Christian, were born in 1989 and 1990 with his then-girlfriends Paulette McNeely and Tamara Hood respectively.

In 1993, the comedian married Nicole Mitchell, with whom he would go on to share five children; Bria, Myles, Shayne, Zola and Bella.

Following his divorce from Nicole in 2006, he started dating Spice Girl Melanie B, with whom he fathered a daughter, Angel, on his birthday a year later.

Most recently, the Beverly Hills Cop star welcomed a daughter, Izzy, six and a son, three-year-old Max, with Australian model Paige Butcher, who is 18 years his junior.

Her oldest children are from her marriage to lawyer Rob Kardashian, who passed away in 2003.

Kris also has one son from her first marriage, 35-year-old Rob.

During her second marriage, she welcomed Kylie, 24, and Kendall 26.

One of the closest-knit families in showbiz, all of Kris’ children have appeared in their family’s reality shows over the years.

GettyJim Bob and Michelle Duggar stopped the count at 19[/caption]

With their shows 19 Kids and Counting and Counting On, 56-year-old Jim Bob and his 55-year-old wife Michelle built a reality TV career from their super-sized family.

Their son Josh, 34, was recently sentenced to 12 years in prison on child pornography charges.

Madonna, 63, has six children, starting with her eldest Lourdes, who is now 25.

The Queen of Pop met Guy Ritchie in 1998 and they welcomed their son Rocco two years later.

Madonna went on to adopt three more children, Mercy, 16, and Stelle and Estere, both nine.

Clint Eastwood, now 92, has eight children overall from a range of marriages, relationships, and affairs.

The Western legend welcomed his first child Laurie in 1954 with an unknown woman, whom he cheated on his future wife Maggie with.

Maggie then gave birth to Clint’s children Kyle and Alison, in 1968 and 1972 respectively.

While they were married, the movie star had an affair with stuntwoman Roxanne Tunis, resulting in a daughter Kimber in 1964.

Clint then went on to have an unpublicized affair with a flight attendant, Jacelyn Reeves.

In the 90s, the Dirty Harry legend had a daughter, Francesca, 28, with his then-girlfriend Frances Fisher.

In 1996, he was married to news anchor Dina Ruiz and they welcomed his last child, a daughter Morgan, the same year.