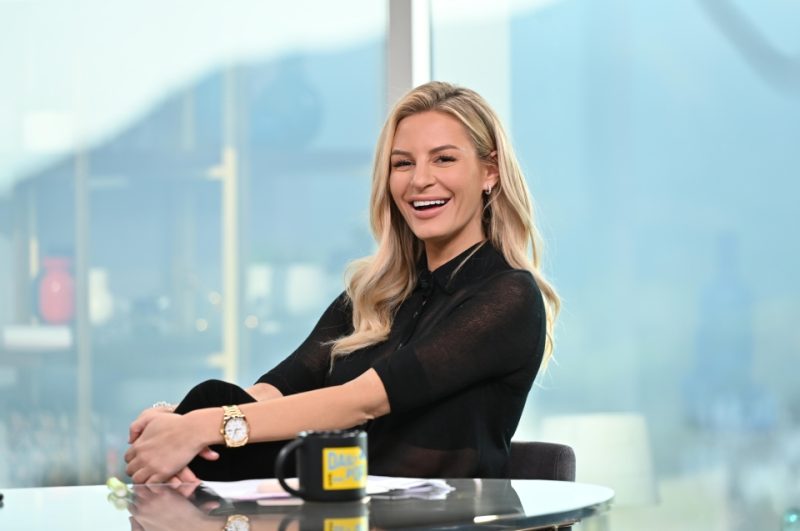 The Rich Kids of Beverly Hills alum, 34, returned to the daytime program after being out on maternity leave following the birth of her second child in February.

After being away for a while, Morgan returned to Daily Pop on Monday and opened up about now being a mother of two.

She also revealed that she had some news to share with viewers.

Sitting alongside co-hosts Justin Sylvester and Loni Love, she shared: “Today is unfortunately going to be my last official day on Daily Pop.”

“It was a very hard decision.

“But this time I was pregnant for so long, I want to enjoy the mornings with my babies while they’re still babies.”

Everything to know about Daily Pop host Morgan Stewart’s children

Morgan continued: “I just feel like this time is so short, and I just want to be there to say good morning to my babies.”

The 34-year-old made sure fans felt her love and told them: “I’ve gotten all of your messages and I so appreciate it.

“I’m very upset about it. I’m gonna miss the staff and everybody. It’s been what, five years?”

Online, Loni sent her some love, writing: “It’s been a great 5 year run with @morganstewart at @edailypop.

“But family comes first and my boo boos need their Mom!!! Love you and still can see you on #nightlyPop!!! @justinasylvester”

Though she’ll be leaving Daily Pop, the host will be continuing on with Nightly Pop, alongside Hunter March and Nina Parker.

Fans felt blindsided by the news, though, especially after Morgan tweeted last week about her Daily return and teased that it would be only good news.

“I’m coming back to work on MONDAY,” she wrote.

The 34-year-old went on to promise that “no changes will be made,” even adding in an angel emoji.

Just a few days later, when she did show up on Daily Pop, she revealed that a major change was being made – she was leaving the daytime talk show.

One upset fan tweeted about the news: “Just tuned in to #DailyPop, and @Morgan_Stewart is saying GOODBYE?!

Another wrote: “Not even cool that you’re leaving @edailypop waited all this time just to have you leave again!!

“Ugh kids ruin everything. Even my husband doesn’t like to watch unless you’re on lol!!”

A third saddened viewer said: “I can’t believe we were waiting all this time for @Morgan_Stewart to come back and the first day she’s like byyyeeeee”

“Wait, so sad @Morgan_Stewart won’t be on daily pop anymore, but I understand putting family first,” wrote another.

Morgan had been on maternity leave after welcoming her second child with Dr. Phil’s son, Jordan McGraw, in February.

At the time, she shared an Instagram photo of herself cradling the little one in a hospital bed.

“GREY OLIVER MCGRAW joined us exactly one year and a day after his big sister and we are so in love,” she captioned it.

Her husband Jordan shared an IG photo of his own, holding the infant, writing, “Grey Oliver McGraw. 2/17/22.”

Morgan wrote “Dada,” while his mom Robin McGraw wrote, “Our son has a son! Congratulations Morgan and Jordan and sister Row!!! We love you Grey Oliver!! xoxoxo”

The couple, who wed in December 2020, are also parents to daughter Row, one.

Morgan and Jordan dated a decade ago before rekindling their relationship after her split from her ex-husband, Brendan Fitzpatrick.