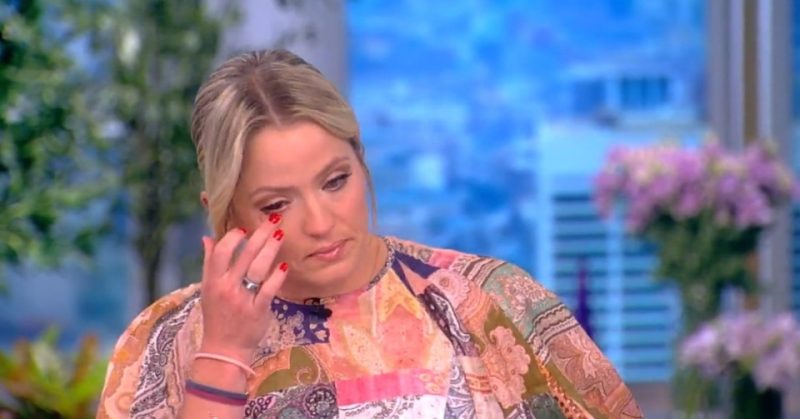 THE View hosts Sunny Hostin and Sara Haines have both broken down in tears during Wednesday’s broadcast.

A Hot Topics segment on gun control has left the pair emotional as they made a plea for changes to be made.

In the latest episode, Sunny, 53, and Sara, 44, and the rest of the View hosting panel had another discussion on gun control in the country.

They continued to share their frustration over what little’s being done about the consistent mass shootings taking place.

Sara started to break down in tears as she said: “The part that really bothers me here is, and I speak as a parent right now, there are so many things we can’t take from our kids.

The mother of two continued: “There are so many things that we will have to be there to hold them up and say, ‘We can’t take this from you.’

“This, we can do something about. And so as a parent, I don’t know how you get in a room and say when there are so many gun owners — like Matthew McConaughey, like my parents — who will say, ‘this stuff makes sense.’

“Why are we not coming together and just looking at these little faces and saying, ‘This is one thing we can change.’?”

Soon, Sunny joined in, choking back tears, as well.

“We’ve been emotional about this. I have to agree,” she said.

She went on to explain why she thinks photos of these massacres should be shown in order to force changes in gun legislation.

Sunny added: “I know that parents want to remember their children in life, and not in death, [but] photos matter.”

Barbara Walters created the talk show in 1997 to give women a platform to speak on important topics — both to them and their viewers.

The program has been celebrating 25 years on the air, where they’ve discussed tragedies, politics, entertainment, personal issues, and more.

Last week, the original hosts of The View reunited for a big anniversary celebration, though one key member was missing.

Over the years, a slew of hosts have come and gone, with Joy currently the only original member still on the program.

To celebrate the talk show’s milestone 25th anniversary, the women had a big reunion at New York’s Essex House, where they first auditioned.

In the pre-recorded special, they spent time catching up with one another and reminiscing about their time working together.

Viewers were excited to see the OG hosts reunite but became concerned after seeing that Barbara, 92, was not there for it.

One worried fan tweeted: “So.. we always talk about Barbara but have no real information of what’s going on with her?”

Another wrote: “I don’t think the show has been the same since Barbara left. By the way is she still alive?”

A third begged, “I want to see Barbara!!,” and added a crying emoji.

Barbara led the show until her retirement in 2014, and Whoopi Goldberg, who joined in 2007, is now the show’s moderator.

Along with Whoopi and Joy, Sara and Sunny round out the show’s current hosts.

Barbara has kept out of the spotlight since retiring in 2014 and has not had a public appearance since 2016, only adding to fans’ concerns.