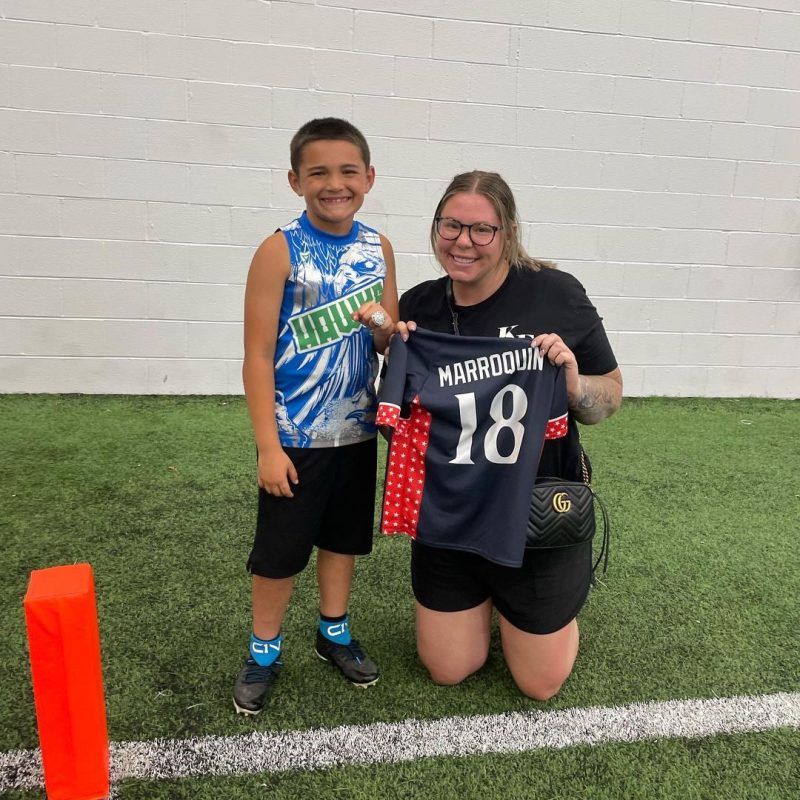 KAILYN Lowry has shared photos strategically covering up her stomach amid fan speculation that she could be pregnant with her fifth child.

InstagramFans believe she could be pregnant with her boyfriend Elijah[/caption]

Now Kailyn, 30, has shared photos concealing her stomach as she supports her son Lincoln at his football game.

In the picture posted on Instagram, the reality star kneeled on the ground next to her eight-year-old as they posed on the sideline of the field.

The little boy gave the camera a big smile while his mom held up a jersey with his last name “Marroquin” on the back.

The tiny shirt was perfectly placed over Kailyn’s mid section amid fan speculation that she could soon welcome her fifth child.

In a second photo, the TV personality stole a glance at her son in a sweet snapshot.

Earlier this week, Kailyn gave a rare insight into her life with her new boyfriend Elijah, 23, and dropped a hint she might be pregnant.

The MTV star posted a series of videos to her Instagram stories promoting personalized vitamins.

She told fans how she took an online quiz to “update her health goals” and to figure out her needs.

Kailyn was then sent the daily vitamins and revealed Elijah also took the test.

“My health goals were different than my boyfriend’s,” Kailyn explained holding up their different packets of pills.

“So he has different vitamins and he’s been doing this for a couple of months too.”

The reality TV star then shared a photo of her dinner which included a big bowl of meaty mac ‘n’ cheese with a slice of garlic bread.

“IYKYK [if you know, you know],” she captioned the Story and tagged her friend Tasia Alexis.

Tasia then shared the photo to her own Instagram Stories adding the caption, “period”, alongside a series of crying/laughing emojis.

The clue came after she set tongues wagging last week when she posted a screenshot of her Google search, which read: “symbolism of a snake.”

According to the search, a serpent represents fertility and rebirth, and could mean a creative life force, transformation, immortality, and healing.

Fans on Reddit were quick to jump to conclusions, one re-sharing the post with the caption: “Oh f**k, here we go. [Kailyn] found a snake so that automatically means fertility. Baby daddy #4?”

“Is she announcing #5?” another wondered.

Last year, Kailyn dropped several hints that she was pregnant.

In October, the TV star posed with a baby blanket reading the name of her podcast: Baby Mamas No Drama.

However, the mother of four seemed to shut down speculation when she replied to fan baby theories with the comment: “Never again.”

Kailyn took to her page to repost a slide that read: “Secure THE bag. And never GET pregnant again.”

The Sun previously confirmed that the 30-year-old is dating her Delaware neighbor Elijah.

One of her exes claimed the pair had already moved in together back in April after only a few months of dating.