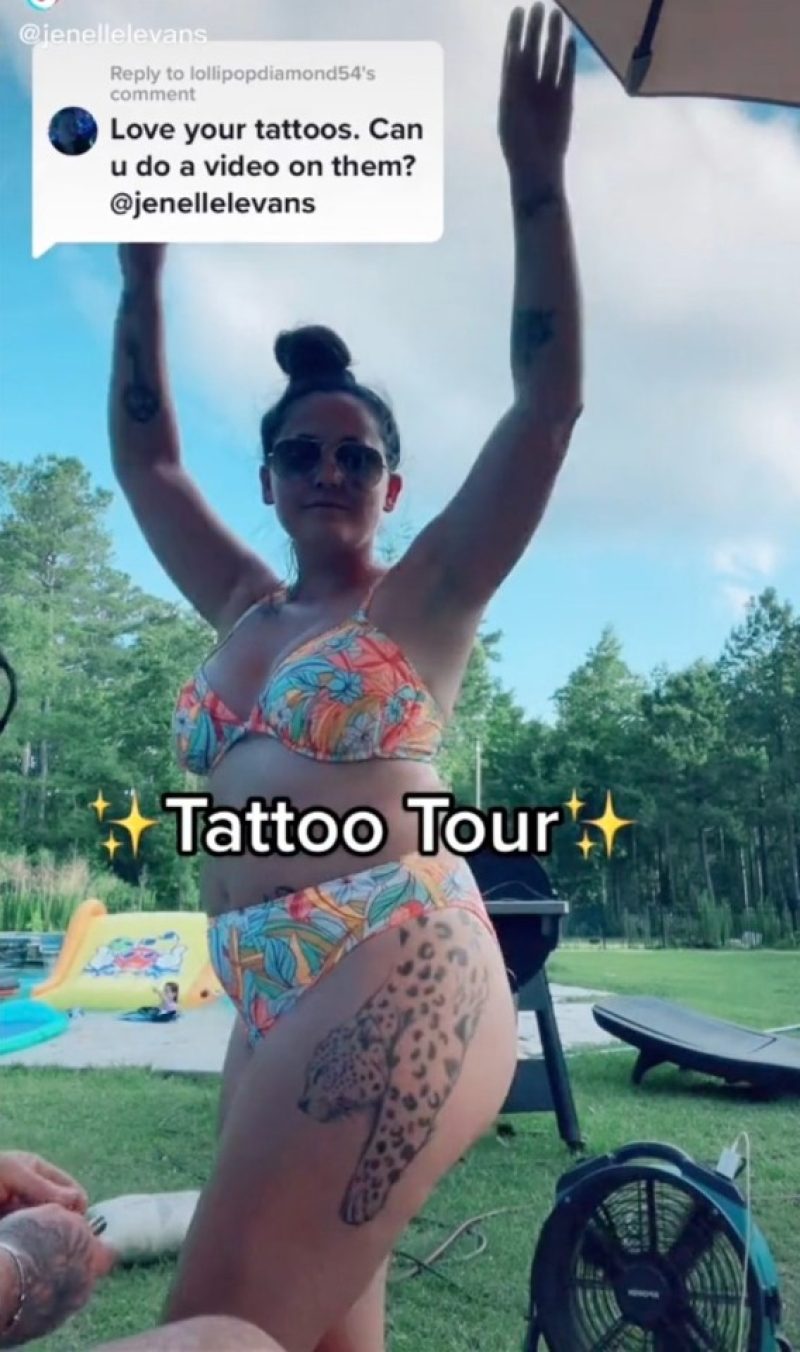 JENELLE Evans has flaunted her curvy figure in a teeny tiny bikini after revealing that she’s eliminated her “beer belly” by switching to wine.

The Teen Mom 2 alum has not been shy about showing off her body after creating her OnlyFans account.

Now Jenelle, 30, has taken to her TikTok profile to give fans a “tattoo tour” while wearing a skimpy bikini.

The reality star posed in her backyard wearing a colorful floral bathing suit as her husband and kids enjoyed the weather in the background.

She began by showing fans her many tattoos, pulling down her bikini bottoms to reveal her entire stomach.

Underneath was a massive ink reading: “This too shall pass” in French.

NO BUTTS ABOUT IT

Jenelle then turned to the side and pulled her bottoms down even further to reveal a huge octopus tattoo that she said she bought to “cover up a name.”

The TV personality moved in close to the camera to show fans her “Yolo” ink right on her collar bone as she shook her head with a smile.

Turning to her left side, the mother of three flaunted her gigantic thigh tattoo of a leopard, before turning completely to the back to show off a big cherry blossom tree with “three roses to cover another name.”

Jenelle pulled her bikini bottoms down yet again to reveal a butterfly sugar skull right above her butt.

The controversial star continued her tour by highlighting her arm tattoos, one for her son Jace, a heart that she shares with all the original Teen Mom 2 stars, a substantial old-fashioned key, and an ink reading “Vahn.”

Finally, she zoomed in on her final body art, a tiny wrist tattoo that she got last month at her co-star Briana DeJesus’ court victory party against Kailyn Lowry.

Throughout the entire clip, Jenelle made sure to show off her curves and cleavage, after recently announcing that she got rid of her “beer belly.”

Last week, the young mom flaunted her bare butt in a thong bikini by the swimming pool.

She took a dip in the water as she tried on a rainbow swimsuit, and appeared to be floating in the pool while lying on top of a white kickboard.

The former MTV star showed off her backside, flaunted her tattoos, and perked up her booty.

In the next image, Jenelle seemed to be kicking her legs in the pool while pushing the kickboard across.

The reality star captioned the post: “Suns out, buns out,” along with a peach and fire emoji.

She also gave a “summer tip” to her followers.

Jenelle mentioned that “switching from beer to wine has shrunk her stomach so much!”

A Teen Mom fan jumped to the comments section and wrote: “No gluten and fewer carbs.”

She replied: “Good point!” with an applause emoji.

Jenelle and her husband, David Eason, 33, are the parents of their 5-year-old daughter, Ensley.

She is also the mother of sons Jace, 13, and Kaiser, seven, from two different exes.

The couple has been sharing raunchy NSFW photos on their social media after recently joining OnlyFans.

InstagramJenelle showed off her body while enjoying a pool day[/caption]