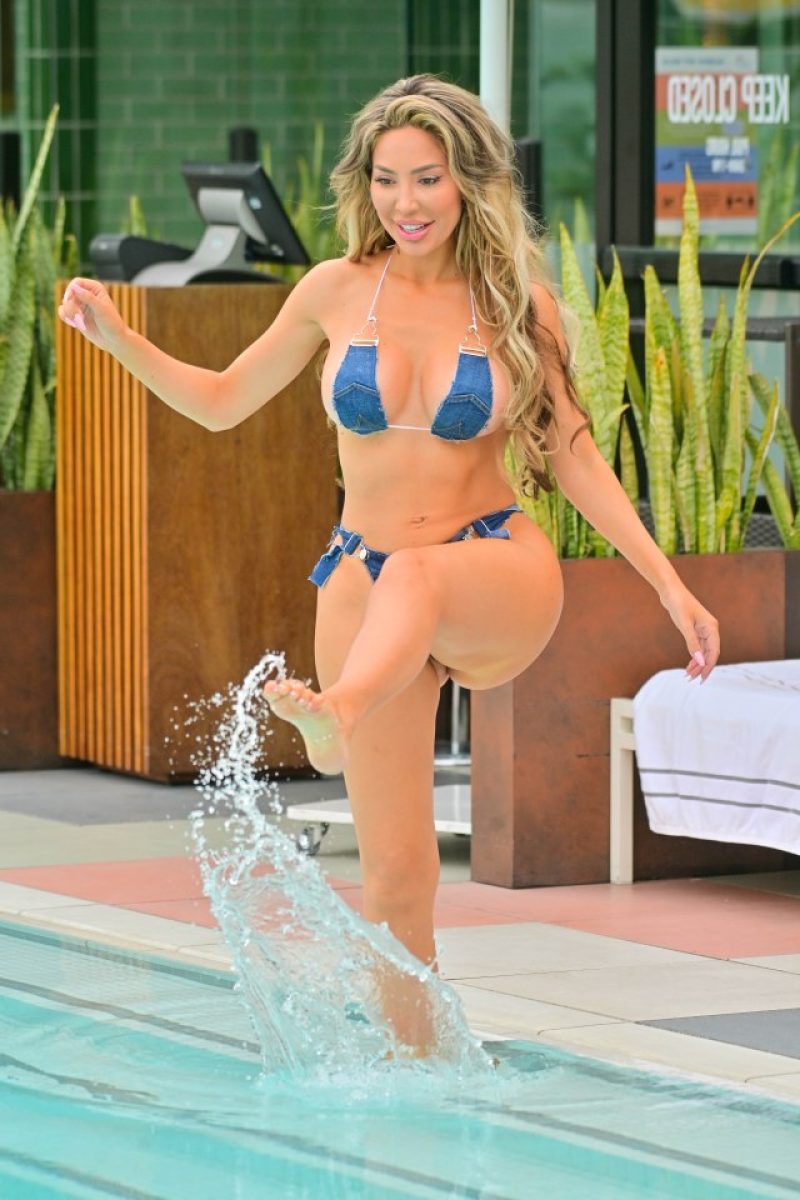 TEEN Mom star Farrah Abraham has shown off her curves while wearing a very tiny denim thong and bikini top.

The reality TV star splashed around in the water while at a beach in Los Angeles.

Farrah posed for pictures in a barely-there bikini that featured a denim top and bottom.

She first went barefoot and showed off her curvy backside in the thong.

The Teen Mom star then splashed around in the water and kicked her left leg up as she displayed her square bikini top, which resembled jean pockets.

The 31-year-old then posed for another picture sitting down.

She crossed her legs and smiled into the camera as she ran her fingers through her hair.

Then, later on, Farrah was seen sporting a super cropped, short-sleeved, denim jacket over the bathing suit.

The MTV star also walked by the pool with black cowboy boots and sunglasses on.

Farrah had no problem showing off her toned and curvy figure.

These photos come after Farrah was seen with a mystery man whom she was showing a lot of PDA with.

The 31-year-old was spotted out and about in Hollywood with her new man on Friday, showing off just how close the two are as she sat on his lap.

In exclusive new photos obtained by The Sun, Farrah and the mystery guy could be seen enjoying the day together, having a nice date at the sushi restaurant, Yamashiro.

When they weren’t eating, the pair showed off some extra PDA with a stop at an outside bench.

But that “relationship” didn’t last long.

Farrah told TMZ just days after their date that the pair had split.

She told the outlet that she won’t be pursuing anything further with him, saying, “Sometimes people turn into monsters with the press, happy I found out now.”

The former love interest was actually a longtime friend of Farrah’s known as Mack Lovat.

The drama in her love life happened after Farrah had the time of her life in Hawaii.

She celebrated her 31st birthday here with her daughter, Sophia, 13.

The Teen Mom OG alum enjoyed a lavish cake on the beach and set up a huge floral and balloon display to mark the big day.

Farrah seemed grateful for a vacation after enduring a tough start to the year.

She checked into rehab in March to help deal with trauma and completed a 28-day stint there.

It came after she was arrested in January following an altercation with security at a bar in Hollywood.

Farrah is no stranger to showing off her curves in barely any clothes.

She was seen laying in a leopard print lingerie set with one hand above her head and the other holding her phone.

The former MTV star made different faces as she turned the camera to capture several angles.

She resurfaced on her Instagram Stories shortly after her initial post with another look at more of the same outfit.

In her caption, she set the record straight amid rumors about her dating life.

The one-time Teen Mom star’s Story reads: “For the record, I’m happily single, I’m dating again & I’m the happiest I’ve ever been in my life.”

Fans have been concerned for Farrah after it looked like her face “was drooping” while posing in a tiny bikini in Hawaii.

Most, however, figured it was from Botox, which the reality star has much of in the past.