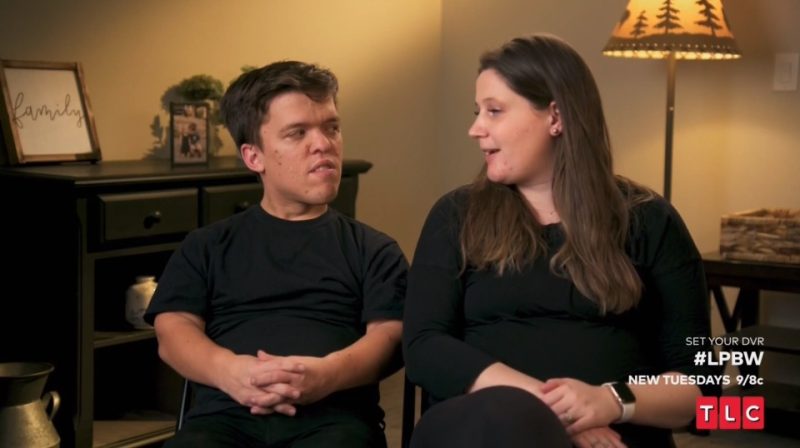 The father-son duo has been at odds after failing to reach an agreement regarding the sale of Roloff Farms.

During Tuesday’s episode of the TLC reality show, Zach and Tori are seen visiting with Matt and his wife Caryn.

The parents seem in a hurry to get their kids and leave, despite Zach’s father and stepmother’s desire to do things around the farm with them.

Fans took notice of Tori’s displeasure with the visit, claiming she was wearing it on her face throughout.

Some even accused her of intentionally getting between Zach and Matt, and even taking pleasure in the family feud.

After rounding up kids Jackson and Lilah, Tori says in a confessional: “I’m glad to leave.”

She further supported fans social media commentary about her not wanting to be there, saying: “I only showed up at the farm for the kids. I was just there so that they could be there, dress up and have some fun.”

Fans ripped the reality star as “bitter” on Twitter, with one writing: “So over Zach and Tori’s bitter, mean attitude. Sick of it. So hard to watch.”

Another Twitter user wrote during the episode: “Is anyone more entitled than Zack and Tori? I knew Tori would one day put a wedge between Zack and his family and tada here we are. She acted so ill mannered at the Pumpkin Patch.”

The drama didn’t stop there, either.

At one point, Zach asks: “Jackson, who should we invite?”

He runs through a long list of family members, eventually landing on Caryn.

Tori seems to gloss over her name, which she hadn’t done with previous family members.

In a confessional, she admits: “I’m not good at like watching everything I do and say because it might hurt somebody’s feelings and like I don’t always have a filter.”

Her husband adds: “But we invited my dad and Caryn. … That’s their grandpa. They want to see him.”

Fans had plenty to say about the way Tori and Zach handled themselves.

One critiqued: “Tori asking Jackson if they should invite his grandparents to the party is messy!!”

Another tweeted: “Tori says ‘we’re all adults here’ Really? So the silent treatment is how mature adults act like during disagreements?”

During a previous episode of the show, Zach revealed that because of the drama between himself and his father, he had opted to step back from his work on the farm.

Rather than help out during pumpkin season – a busy time on Roloff Farms – he decided to sit it out.

In a confessional, Zach says: “My dad and I could not come to an agreement on buying the farm, so with everything going on I made the decision not to work pumpkin season.

“I’m disenchanted by the whole thing, so, yeah. I’m stepping away.”

Instead, Matt enlisted ex Amy Roloff and her husband Chris Marek, who expressed a desire to work at Roloff Family Farms.

He took on a job as a tour guide, taking Amy, Caryn, and Matt for a test spin around the property.

During the episode, he also went on his first real tour guide ride.

While Zach has been reserved in sharing his opinions about his father for the most part, he has not always held back.

During the premiere, Zach ripped his father as a “bad grandparent” who doesn’t “value his family.”

Fans finally got a full glimpse into his side of the story when Little People, Big World premiered, and viewers criticized 53-year-old Caryn for her interference.

Zach recanted how it all allegedly went south as he wanted to buy the north side of the farm, his “favorite” part.

But on episode two, Caryn made her proud presence in the negotiations even more clear.

Caryn told her man as they took a stroll on the Oregon grounds, “Well I think it’s interesting about Zach and Tori [Roloff] moving to Battleground [Washington].”

Matt said in confessional, “A few weeks ago Zach came to me and said ‘I’d like to submit an offer’ … we sat face to face and it didn’t go well.”

“There’s been some tension between us.”

Caryn noted to Matt, “Now it seems the decision is done.”

“I didn’t need to be in the meeting but … I thought I’d go along.

“I didn’t think there were sides, it was a business transaction and it didn’t work out.”

Matt then concluded on the family pass-down that he passed on, “It may take years for people to see that but I think Zach and Tori not taking over the farm was a good thing.”

Caryn added there were “communication issues,” and Matt concluded as they walked: “You can’t hate your father and grandpa forever.”

Matt revealed that he put the farm up for sale, despite his son expressing interest in buying a portion of the property earlier, and Zach talked about it at length during an episode of the show.

“My dad was definitely encouraging the conversation, [wife] Tori and [Matt’s girlfriend] Caryn came too.”

“The north side is the 30 acres my mom and dad shared, and the whole thing was weird, he starts making excuses … suddenly me and my wife are not good enough to run the farm,” Zach shockingly explained in a confessional.

“Whether we don’t have the money, don’t have the skillset… Tori said, ‘it wasn’t cool, I never wanna see someone talk to my husband like that ever.’”

“The price was more than I can afford – was going off of what my dad bought my mom out for.”

But Zach said Matt had raised that price to a much higher one.

“He went beyond the normal appreciation,” he added.

He added: “I thought Caryn’s involvement altered it as well; ‘He can’t do that’ [she would say].”

This aired after the news of Matt putting the home on the market, which the father of four detailed in a lengthy Instagram post.

He explained his reasoning behind the sale, claiming his “twin boys” could not work together “toward a possible joint sale.”

Zach’s twin brother Jeremy previously expressed interest in purchasing a part of the farm, though that also didn’t materialize.

Matt claimed that Jeremy and Zach “decided individually that the timing was not right for them to purchase a part of the farm at this time.”

TLCHer in-laws, meanwhile, claimed they were trying to appease her[/caption]