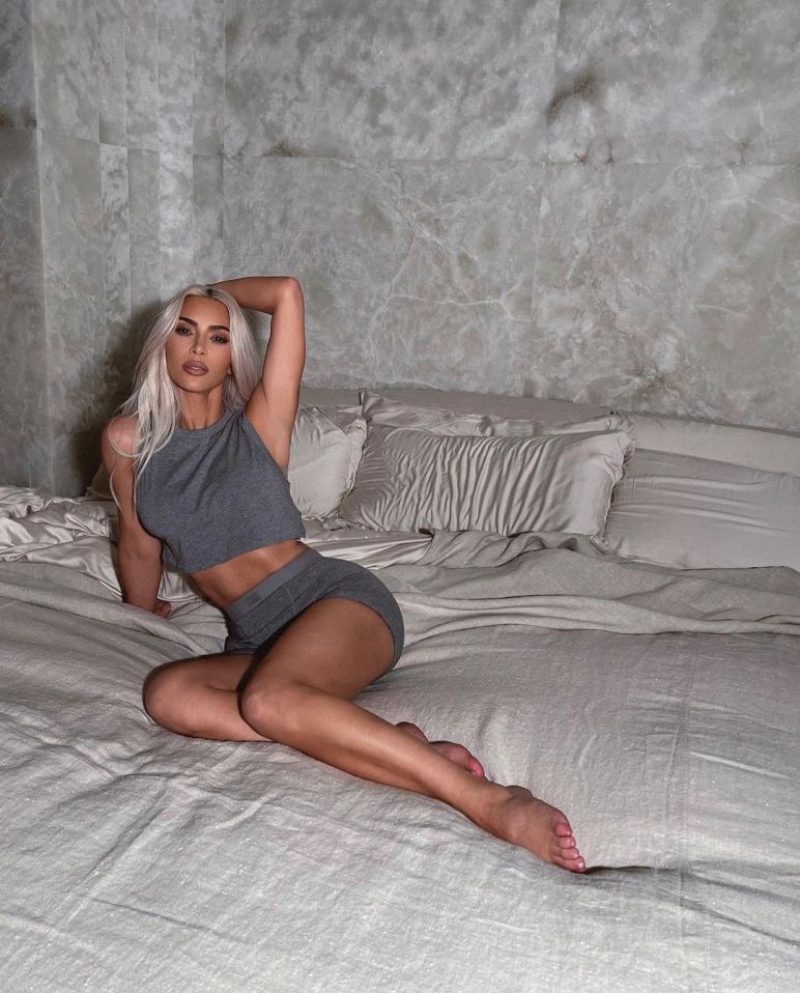 The Talentless entrepreneur has faced similar critiques in the past.

Instagram/Kim KardashianIn the photos, she’s seen posing on a pricy custom-designed bed in her underwear[/caption]

On Tuesday, Kim posted a series of photos of herself posing in a grey SKIMS underwear set in bed.

In the photos, Kim is seen striking various sexy poses, touseling her dyed blond hair in the first of the snaps.

She strikes a similar post in a third snap, running her fingers through her hair.

In a fourth snap, Kim stretches out on the bed, showcasing her whole body while making a sultry face.

A fifth and final photo shows her kneeling on the bed, looking directly into the lens.

Fans flocked to the comments to praise Kim’s looks and found Scott among them with an unusual message for the reality star.

He wrote: “Rick bed on fire,” with a flame emoji.

Rick in his comment refers to Rick Owens, the iconic designer responsible for several custom pieces in Kim’s house, including her bed.

As fans may have guessed, custom pieces don’t come cheap.

In 2013, Stylecaster reported that the Keeping Up With the Kardashians alum and her estranged husband Kanye West spent more than $1 million on beds for their home.

He told the magazine at the time: “That s**t weighs like a building.”

Rick designed on of the beds in 2010 and displayed it in the very first United States exhibition for his furniture designs.

The bed was made of alabaster and marble and had a matching daybed with it.

Together, the pair of pieces weighed two tons, according to T Magazine.

He has twice been slammed for making passes at Khloe Kardashian on The Kardashians.

During a recent episode, Khloe gave her sister’s former love interest a tour of her new house.

While showing him her pantry, the Good American founder asked him if he wanted a snack, like a gummy bear.

Scott responded: “Only if it’s going in your mouth.

“And you know what I’m talking about.”

Fans took to social media to weigh in on his word choice.

One fan stated: “Ew why does Scott have to be creepy every single episode? It’s not funny?”

Similarly, it’s not the first time Kim has been questioned for her design choices.

In 2021, the mom of four gave fans a glimpse inside her favorite room in her home and was ripped for it.

Kim shared a photo of her living room, which consisted of white carpet, three white chairs, a white coffee table, a white painting, an empty white fireplace, and white walls.

The reality star gushed that the space was her “fave room in my house”, though fans were shocked by the “empty” nature of the area.

“It’s so bland,” one wrote, with a sad face emoji, while another put simply: “Boring.”

“I just don’t get it, it’s so empty looking,” another agreed, as a fourth added: “It’s so empty.”

HuluFans slammed Scott Disick for his moment on the post[/caption]

ABCThe reality star has repeatedly been slammed for her beige, “empty” home[/caption]