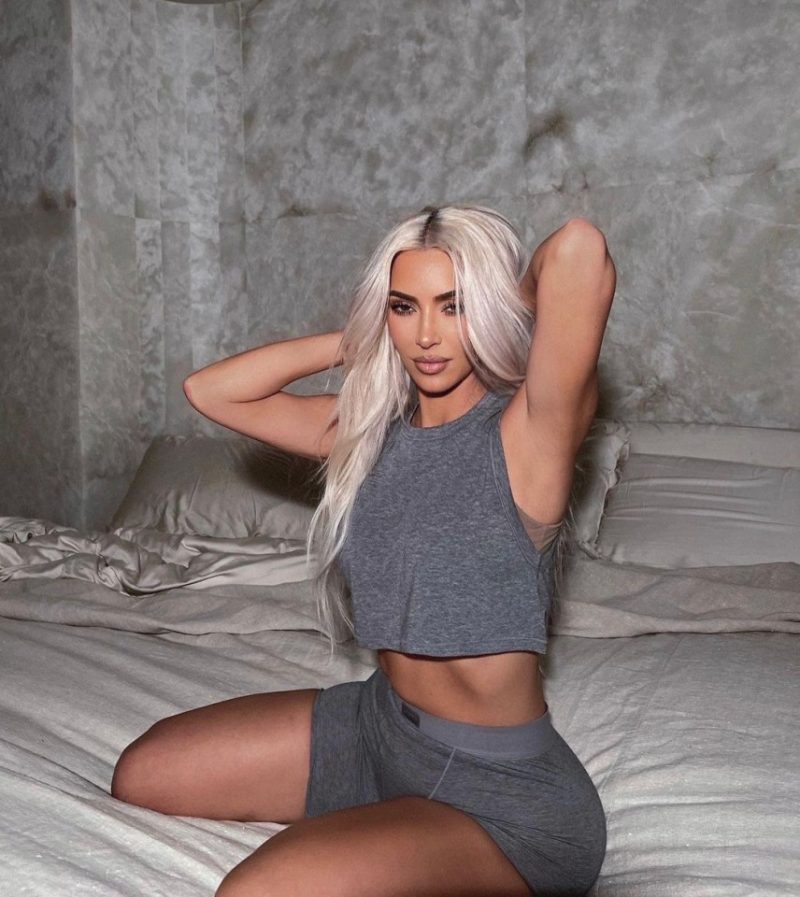 KIM Kardashian fans have slammed her for showing off her massive $220K marble bed after her family has been continuously accused of flaunting their wealth.

Billionaire Kim gave fans a rare look inside her bedroom with huge white marble slabs on the wall covering the majority of the room.

Wearing a grey crop top and matching shorts, Kim posed up a storm on her bed as she modelled the outfit.

In a series of images, Kim smouldered at the camera in front of the marble backdrop.

But fans were not impressed and ripped into her for flaunting her wealth.

Another posted: “Nothing like waking up being a Kardashian.”

A third said: “That Quartz on the back .”

This isn’t the first time that fans have commented on the Kardashian’s flaunting their wealth.

She launched her new nine-step skincare line, SKKN, with a price tag of nearly $650.

She paired the bejeweled silver corset top with matching high-waisted brief panties over top of a black bodysuit.

The designer fall 1991 corset top alone is re-selling on websites for nearly $4K, with the matching briefs going for $1K.

Kim showed off her sparkly outfit as she lounged in a chair, held a rose between her teeth, and posed between some mirrors.

As many fans clamored over her glittery look, the $5K outfit comes as the Kardashian family has been ripped for flaunting their wealth.

The reality star was previously slammed for spoiling her 3-year-old son Psalm with an emerald chain necklace.

Ajay Anand, CEO of Rare Carat Diamond Marketplace, told The Sun the impressive piece could be worth nearly $200K.

The jewelry designer exclusively told The Sun that the unique chain appeared to “contain over 40 carats of emeralds” of square-shaped and rectangular cuts.

Kim was also accused of being “out of touch” with her unattainable wealth when she “urged fans” to buy a $25K Hermès bag.

The star had posted an ad for the pricey Kelly mini bag on her former app.

Kim’s app launched in 2015, in which she shared pregnancy secrets, and beauty and workout tips, live-streamed with fans, and hosted giveaways for subscribers.

The app, along with her sisters’, stopped being updated in 2019 as fans didn’t want to pay to get updates from the reality stars.

Her app cost $3 per month for exclusive content and giveaways.

This was the mom of four’s second attempt at an app after she launched Kim Kardashian: Hollywood, which is still available to play via iPhone or iPad.

One Reddit user posted the screenshot of the ad with the title: “Back when Kim had an app give suggestions to her fans on what to buy.”

The advertisement read: “It’s a perfect size! I’m obsessed with mini bags right now. They’re the perfect accessories if you want to carry around the essentials. Below shop some of my favorite styles.”

The picture below had the picture of the black bag and a gold snap along with the price.

Fans retaliated on social media slamming Kim over the price of the handbag.

“Even if I could afford to spend that much money on a bag, I still wouldn’t,” someone commented.

Other fans in the comments were telling others that you can get the same exact bag on sites like Wish or Shein for less than $10.