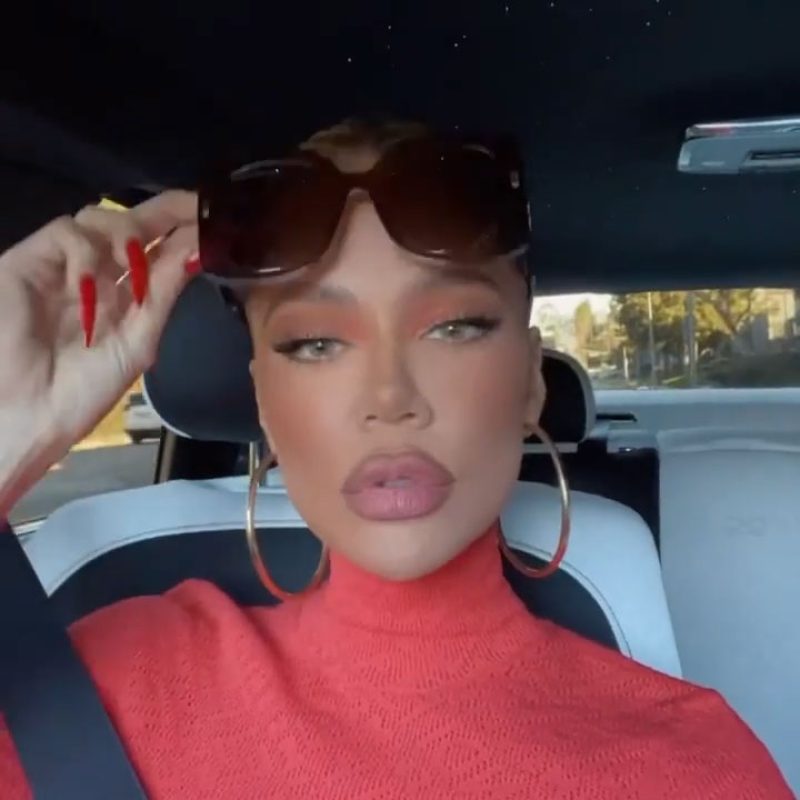 KARDASHIAN fans have become shocked as they discovered real unedited photos of Khloe after she shared the “photoshopped” version.

Khloe, 37, shared a snapshot and video from the inside of her car on Instagram.

In the photo, the Keeping Up With The Kardashians alum showed off her sharp red nails while sitting on her seat.

The E! star wore an orange-ish outfit along with round golden earrings.

The reality star combed her blonde hair tightly back.

She pouted her big lips at the camera.

Khloe captioned the post with an orange heart emoji.

In the boomerang, Khloe covered her eyes with the sunglasses and took them off.

She wrote: “Few more posts in threes and then I can’t keep this up anymore.”

The Kardashians star wore the same outfit during a recent installment of the Hulu show.

Khloe gave a tour of her new $17million Hidden Hills mansion to her mother, Kris Jenner, and her boyfriend, Corey Gamble, 41.

Her pantry was aligned with cabinets and the shelves neatly displayed numerous turntables of peanut butter, syrup, spices, and other items.

Shocked KUWTK fans on Reddit spotted major differences between Khloe on social media and on her reality show, such as eye color, the missing mole, and her thinner lips.

One critic said: “This has absolutely blown my mind!”

Another critic added: “I think it gets edited away because of the filters. She used to love that mole.”

A third critic mentioned: “The lips are clearly plumped up and over-lined, but still within the realm of ‘looks good.”

A fourth critic chimed in: “I think she looks cute without the photoshop.”

Recently, the Hulu star flaunted her tiny waist after working out in her private gym.

While posing next to a treadmill, Khloe wore a tight sports bra and workout pants.

The song Big Energy by Latto pumped in the background.

Fans have become concerned that the TV star has been looking “too thin” and unhealthy as she shared her weight loss journey.

She shares her daughter True, four, with her ex, Tristan Thompson, 31.

Some critics have argued that Khloe’s baby daddy has stressed her “to a bone” due to his love child scandal.

Tristan confessed he had an affair with his former mistress, Maralee Nichols, 42, and is the father of their six-month-old baby boy Theo.

Maralee gave birth to Theo back in December 2021.

In addition to Theo and True, Tristan is also the father of his son Prince, five, with ex Jordan Craig.