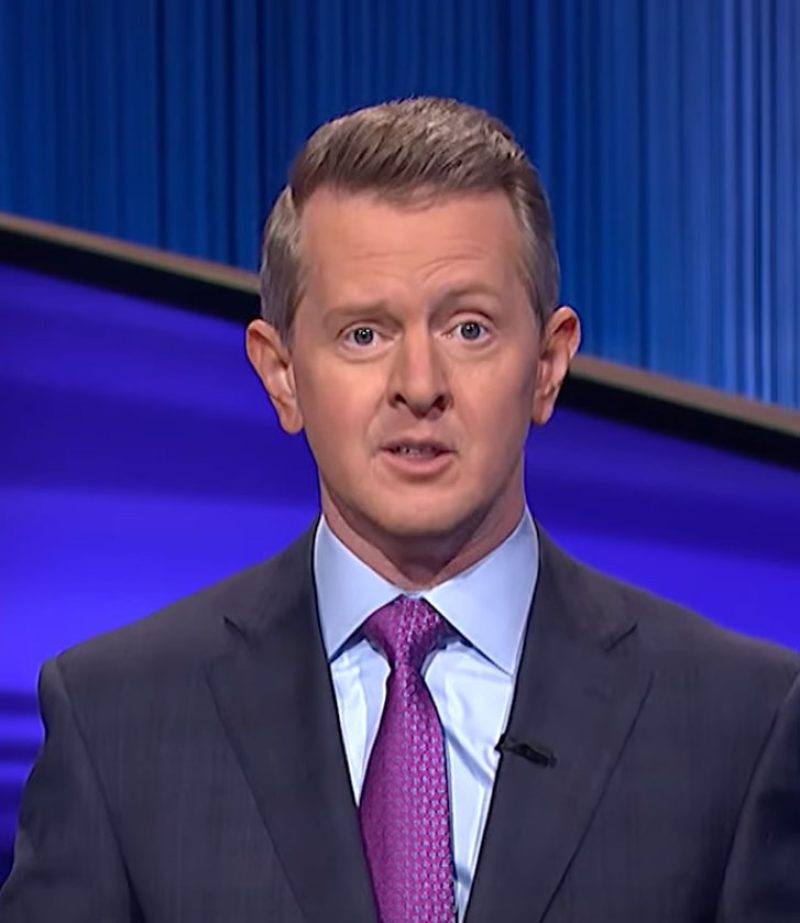 JEOPARDY’S Ken Jennings has trolled a fellow alum in a cruel way.

The host, who’s been quiet about the permanent gameshow gig, pushed rival Buzzy Cohen into a WILD makeover on Twitter.

YouTube/JeopardyJeopardy! host Ken Jennings has been quiet about quiz shows on Twitter since announcing he’d be leaving ‘for a few months’ in May[/caption]

Actress Mayim Bialik, 46, is hosting Jeopardy! after Ken’s prior three weeks at the helm and announcement he’d be out for “months.”

“I’m handing the keys back to the talented actor-producer-writer-director (!) Mayim Bialik for a few months,” the fan-favorite surprisingly tweeted in May, adding, “We are lucky to have her! I’ll be back before the end of the season.”

Many fans prefer Ken, 47, since he famously won the most games of Jeopardy! in 2004 and seems like the natural successor to Alex Trebek – promisingly revealing on a recent podcast episode he was doing more tapings of pre-recorded shows this month.

Jeopardy! fans slam Mayim for round that ‘makes no sense’ & stuns silent players

Jeopardy! hosts Ken & Mayim’s most controversial moments before one is picked

Austin David Cohen – or Buzzy Cohen – and have friendly but unquestionable history.

Buzzy appeared in nine games in April and May 2016 and was known as “Mr. Personality” by the late, great Alex.

During Ken’s current Jeopardy! hiatus, he has been quiet on Twitter – rarely posting about the gameshows or at all.

But he couldn’t resist hassling his fellow gameshow great into an act that’s nothing ‘short’ of ridiculous.

Buzzy went on to appear in the Jeopardy! All-Star Games relay tournament in 2019, and in 2021, hosted the Tournament of Champions, leading fans to beg for Jeopardy! to make him the permanent host.

Buzzy replaced Ken for Season 2 of ABC’s sister show The Chase last year – though many fans buzzed Ken’s leaving was another ‘clue’ he was getting closer to the big gig.

And speaking of buzzing, on June 8th, the well-dressed man posted a Twitter poll – and Ken couldn’t help himself.

“Should I shave my head?” Buzzy asked his 42K followers.

Regardless, the poll’s results weren’t cutting it with a slightly jealous Ken, so to speak, who put his weight behind Buzzy buzzing it off.

Ken tweeted just 10 minutes later, “‘Big No’ is way ahead right now, but if we successfully brigade this poll, Buzzy Cohen legally has to shave his head. Fly monkeys!”

Seemingly quoting The Wizard of Oz, “Big Yes” magically was head-and-shoulders ahead with 43%.

Another fan wrote, “I am at your service, KJ. Buzzy shall be buzzed.”

A third lamented “NOoooooooooooo!!!” as the sharp-dressed alum may indeed have his head shaved for upcoming episodes because of Ken.

To this day, Jeopardy! fans tweet #hirebuzzy alongside their takes, loving the bespectacled brainiac since he appeared on the show – it’s now down to the 74-game winner and Mayim.

Ken’s quiet hosting hiatus has included photos of mysterious trips to untagged locations, though knowledge-hungry fans spotted a visit to Hawaii as well as time spent at home in Washington.

Ken lives in a $3M mountainous mansion with his wife, two children and dog Chance – and has been there for eight years.

Plenty of fans have found the actress to be a perfectly plucky presence, especially as a front-seat passenger for Ryan’s sadly derailed streak which ended June 6th after 16 great wins.

But during his go, she had some speed bumps, including an NSFW off-color adlib about marijuana use, joking, “Joint committee, get it?”

Mayim also seemed to misunderstand the legacy of the band Queen and has regularly replied to other contestants’ earnest Q&A with jokes.

The host once bluntly replied to a player’s story about children’s autism research, “Glad to hear spitting in a tube went better than taking blood.”

And during the same round in a different game – one said he was in a “fancy sports league” and Mayim curtly responded: “That’s so thrilling,” and moved on.

Mayim had another Q&A story reaction that flatlined before Ken returned for his May stretch – she told a doctor he was “just an anesthesiologist, not a surgeon.”

Ken and Mayim began filling in for the legendary Alex after his tragic 2020 passing and a fleet of Season 37 celebrity guest hosts, including now-disgraced Mike Richards – Buzzy never got a chance at guesting the syndicated program.

The fact that the hosting slot is still undecided has been a huge point of discussion, as the late Alex had hosted since 1984.

As another fan tweeted recently, “I actually like both Ken and Mayim, so that’s that, at least for me,” though one more replied that the 74-game and Greatest of All Time winner, given his resume, is still a “better fit for the show” between them.

Canadian tutor Mattea Roach, Ryan, and Amy Schneider, Matt Amodio – all from this stunning season – will compete in the Tournament of Champions in November.

Even streak-holder Mattea stated after her run she wanted Ken to take over between the final two.

“As a contestant, there is something really special about being on stage with the greatest player of all time,” she told Vulture.

Speaking of Twitter, Ryan – whose heartfelt backstory and streak went viral like Mattea’s – was snubbed of a check mark last week while the Canadian champ got one.

TwitterBuzzy Cohen, Jeopardy! alum-turned Ken Jennings’ replacement on The Chase asked if he should shave his head[/caption]