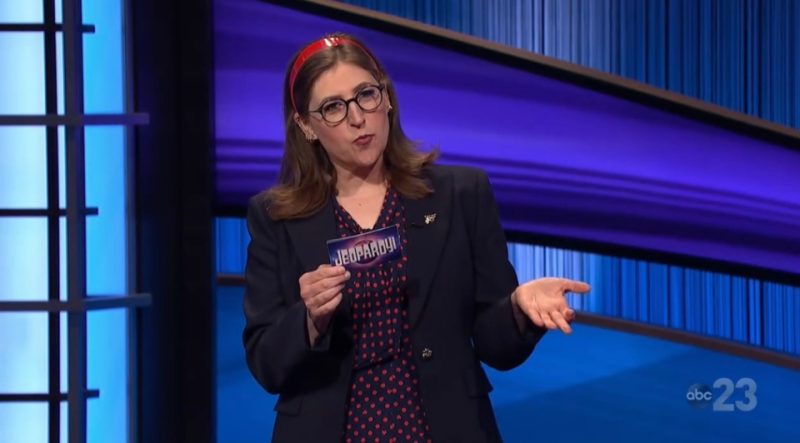 JEOPARDY! fans have come up with a theory for why host Mayim Bialik presented a “made up” category in Tuesday’s episode.

Viewers have been furious with the show ever since the 46-year-old read the clues that left them, as well as all three contestants, completely speechless.

ABCJeopardy! fans slammed host Mayim Bialik for presenting a ‘made up’ category during Tuesday’s show[/caption]

During regular Jeopardy!, Mayim presented all of the categories, including one titled “Texting Abbreviations.”

But the slang terms fans seem to be expecting were nowhere in sight.

Viewers slammed the host sharing clues from this category that had all of the contestants scratching their heads, especially as she revealed the answers as if they were obvious.

Now, some Redditers think they have a theory for how such a collection of clues could’ve been created in the first place.

Jeopardy! player has fans ‘laughing out loud’ with ‘brilliant’ but WRONG answer

One annoyed fan pointed out: “What’s so baffling is that there’s no shortage of actual texting abbreviations that they could use, but for some reason they choose to just make stuff up instead.”

The user then went on to share their behind-the-scenes theory.

“Theory: The clue writer responsible has been tricked into believing these are actual Gen-Z texting abbreviations by their bored teenager who’s been stuck at home for the last two years due to COVID,” they guessed.

The fan continued: “All the kid has to do is conspicuously use each one a couple times with their friends in front of their writer parent.

“And then make a few anonymous submissions to urbandictionary.com.”

Another said that the kids wouldn’t even have to go that far, saying they could “just text to mom or dad a few times and laugh that they don’t know that.”

With the category having no terminology that anyone expected, many wished they could get a do-over with it.

“Would be nice if at some point we could see clues about actual texting abbreviations instead of ones that look like they came straight from those ‘know what your kids are texting about’ guides,” one fan hoped.

Now two-day winner Eric – who bested champ Ryan Long Monday night – was able to correctly guess “Off To Bed?” but after that, they were anybody’s guess, or no one’s.

Mayim read another, “FC is this hopeful condition.”

When no player buzzed in and all three looked confused, she broke the silence with a cheery, “Finger’s crossed!”

“Please tell me more!” Mayim exclaimed as again no one on-stage replied and the audience laughed nervously.

The final clue read, “Where Have You Been? ‘LTNS’” – once more – no reply from any player.

Over on Twitter, fans didn’t abbreviate their anger over one of the lowest-scoring sections in recent memory – and felt that no one texted like that.

One fan accused: “I’m pretty sure those texting acronyms were made up.”

As a second wrote, “none of these texting abbreviations are real,” and a third simply called it a “stupid category.”

Mayim, 46, is hosting Jeopardy! for the fifth week in a row, returning after alum Ken Jennings’ prior three weeks at the helm and announcement he’d be out for “months.”

The permanent hosting slot is still on the board and will likely be decided by the end of Season 38 in July.

ABCSome viewers guessed that a Jeopardy! writer was tricked into using fake abbreviated by their ‘bored kids’[/caption]