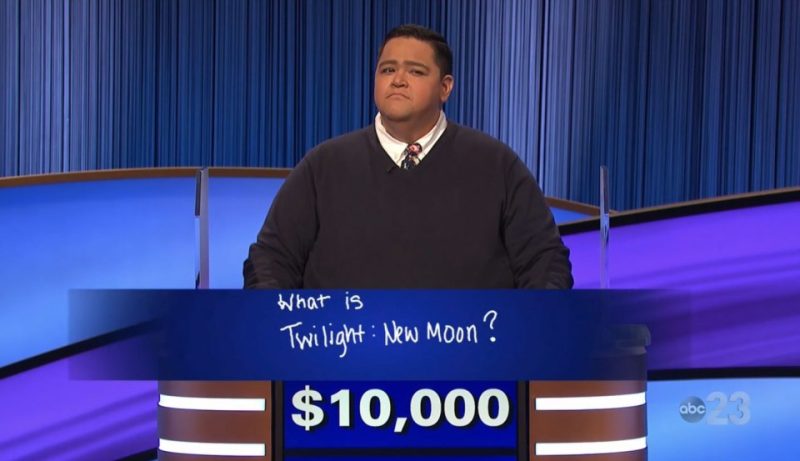 JEOPARDY! contestant Michael has left fans “laughing out loud” with his perfect but wrong final answer in Tuesday’s episode.

The player has continued to have some fun with his game show response with his humorous interactions with viewers on social media.

ABCHe called out Twilight: New Moon as his response, and viewers loved how he kept a straight face the whole time[/caption]

For Final Jeopardy!, the category was “Writing Old & New.”

The clue that host Mayim Bialik read, stated: “This 2013 bestseller shares its title with the first section of a poem from 7 centuries before.”

All three contestants got to work on their answers, and two out of three had the same, but still wrong, answers of Margaret Atwood’s The Handmaid’s Tale.

Michael also got the wrong response, but fans enjoyed his a lot more.

Jeopardy! fans slam Mayim for round that ‘makes no sense’ & stuns silent players

This made the whole crowd in the room laugh, as well as host Mayim as she told him he was incorrect.

He gave a cheeky “oh darn” snap in response.

Fans on Twitter shared their love for his fun answer, too, though many noted that at least New Moon was published in 2006, which was a lot closer to the year of 2013 in the clue, compared to 1985’s Handmaid’s Tale.

One fan told Michael on the social media platform: “I’ve never heard a jeopardy audience laugh like that, and you totally sold your inquisitive look to mayim waiting for the answer.

The contestant replied: “I remember having the conversation in my head. Do I play it straight or let everyone in on the joke?

Another fan tweeted: “The look on your face was absolutely hilarious! Thanks for being so much fun to watch!”

“I just watched and laughed out loud. You were brilliant,” a fourth told Michael.

Michael joked about the fun moment of his: “But for real, I promise I’ll mention the Twilight series fewer times if you bring me back.

In another tweet, he shared a PhotoShopped photo of the New Moon movie poster with his face over Bella’s.

He wrote along with it: “I got to make a spectacle of myself on #Jeopardy, my favorite TV show.

“I feel so completely honored to have shared a moment with these two impressively attractive people. @TaylorDLautner and Robert Pattinson.”

Though viewers found his wrong answer funny in the final round, they slammed host Mayim for a category earlier in the show that had all of the contestants scratching their heads.

During regular Jeopardy!, the category was titled “Texting Abbreviations.”

But the slang terms fans may have expected were nowhere to be found.

Now two-day winner Eric – who bested champ Ryan Long Monday night – was able to correctly guess “Off To Bed?” but after that, they were anybody’s guess, or no one’s.

Mayim read another, “FC is this hopeful condition.”

When no player buzzed in and all three looked confused, she broke the silence with a cheery, “Finger’s crossed!”

“Please tell me more!” Mayim exclaimed as again no one on-stage replied and the audience laughed nervously.

The final clue read, “Where Have You Been? ‘LTNS’” – once more – no reply from any player.

Over on Twitter, fans didn’t abbreviate their anger over one of the lowest-scoring sections in recent memory – and felt that no one texted like that.

One fan accused: “I’m pretty sure those texting acronyms were made up.”

As a second wrote, “none of these texting abbreviations are real,” and a third simply called it a “stupid category.”

Twitter/@mikeytoehillOn Twitter, he even shared a photo of himself edited into the New Moon movie poster[/caption]

ABCFans thanks Michael for being ‘so much fun to watch’[/caption]